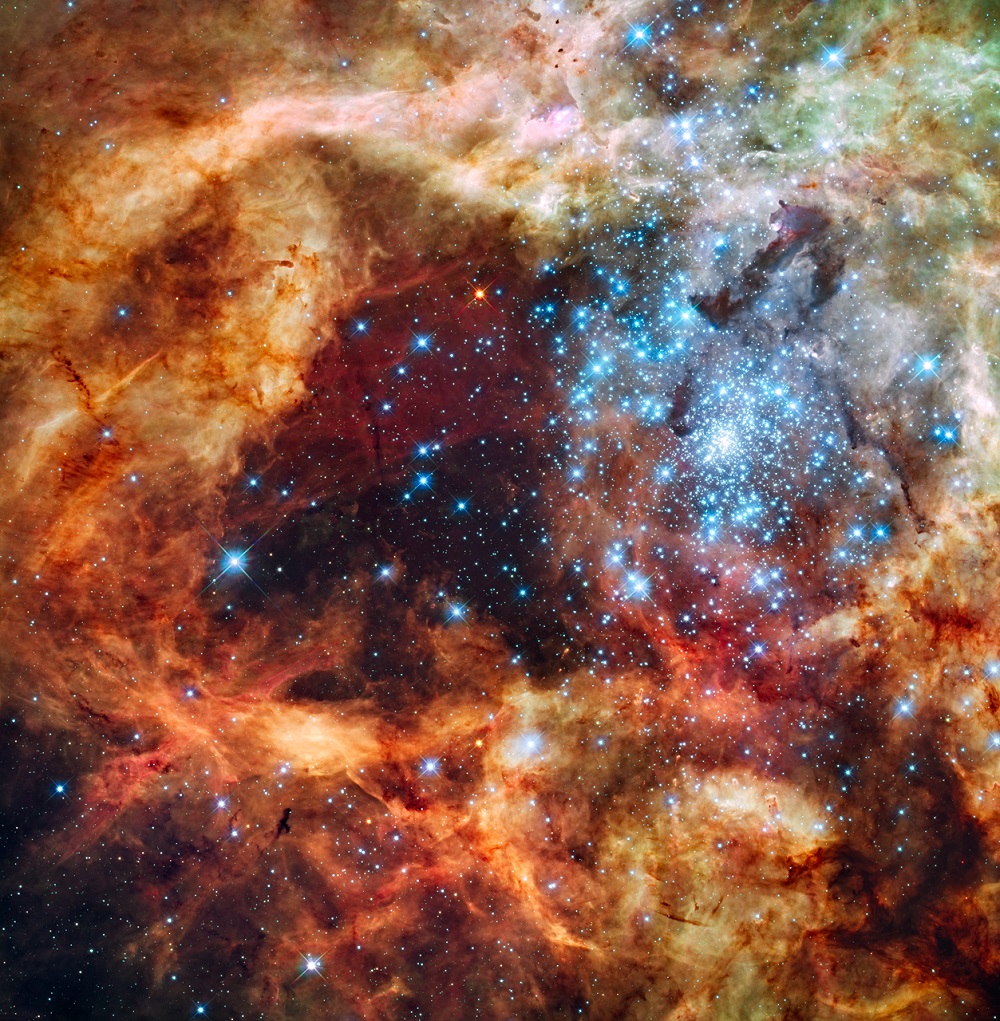 R136, formally known as RMC 136 (Radcliffe obs., Magellanic Clouds), is a young, massive star cluster surrounded by glowing clouds of some 100 light-years across. It lies near the center of the Tarantula Nebula (30 Doradus), a turbulent star-forming region in the Large Magellanic Cloud (LMC), a neighboring galaxy located about 163,000 light-years away in the southern constellation of Dorado (the Swordfish).

There is no known star-forming region in the Local Group as active and as luminous as the Tarantula Nebula, and R136 produces most of the energy that makes the Tarantula Nebula visible. R136, which is only between 1 and 2 million years old, contains hundreds of brilliant blue stars. It is the largest stellar nursery in our local galactic neighborhood with an estimated mass of 450,000 solar masses, what is suggesting that it will probably become a globular cluster in the future.

Many of the bright blue stars are among the most massive stars known, including several confirmed Wolf–Rayet stars, which are extremely rare (only about 300 are known presently) and short-lived super-hot blue giant stars. Several stars are over 100 times more massive than our Sun. These hefty stars are destined to explode as supernovae in a few million years.

The hot blue stars are carving deep cavities in the surrounding material by unleashing a torrent of ultraviolet light, and fierce stellar winds (streams of charged particles), which are etching away the enveloping hydrogen gas cloud in which the stars were born.

This image reveals a landscape of pillars, ridges, and valleys, as well as a dark region in the center that roughly looks like the outline of a holiday tree. Besides sculpting the gaseous terrain, the brilliant stars can also help create a successive generation of offspring. When the winds hit dense walls of gas, they create shocks, which may be generating a new wave of star birth.

The cluster is a rare, nearby example of the many super star clusters that formed in the distant, early Universe, when star birth and galaxy interactions were more frequent. Previous Hubble observations have shown astronomers that super star clusters in faraway galaxies are ubiquitous.

R136 is also home to R136a, which was once thought to be a hypergiant star of about 50 million miles in diameter. However, later it was found to be a dense star cluster containing a.o. twelve very massive and luminous stars. With masses in the range of 37 to 76 solar masses. Three closely packed, extremely luminous stars (R136a1, R136a2 and R136a3) dominate this cluster. One of the stars, R136a1, is the most massive star found to date with 265 solar masses, as well as the most luminous at 8,700,000 times the brightness of the Sun.

This image is created by observations taken in ultraviolet, visible, and red light on Oct. 20-27, 2009 with the Wide Field Planetary Camera 3 onboard the Hubble Space Telescope. The blue color is light from the hottest, most massive stars; the green from the glow of oxygen; and the red from fluorescing hydrogen. The nebula is close enough to Earth that Hubble can resolve individual stars, giving astronomers important information about the stars’ birth and evolution.