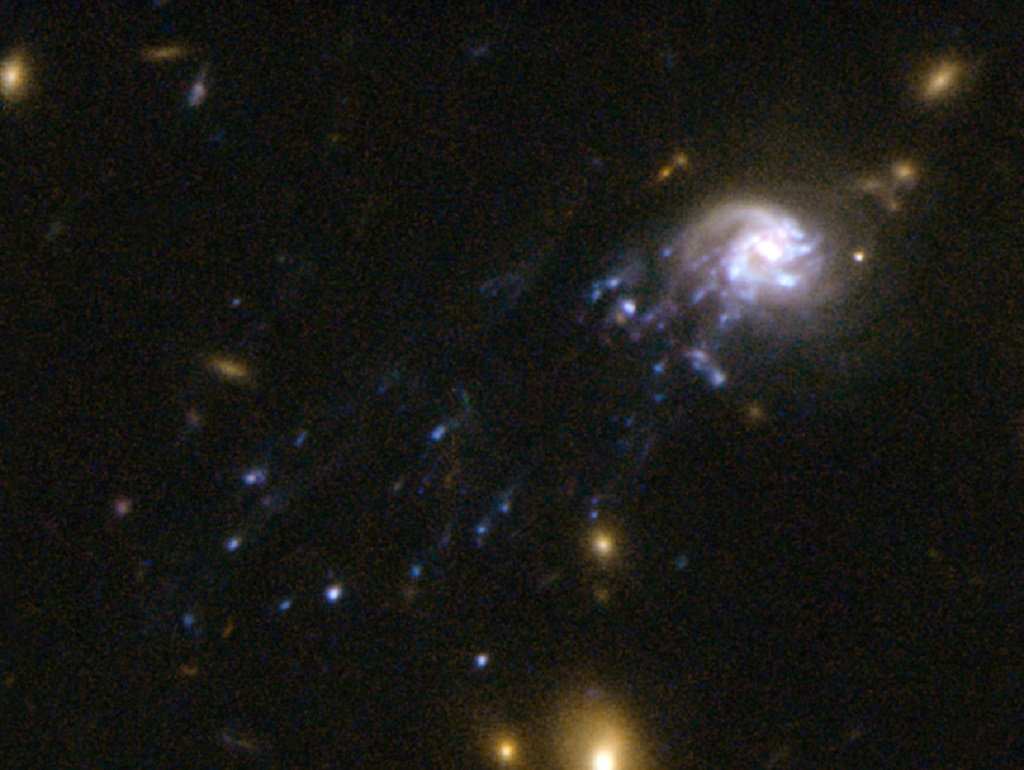 The Comet Galaxy is a spiral galaxy with a little more mass than our Milky Way galaxy, located 3.2 billion light-years away from Earth, within the galaxy cluster Abell 2667, in the small southern constellation of Sculptor. It was detected on 2 March 2007 with the Hubble Space Telescope.

This unique galaxy has an extended stream of bright blue knots and diffuse wisps of young stars. It rushes with 3.5 million kilometers (2 million miles) per hour through Abell 2667 and thereby like a comet shows a tail with a length of 600,000 light-years.

The Comet Galaxy is currently being ripped to pieces. Moving through a cluster at speeds of greater than 2 million kilometers, is one of the main reasons the gas and stars of the galaxy are being stripped away by the tidal forces of the cluster.

Also contributing to this destructive process is the pressure of the cluster’s hot gas plasma reaching temperatures as high as 10-100 million degrees. Scientists estimate that the total duration of the transformation process is close to one billion years. What is seen now in this Hubble image is roughly 200 million years into the process.

During the ram pressure stripping process, the charged particles strip and push away the infalling galaxy’s gas, just as the solar wind of charged particles pushes ionized gas away from a comet to create a gas tail. For this reason the scientists have nicknamed the stretched spiral the “Comet Galaxy.”

Even though its mass is slightly larger than that of the Milky Way, the spiral will inevitably lose all its gas and dust as well as its chance of generating new stars later, and become a gas-poor galaxy with an old population of red stars. The finding sheds light on the process by which gas-rich galaxies might evolve into gas-poor galaxies over billions of years. The new observations also reveal one mechanism for forming of “homeless” stars seen scattered throughout galaxy clusters.

This image is taken with the Wide Field Planetary Camera 2 onboard the Hubble Space Telescope using three different color filters.