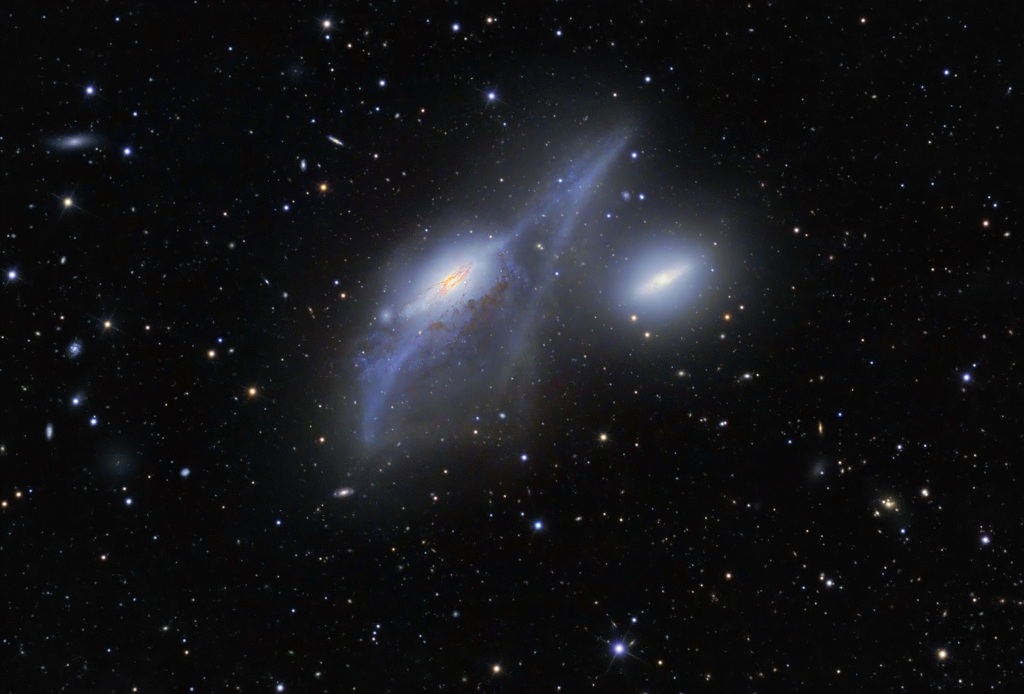 The Eyes (also called Markarian’s Eyes) are two galaxies (NGC 4438 (left) and NGC 4435), about 52 million light-years away and some 100,000 light-years apart in the constellation Virgo. They are rather prominent in Markarian’s Chain, a string of galaxies in the central core of the Virgo Galaxy Cluster.

NGC 4438, the larger galaxy, is thought to have once been a spiral galaxy that was strongly deformed by collisions in the relatively recent past. It has a highly distorted disk and long tidal tails. A lane of obscuring dust is visible just below its weak nucleus and young stars are visible to the left of its center.

NGC 4435 is a compact barred lenticular galaxy with a bright core of more than 50% of its diameter, and has a relatively young stellar population on its central regions (age of 190 million years). It seems to be almost devoid of gas and dust, but does have a very faint extension in the opposite direction of NGC 4438. It appears completely free of any tidal disturbances.

There is a debate about whether NGC 4435 and NGC 4438 are interacting.

According to one theory NGC 4435 is to blame. The effects seen in NGC 4438 were caused when the two galaxies came within about 16,000 light-years of each other about 100 million years ago. But while the more massive NGC 4438 was damaged, the smaller NGC 4435 was significantly more affected by the collision. Gravitational tides from this close encounter are probably responsible for ripping away their stars, gas, and dust. NGC 4438 managed to hold on to much of the material torn out in the collision, while material from NGC 4435 was more easily lost.

Another theory is that the giant elliptical galaxy Messier 86, further away from The Eyes, was responsible for the damage to NGC 4438. Recent observations have found filaments of ionized hydrogen gas connecting the two large galaxies, suggesting that they may have collided in the past.

In rich clusters of galaxies, such as the Virgo Cluster, galaxy collisions are fairly frequent, so it’s possible NGC 4438 suffered from encounters with both NGC 4435 and Messier 86.

There is uncertainty surrounding the energy mechanism that heats the nuclear source of NGC 4438; this may be a starburst region, or an active galactic nucleus powered by a supermassive black hole.

In this image you can also see many distant background galaxies.