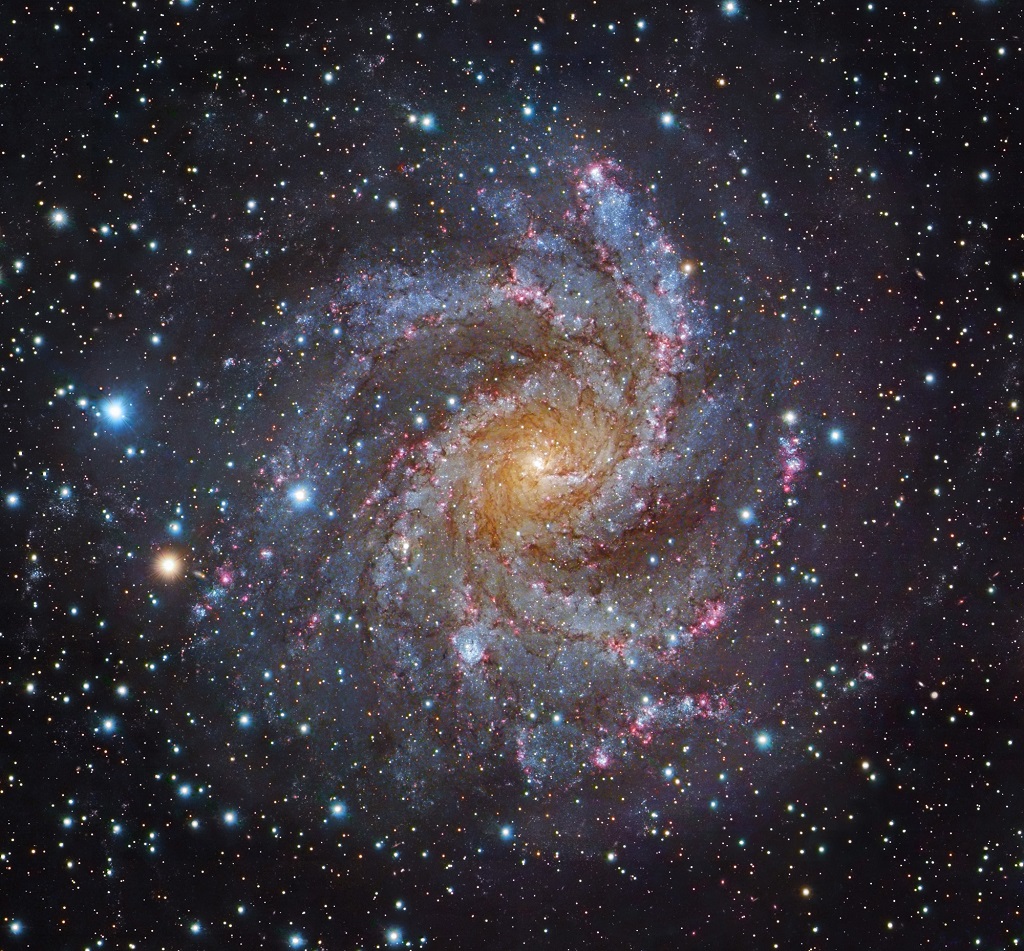 The Fireworks Galaxy (NGC 6946 or Arp 29) is an intermediate spiral galaxy of about 75 thousand light-years across, located just some 22.5 million light-years away, on the border between the northern constellations of Cepheus and Cygnus (the Swan). It is moving away from us at approximately 40 kilometers per second.

The galaxy has a peculiar multiple arm spiral structure which coalesces into four dominant spiral arms. Its colors change from the yellowish light of old stars in the center to young, bright blue star clusters and reddish star-forming regions along its spiral arms, while picturesque dark dust lanes are lacing the both the disk and the arms. It also has widespread high-velocity clouds associated with the disk. However, it is highly obscured by interstellar matter of our own Milky Way galaxy, as it is quite close to the galactic plane.

A peculiar stellar complex exists to the west of the galaxy center, at the end of a sub-branch of one of the main spiral arms. The arc shaped complex represents one of the brightest and largest young star clusters currently known in the disk of any spiral galaxy. The complex has a diameter of about 2,000 light-years and is composed of a group of highly luminous star clusters, each similar to the brightest young clusters in our Milky Way galaxy.

The center of the Fireworks galaxy is home to a nuclear starburst, in fact, this galaxy is undergoing a tremendous burst of star formation with no obvious cause. In many cases spirals light up when interacting with another galaxy, but this galaxy appears relatively isolated in space. An explanation for the high star formation rate is the recent accretion of many primordial low-mass neutral hydrogen clouds from the surrounding region.

This galaxy has an unusually large halo of neutral gas that extends out of the plane of the disk, rotating at a slower velocity than the disk. Extra-planar gas is a phenomenon peculiar to several other galaxies, including NGC 2403 and NGC 891, two galaxies with high rates of star formation. The phenomenon is likely due to a fountain effect where winds from high mass stars and supernovae blow gas out of the plane of the galaxy forming an extended gaseous halo structure.