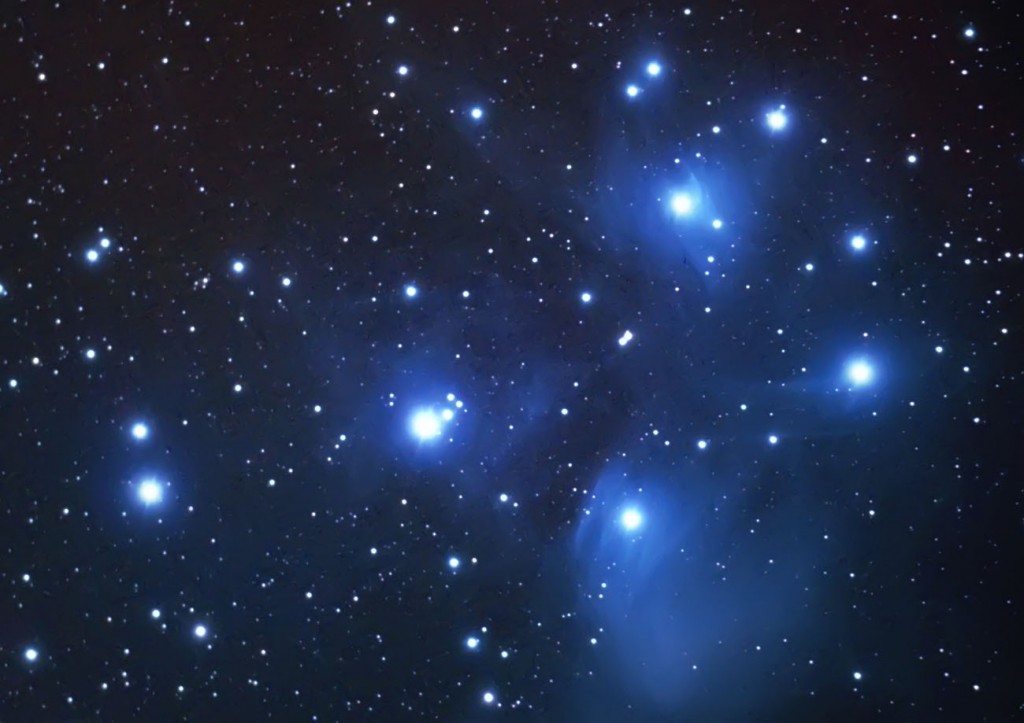 The Pleiades, or Seven Sisters (Messier 45 or M45) is a young and very bright open star cluster located between 391 and 456 light-years away in the northern constellation of Taurus, what makes it one of the nearest star clusters to Earth. The cluster core has a diameter of about 16 light-years while the total diameter is about 86 light-years. The total mass of the Pleiades is about 800 solar masses.

The cluster, which contains over 1,000 members, is dominated by hot blue and extremely luminous stars, several of which can be seen with the naked eye depending on local observing conditions. The nine brightest stars of the Pleiades are named for the seven daughters of “father” Atlas and “mother” Pleione: Alcyone, Asterope (a double star, also called Sterope), Electra, Maia, Merope, Taygeta and Celaeno.

The cluster also contains many brown dwarfs, which are objects with less than about 8% of the Sun’s mass, not heavy enough for nuclear fusion reactions to start in their cores and become proper stars. They may constitute up to 25% of the total population of the cluster, although they contribute less than 2% of the total mass. Astronomers have made great efforts to find and analyse brown dwarfs in the Pleiades and other young clusters, because they are still relatively bright and observable, while brown dwarfs in older clusters have faded and are much more difficult to study.

Under ideal observing conditions, some hint of nebulosity may also be seen around the cluster. This is a reflection nebula, caused by dust reflecting the blue light of the hot, young stars. It was formerly thought that the dust was left over from the formation of the cluster, but at the age of about 100 million years, almost all the dust originally present would have been dispersed by radiation pressure. Instead, it seems that the cluster is simply passing through a particularly dusty region of the interstellar medium.

Like most open clusters, the Pleiades will not stay gravitationally bound forever, as some component stars will be ejected after close encounters and others will be stripped by tidal gravitational fields. Calculations suggest that the cluster will take about 250 million years to disperse, with gravitational interactions with giant molecular clouds and the spiral arms of our galaxy also hastening its demise.