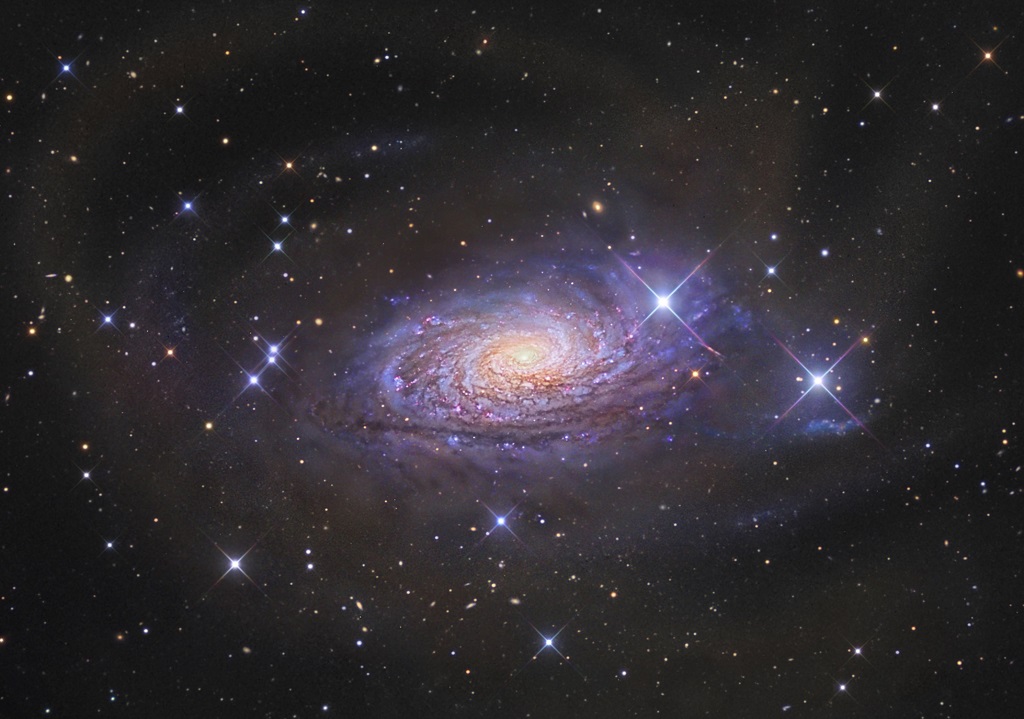 The Sunflower Galaxy (also known as Messier 63 or NGC 5055) is a spiral galaxy of nearly 100,000 light-years across – so, about the size of our own Milky Way, located about 37 light-years away in the small northern constellation of Canes Venatici (the Hunting Dogs), while it is receding from us at some 504 kilometers per second. It is part of the M51 Group, a group of galaxies that also includes the Whirlpool Galaxy (Messier 51).

The galaxy consists of a bright yellowish core, a highly warped disk and many blue, patchy spiral arms, streaked with dark dust lanes that can be traced all the way down into the galaxy’s nucleus, forming a ring around the densest region of stars at its center. The galaxy is dotted with pink star forming regions and numerous blue star clusters and has probably undergone bursts of intense star formation.

While gigantic elliptical galaxies are believed to result when two or more massive precursor galaxies merge, spiral galaxies, such as our own Milky Way, grow by swallowing smaller dwarf galaxies.

When a spiral galaxy is approached by a much smaller companion, the larger galaxy’s uneven gravitational pull will start to severely distort the smaller star system. Over the course of a few billion years, tendril-like structures develop. In one typical outcome, the smaller galaxy is transformed into an elongated tidal stream consisting of stars that, over the course of billions more years, eventually join the galaxy’s regular stellar inventory through a process of complete assimilation. Major tidal streams with masses between 1 and 5 percent of the parent’s total mass are quite common in spiral galaxies.

Faint stellar streams around the Sunflower Galaxy are the remnants of a much smaller dwarf galaxy that was disrupted by the large spiral in a minor merger sometime within the last 5 billion years. The progenitor satellite’s current position and final fate are unknown. The Sunflower Galaxy represents one of several recently discovered examples of an isolated spiral galaxy with a warped disk showing strong evidence of an ongoing minor merger. Other faint, blue “plumes” in the outskirts of the galaxy’s disk – probably unrelated to the tidal stream – are likely extended spiral features related to the galaxy’s complex spiral structure.

On May 25, 1971, a Type I supernova (SN 1971I) with a magnitude of 11.8 appeared in one of the spiral arms of the Sunflower Galaxy. A Type Ia supernova is a result from the violent explosion of a white dwarf star (a compact star that has ceased fusion in its core).

You can easily find the Sunflower Galaxy: 6 ° south of the Whirlpool Galaxy, and not far from Messier 94. The galaxy is visible with a (large) binocular; a telescope shows a bright star-like core, surrounded by a fainter halo, while in larger telescopes under a dark sky, the spiral arms can also be seen.