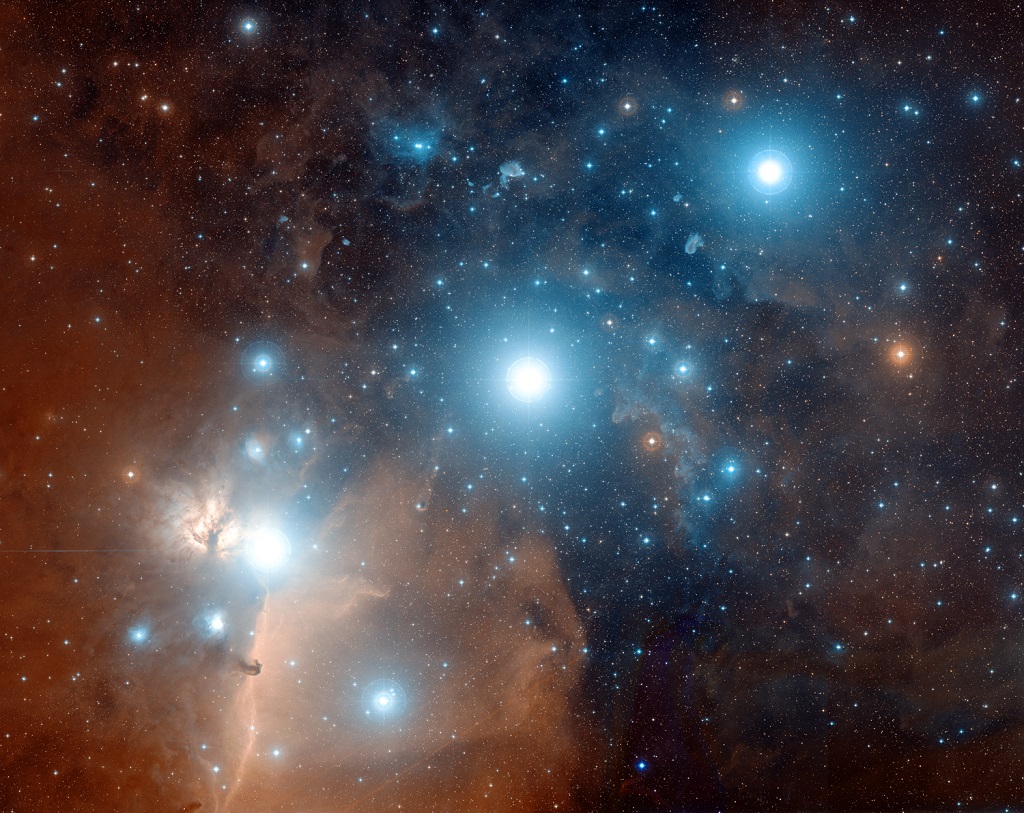 Orion’s Belt or the Belt of Orion is an asterism in the constellation of Orion (the Hunter). It consists of the three bright white-blue stars (from east to west or from left to right) Alnitak, Alnilam and Mintaka, which are more or less evenly spaced in a straight line, and so can be visualized as the belt of the hunter’s clothing.

An asterism is a pattern of stars in the night sky, in most cases composed of stars which are not physically related, and which are often located at significantly different distances from Earth.

The constellation Orion is in the southwestern sky if you are in the Northern Hemisphere or the northwestern sky if you are in the Southern Hemisphere, and also includes the bright stars Hatsya, which establishes the tip of Orion’s sword that hangs off the belt, Meissa, which forms Orion’s head, Saiph, which serves as Orion’s right knee, Rigel which forms the hunter’s left knee, and Betelgeuse, which is one of the largest known red giants, which forms the armpit.

Alnitak (also known as Zeta Orionis and 50 Orionis) is a triple star system at the eastern end of Orion’s belt, and is 736 light-years away from the Earth. The bright star shines energetic ultraviolet light into the Flame Nebula, IC 434 and The Horsehead Nebula. It has 100,000 times the luminosity of our Sun. The primary (Alnitak A) is itself a close binary, comprising Alnitak Aa (a blue supergiant) and Alnitak Ab (a blue dwarf). Aa is estimated to be 20 times bigger than the Sun and up to 28 times as massive. Alnitak B is a 4th magnitude star which orbits Alnitak A every 1500 years. The fourth star, Alnitak C, has not been confirmed to be part of the Altinak-system, and may simply lie along the line of sight.

Alnilam (also known as Epsilon Orionis and 46 Orionis) is the middle star and lies approximately 1340 light-years away from Earth. It shines with magnitude 1.70, and considering ultraviolet light Alnilam is 375,000 times more luminous than our Sun. It is a blue-white supergiant star, and the 30th brightest star in the sky (the 4th brightest in Orion). This star is one of the 57 stars used in celestial navigation.

Within the next million years, Alnilam may turn into a red supergiant and explode as a supernova. It is surrounded by a molecular cloud, NGC 1990, which it brightens to make a reflection nebula. Its stellar winds may reach up to 2000 kilometers per second, causing it to lose mass about 20 million times more rapidly than the Sun.

Mintaka (also known as Delta Orionis and 34 Orionis) is a double star located 690 light-years away and which shines with magnitude 2.21. It is 90,000 times more luminous than the Sun with a mass of some 20 solar masses. The stars of this binary system orbit around each other every 5.73 days.

The three stars that make up the belt of Orion are known by many names across many ancient and current cultures. Today they are known in Spain, Portugal and South America as “Las Tres Marías”. In the Philippines and Puerto Rico they are called the Los Tres Reyes Magos. In England: Jacob’s Rod or Staff; Peter’s Staff; the Golden Yard-arm; the L, or Ell; the Ell and Yard; the Yard-stick, and more.

The color picture was composited from digitized black and white photographic plates recorded through red and blue astronomical filters, with a computer synthesized green channel. The plates were taken using the Samuel Oschin Telescope, a wide-field survey instrument at Palomar Observatory, between 1987 and 1991.