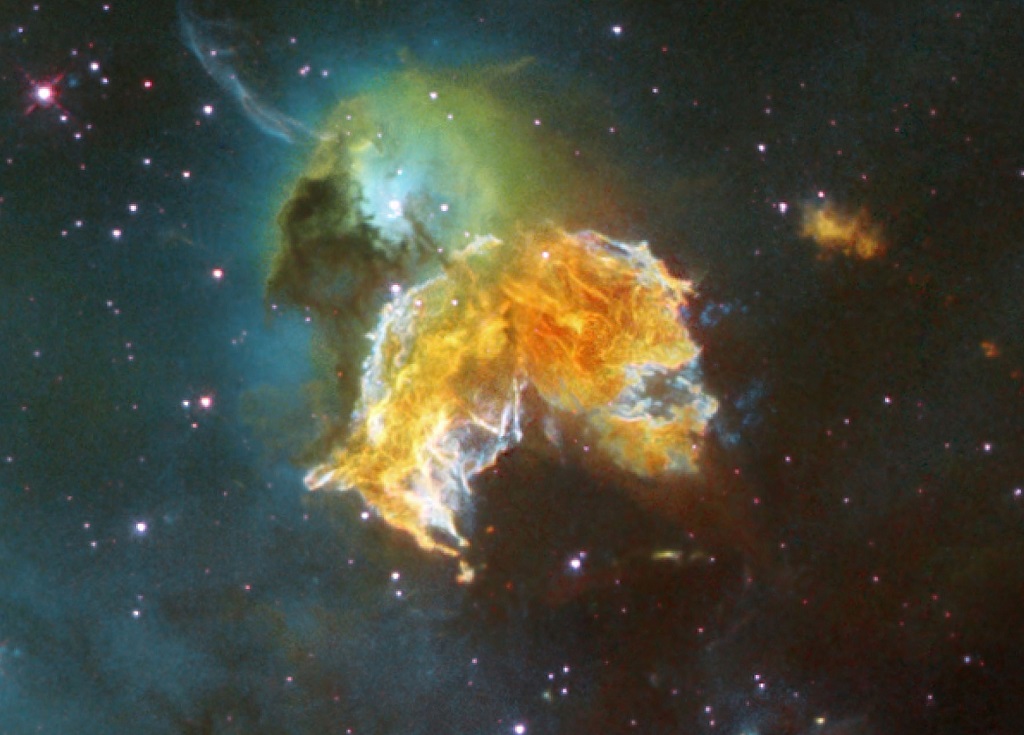 N 63A is a supernova remnant that spans over 25 light-years and is located in N 63, a star-forming region in the Large Magellanic Cloud, a satellite of our Milky Way that lies about 163,000 light-years away from Earth in the southern constellation of Dorado (the Swordfish).

This chaotic cloud of gas and dust is left behind by a massive star that exploded about 2,000 years ago, spewing out its gaseous layers into the already turbulent, star-forming region in the Large Magellanic Cloud.

Numerous of the stars in the immediate vicinity of N 63A are extremely massive. The star that produced this supernova remnant was probably 50 times the mass of our Sun. Such a massive star has strong stellar winds that can clear away the gas around it and form a wind-blown bubble. The supernova that formed N 63A is thought to have exploded inside the central cavity of such a wind-blown bubble, which was itself embedded in a clumpy portion of the LMC’s interstellar medium.

Mini-clouds that were too dense for the stellar wind to clear away are now engulfed in the bubble interior. The supernova generated a shockwave that continues to move rapidly through the low-density bubble interior, and shocks these mini-clouds, shredding them fiercely.

Supernova remnants have long been thought to set off episodes of star formation when their expanding shock encounters nearby gas. However, N 63A is still young and its shocks destroy the ambient gas clouds, rather than forcing them to collapse and form stars.

Data obtained at various wavelengths reveal on-going formation of stars at 10-15 light-years from N 63A. In a few million years, the supernova ejecta from N 63A would reach this star-formation site and may be incorporated into the formation of planets around Sun-like stars there, much like the early history of the Solar System.

The image is a color representation of data taken in 1997 and 2000 with the Wide Field Planetary Camera 2 onboard the Hubble Space. Color filters were used to sample light emitted by sulfur (shown in red), oxygen (shown in blue), and hydrogen (shown in green).