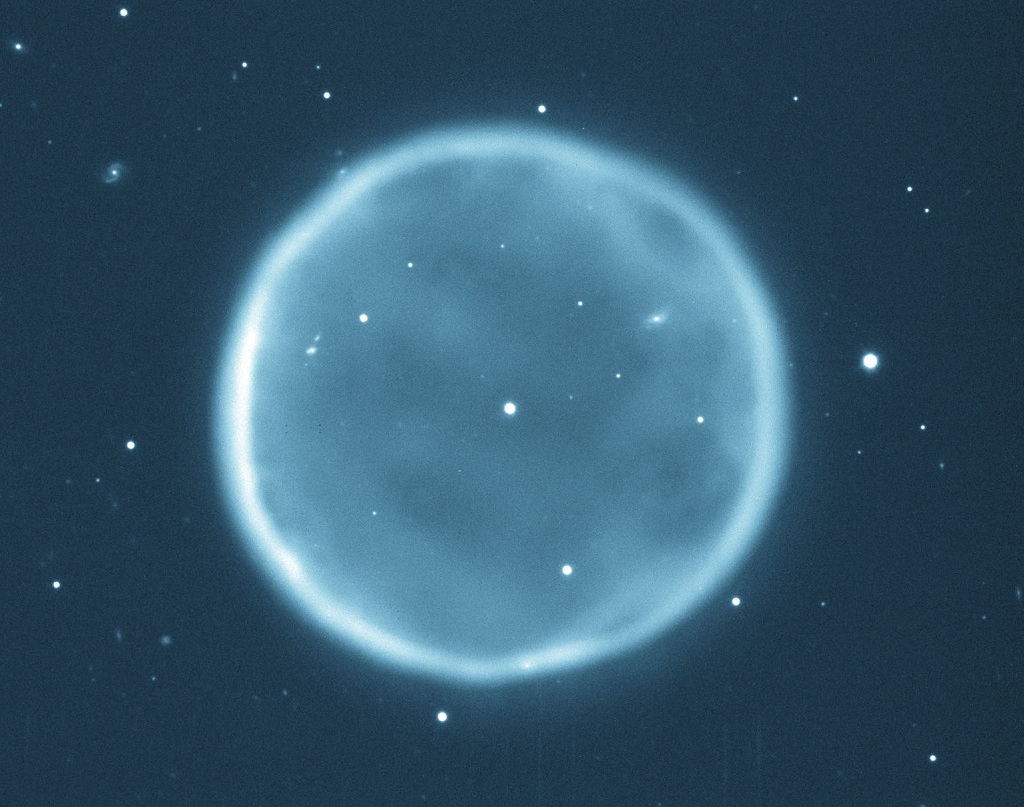 Abell 39 is an almost perfectly spherical planetary nebula with a low surface brightness. It is located some 6.800 light-years away in the constellation of Hercules and about 4,600 light-years above the Galactic plane — the plane in which the majority of the Milky Way galaxy’s mass lies. With a diameter of about 5 light-years it is one of the largest known spheres.

Planetary nebulae have nothing to do with planets except that to early astronomers these round objects looked like the planets Uranus and Neptune. Planetary nebula are the last stage of life for stars like our Sun. After billions of years, stars reach a point where there is little hydrogen gas to burn. To help convert their stellar furnaces to burn other elements such as helium, the star balloons in size to become a red giant. Eventually, however, the star collapses back on itself. This increases the temperature at its core and most of the stars material is catapulted into space, forming a bubble around the star. Then the star cools down to become a white dwarf.

Abell 39 is also formed as a once Sun-like star expelled its outer atmosphere over a period of thousands of years. Still visible, the nebula’s central star is evolving into a hot white dwarf.

Abell 39 has a nearly uniform shell. However, one side of the nebula is 50% more luminous than the other. Additionally, irregularities in the surface brightness are seen across the face of the shell. The source of the asymmetry is not known but it could be related to the offset of the central star.

The thickness of the spherical shell is about a third of a light-year.There is a faint halo that extends beyond the bright rim. Abell 39 has been expanding for about 22,100 years, based on its radius and an assumed expansion velocity between 32 and 37 kilometers per second.

Its shape has allowed astronomers to accurately estimate how much relative material in the nebula is absorbing and emitting light. Observations indicate that Abell 39 contains only about half the abundance of oxygen found in the Sun.

Background galaxies are visible near the nebula, and some can be seen through the translucent nebula.