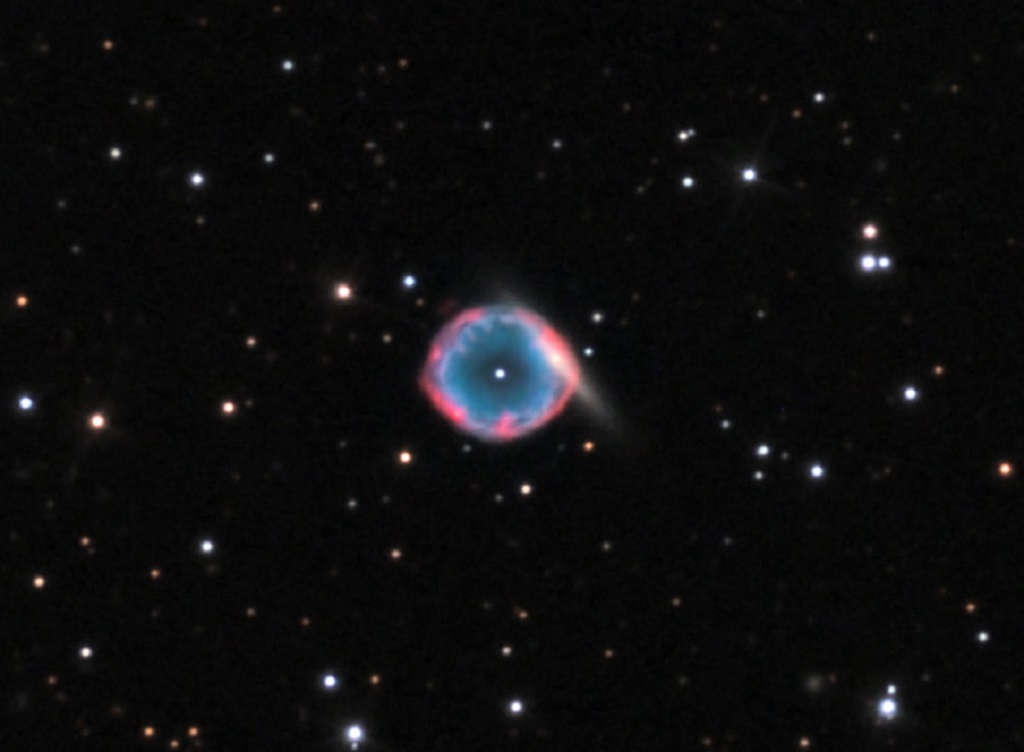 Abell 70 (also known as PN G038.1-25.4) is a planetary nebula that lies between 13,500 and 17,500 light-years away from Earth in the northern constellation of Aquila (the Eagle). It is approaching us at about 79 kilometers per second, while it is expanding at approximately 38 kilometers per second.

This ring-shaped planetary nebula with a patchy surface was only discovered in 1955 by George Abell. Its northern edge seems to be illuminated by a light streak with an even brighter knot in its center. This is an edge-on radio galaxy shining through the nebula, called PMN J2033-0656. This galaxy, which is probably several million light-years away from us, appears to be about the same size as the relatively nearby planetary nebula, but, of course, is much larger. Abell 70 just happens to be in the line of sight between us and the distant galaxy.

The central star of Abell 70 is found to be a special type of binary system, with only two or three known analogues, consisting of a hot white dwarf and a barium star, a cool red giant with an overabundance of singly ionized barium (Ba II) as well as a high abundance of carbon and other heavy elements such as singly ionized strontium (Sr II).

Planetary nebulae last for only about 10,000 years, a very short period in the 10-billion-year lifespan of Sun-like stars. So, over the next several thousand years, Abell 70 will gradually disperse into space, and then the white dwarf will cool and fade away for billions of years. Our own Sun is expected to undergo a similar fate, but fortunately this will not occur until some 5 billion years from now.

This image is taken in May 2013 with a SBIG STX16803 CCD Camera on the 32-inch Schulman Telescope (RCOS) at the Mount Lemmon SkyCenter, using an Astrodon Gen II filter.