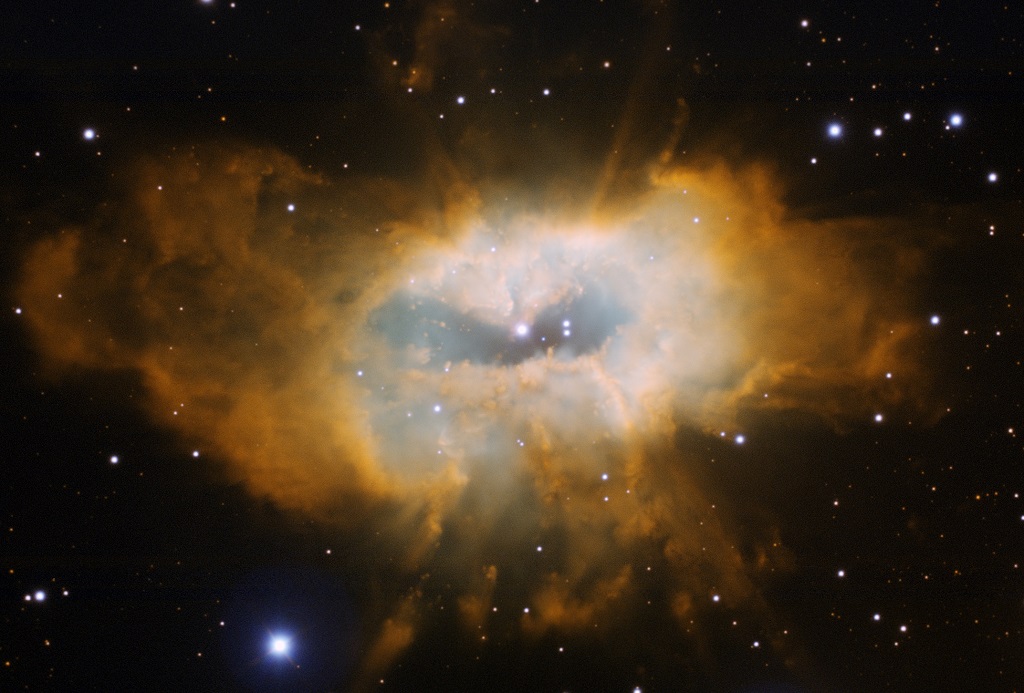 Sh2-71 (Sharpless 71) is an unusual and complex planetary nebula located about 3,260 light-years away from Earth in the northern constellation of Aquila (the Eagle). It is embroiled in a bit of controversy over its “birth parents”.

Sh2-71 is the 71st object in a catalogue of nebulae originally assembled by the U.S. astronomer Stewart Sharpless of the US Naval Observatory in Flagstaff, Arizona. It is from his second catalogue, of 313 nebulae, published in 1959. (In fact there are more than 313 objects as subsequent research has shown that some of the Sharpless nebulae consist of more than one object.)

Planetary nebulae represent the final brief stage in the life of a medium-sized star like our Sun. While consuming the last of the fuel in its core, the dying star expels a large portion of its outer envelope. This material then becomes heated by the radiation from the stellar remnant and radiates, producing glowing clouds of gas. They are called “planetary” nebulae because early observers thought they looked like planets; but they don’t have anything to do with planets at all.

Astronomers long assumed that Sh2-71 formed from the death throes of the brightest star (a binary system) which lies very close to the center of the nebula’s gas shell. But new observations have shown that the nature of a dimmer, bluer star – just to the right, and a bit lower than the bright central star – might provide a better fit for the nebula’s “birth parent.”

The uncertainty arises from the fact that the brighter central star doesn’t appear to radiate enough high-energy (ultraviolet) light to cause the surrounding gas to glow as intensely as it does, whereas the dimmer, bluer star likely does. On the other hand, the brighter star’s binary nature would help explain the nebula’s asymmetrical structure. Astronomers do not yet known if the dimmer, bluer star also has a companion.

Another unresolved issue is whether the brighter star’s unseen companion might be hot enough to excite the gas to glow. If so, this pair might be able to hold on to its parental connection to the nebula.

However, at the assumed distance to the nebula, the faint star has about the right brightness to be the fading remnant of the nebula’s progenitor star. Then again, the brighter binary star is an uncommon one that shows strong and broad hydrogen-alpha emission, which are seen in some planetary nebulae.

Putting aside the complex issue of which star or stars formed Sh2-71, the nebula’s striking morphology also poses questions. The nebula presents a multi-polar structure and several pairs of bipolar lobes at different orientations that formed at different times and likely involved a binary progenitor.

Adding to the puzzle, astronomers have recently discovered faint outer wisps and lobes surrounding Sh2-71 on deep hydrogen-alpha images. These features extend over many arcminutes (not shown in this image), suggesting the mass loss history of this nebula has even more levels of complexity.

The chaotic morphology of Sh2-71 implies that very complex processes have been involved in its formation. Often planetary nebulae appear quite symmetrical, but when multiple stars are involved, their structure looks much more complex. In such cases, astronomers believe that the transfer of gas from one star to another results in explosions and eruptions that disrupt the symmetry of the nebula – as is clearly seen in this image.

This Gemini Legacy image is taken with the Gemini Multi-Object Spectrograph on Gemini North of the Gemini Observatory on Mauna Kea in Hawai‘I. The color image is composed of three narrow-band images, and each is assigned a color as follows: H-alpha (orange), HeII (blue) and [OIII] (cyan). Each image is 15 minutes in duration.