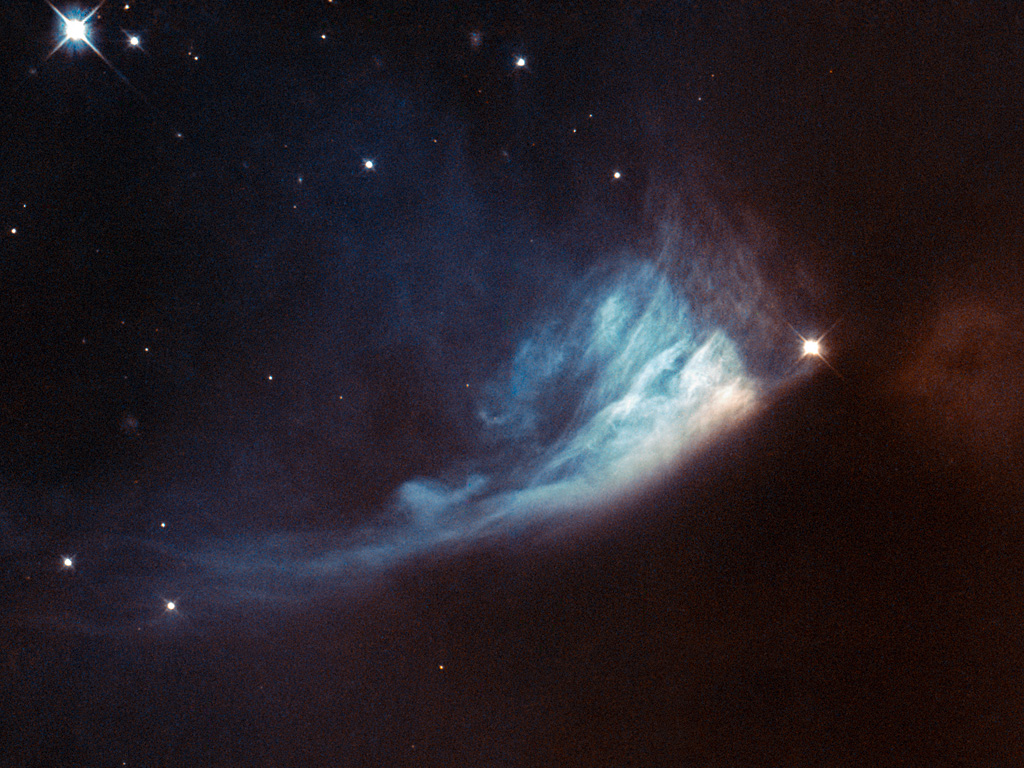 GM 1-29 (also known as Gyulbudaghian’s Nebula, after Armen Gyulbudaghian, an Armenian astronomer who discovered this nebula in 1977) is a bluish fan-shaped, variable reflection nebula of about 0.2 light-year across, located over 1600 light-years from Earth in the northern constellation of Cepheus (the king of Aethiopia in Greek mythology).

The nebula is illuminated by a young star called V* PV Cephei, or PV Cep, the bright spot at the edge of GM 1-29. It is a favorite target for amateur astronomers because the fan-shaped nebulosity changes over a timescale of months. The brightness of the star has also varied over time.

Images of PV Cep taken in 1952 showed a nebulous streak, similar to a comet’s tail. However, these had vanished when new images of the star were obtained some twenty-five years later. Instead, the blue fan-shaped nebula had appeared. Twenty-five years is a very short period on cosmic timescales, so astronomers think that the mysterious streak may have been a temporary phenomenon, such as the remnants of a massive stellar flare — similar to the solar flares we are used to seeing in the Solar System.

At the same time as this was happening, the star itself was brightening. This provided the light to illuminate the newly formed fan-shaped nebula. This brightening might be related to the start of the hydrogen-burning phase of the star, which would mean that it was reaching maturity.

PV Cep is thought to be surrounded by a disk of gas and dust, which would stop light from escaping in all directions. The fan-like appearance is therefore probably a result of starlight escaping from the dust disk and projecting onto the nebula.

This image is taken with the Wide Field Planetary Camera 2 onboard the Hubble Space Telescope using two different color filters. A version of this image was entered into the Hubble’s Hidden Treasures competition by contestant Alexey Romashin.