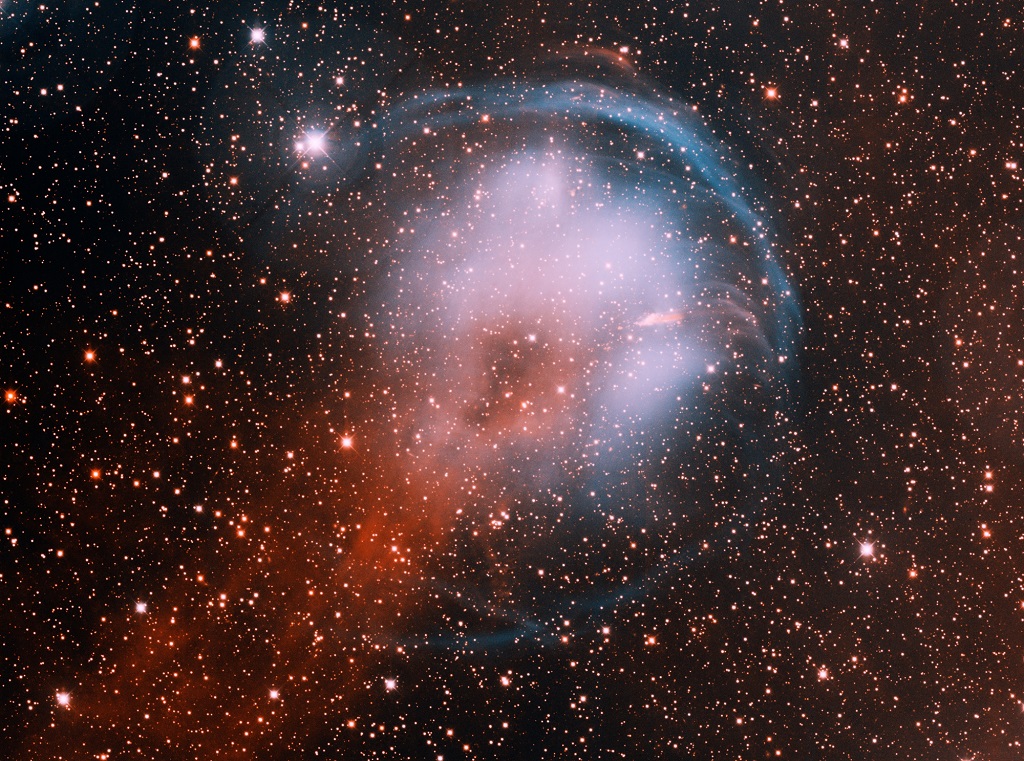 HFG1 (also known as PK 136+05) is a faint, very old planetary nebula of a light-year or more across, located in the northern constellation of Cassiopeia (the Seated Queen). It was discovered in 1982 by Heckathorn, Fesen and Gull, hence its name.

Planetary nebulae represent the final brief stage in the life of a medium-sized star like our Sun. While consuming the last of the fuel in its core, the dying star (collapsing from a red giant to a white dwarf) expels a large portion of its outer envelope. This material then becomes heated by the radiation from the stellar remnant and radiates, producing glowing clouds of gas that can show complex structures, as the ejection of mass from the star is uneven in both time and direction.

HFG1 was produced by the 14.5 magnitude central star V664 Cas. This is not a single star but a close binary star system of a white dwarf and a Sun-like star, which are only a few million kilometers apart and are orbiting each other every 14 hours. This binary system is moving rapidly through our Milky Way galaxy (and towards the upper-right of the image).

As HFG1 plows through the interstellar medium, a bluish bowshock is produced. A long, red trail of about 10,000 year old gas is left behind by V664 Cas at anywhere between 29 and 59 kilometers per second, depending on its distance from the Sun.

In this image we can clearly see HFG1’s interesting structure. It is defined as a type F planetary nebula meaning that is appears to be uniformly filled. The narrow, bluish bowshock is surrounding a central region with an intervening gap. The bowshock is brightest in the south, suggesting that it interacts with the interstellar medium. The bowshock is not complete, invisible at northwest. The core has three bright lobes toward the south and a central opening.

Planetary nebulae last for only about 10,000 years, a very short period in the 10-billion-year lifespan of Sun-like stars. So, HFG1 is already very old, and will gradually disperse into space, while the white dwarf will cool and fade away for billions of years. Our own Sun is expected to undergo a similar fate, but this will not occur until some 5 billion years from now, fortunately.

This image was obtained with the wide-field view of the Mosaic camera on the Mayall 4-meter telescope at Kitt Peak National Observatory. It was generated with observations in the Hydrogen alpha (red) and Oxygen [OIII] (blue) filters. In this image, North is down and East is to the right.