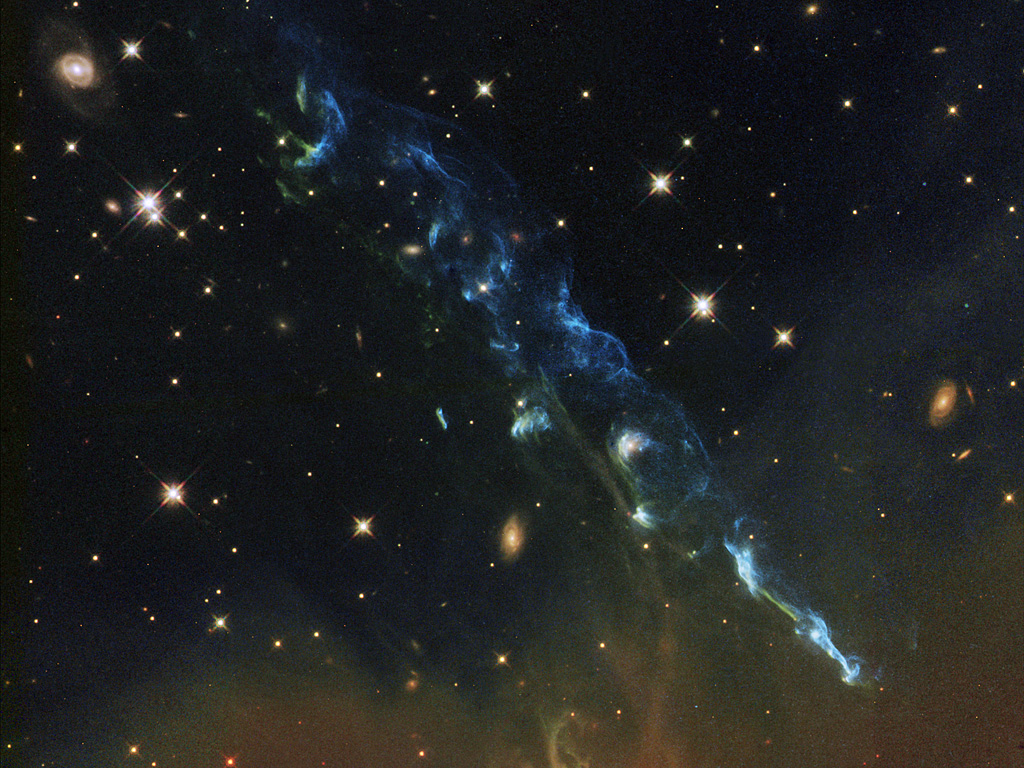 HH 110 (Herbig-Haro object 110) is a narrow jet of gas and matter of about 0.5 light-year long that lies about 1,500 light-years away from Earth in the constellation of Orion (the Hunter).

A star forms from a collapsing cloud of cold hydrogen gas. As the star grows, it gravitationally attracts more matter, creating a large spinning disk of gas and dust around it. The disk material gradually spirals onto the star and escapes as narrow, high-speed jets of heated gas, ejected in opposite directions away from the forming star.

These narrow jets of gas and matter, ejected by newly born stars at speeds of several hundred kilometers per second are called Herbig–Haro (HH) objects – named after astronomers George Herbig and Guillermo Haro who studied the outflows in the 1950s. The jets collide with nearby gas and dust in the interstellar medium, producing bright shock fronts that glow as the gas is heated by this friction.

The jet phase stops when the disk runs out of material. After at most a few tens to a few hundreds of thousands of years after the star’s birth, the jets disperse in the interstellar medium under the action the wind produced by the newly formed star. The jets can evolve visibly over quite short timescales as they move rapidly away from their parent star into the gas clouds in interstellar space.

HH 110 appears different from most other Herbig-Haro objects: it appears a single jet instead of a pair, and, so far astronomers have failed to find the source star driving HH 110. There may be good reason for this: perhaps the HH 110 outflow itself is a continuation of another object called HH 270 (Herbig-Haro object 270). The nearby HH 270 jet is believed to graze a denser, colder cloud and divert at an angle, going dark briefly before reemerging as HH 110.

The image shows that as fast-moving blobs of gas catch up and collide with slower blobs, new shocks arise along the jet’s interior. The light emitted from excited gas in these hot blue ridges marks the boundaries of these interior collisions. By measuring the current velocity and positions of different blobs and hot ridges along the chain within the jet, astronomers can effectively “rewind” the outflow, extrapolating the blobs back to the moment when they were emitted.

Although the plumes of gas look like hot smoke, they are actually billions of times less dense than the smoke emitted from fireworks. This image shows the integrated light from plumes, which are light-years across.

This image is a composite of optical and infrared data taken with Hubble’s Advanced Camera for Surveys in 2004 and 2005 and the Wide Field Camera 3 in April 2011.