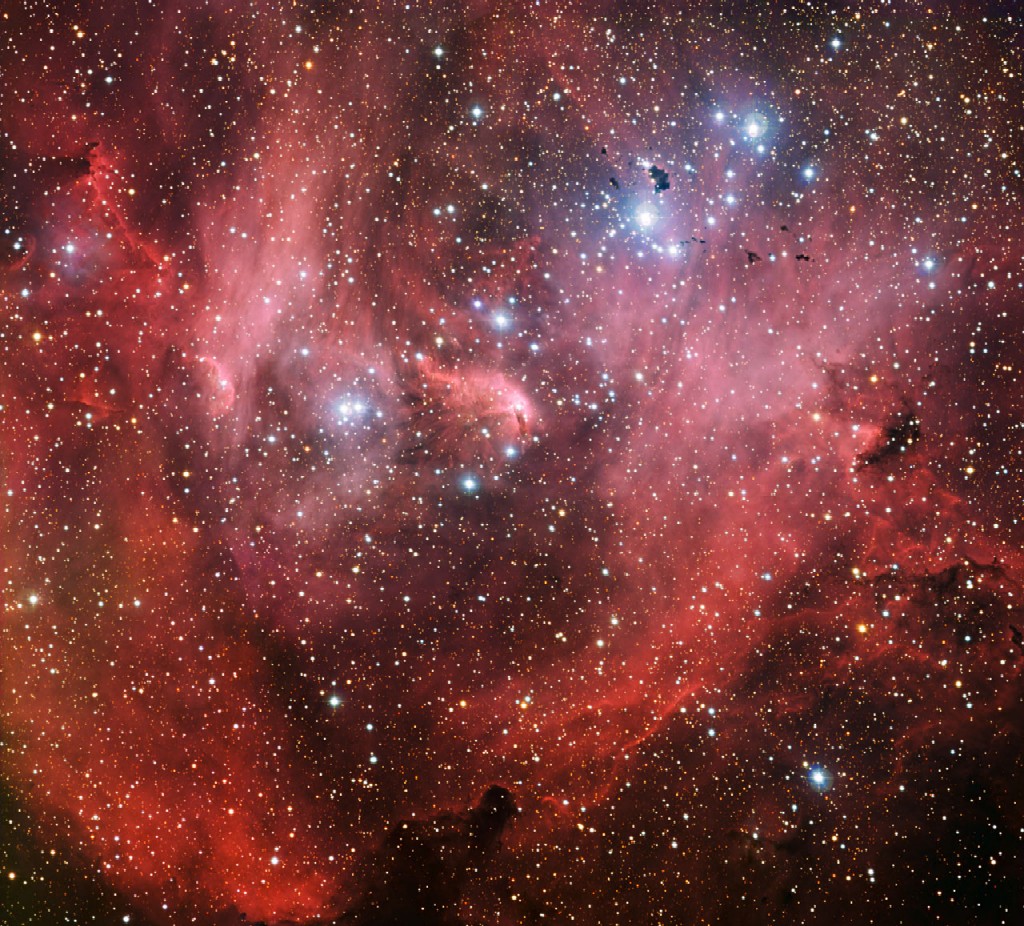 IC 2944/2948 (also known as the Running Chicken Nebula and the Lambda Centauri Nebula) is an emission nebula and home to the new open star cluster Collinder 249, born from the cloud 7.9 million years ago. It is 70 – 77 light years across and located around 5,800 – 6,500 light-years away in the constellation of Centaurus, and appears to surround the bright star Lambda Centauri. But, in fact, Lambda Centauri is much closer to Earth than the Running Chicken Nebula and has nothing to do with the nebula at all. The strange nickname comes from the bird-like shape of its brightest region.

Within this nebula are hot newborn stars that formed from clouds of hydrogen gas which shine brightly with ultraviolet light. The hottest members of the cluster produce enough ultraviolet radiation and strong winds to both ionize and excavate the cloud and making the nebula glow red, typical of star-forming regions.

Aside from the glowing gas, another sign of star formation in the Running Chicken is the series of opaque black clumps silhouetted against the red background in part of this image. These are so called Bok globules, which are usually active star formation regions. They appear dark as they absorb the light from the luminous background. Observations of these dark Bok globules using infrared telescopes, which are able to see through the dust that normally blocks visible light, have indeed revealed that stars are forming within many of them.

The most prominent collection of Bok globules in this image is known as Thackeray’s Globules, after the South African astronomer who discovered them in the 1950s. These are visible among a group of bright stars in the upper right part of the image.

If the stars cocooned in Thackeray’s Globules are still gestating, then the stars of cluster Collinder 249 are their older siblings. Still young in stellar terms, at just a few million years old, these stars shine brightly, and their ultraviolet radiation provides much of the energy that lights up the nebula. These glowing nebulae are relatively short-lived in astronomical terms (typically a few million years), meaning that the Running Chicken Nebula will eventually fade away as it loses both its gas and its supply of ultraviolet radiation.

This image was taken with the Wide Field Imager on the MPG/ESO 2.2-metre telescope.
Image Credit: ESO