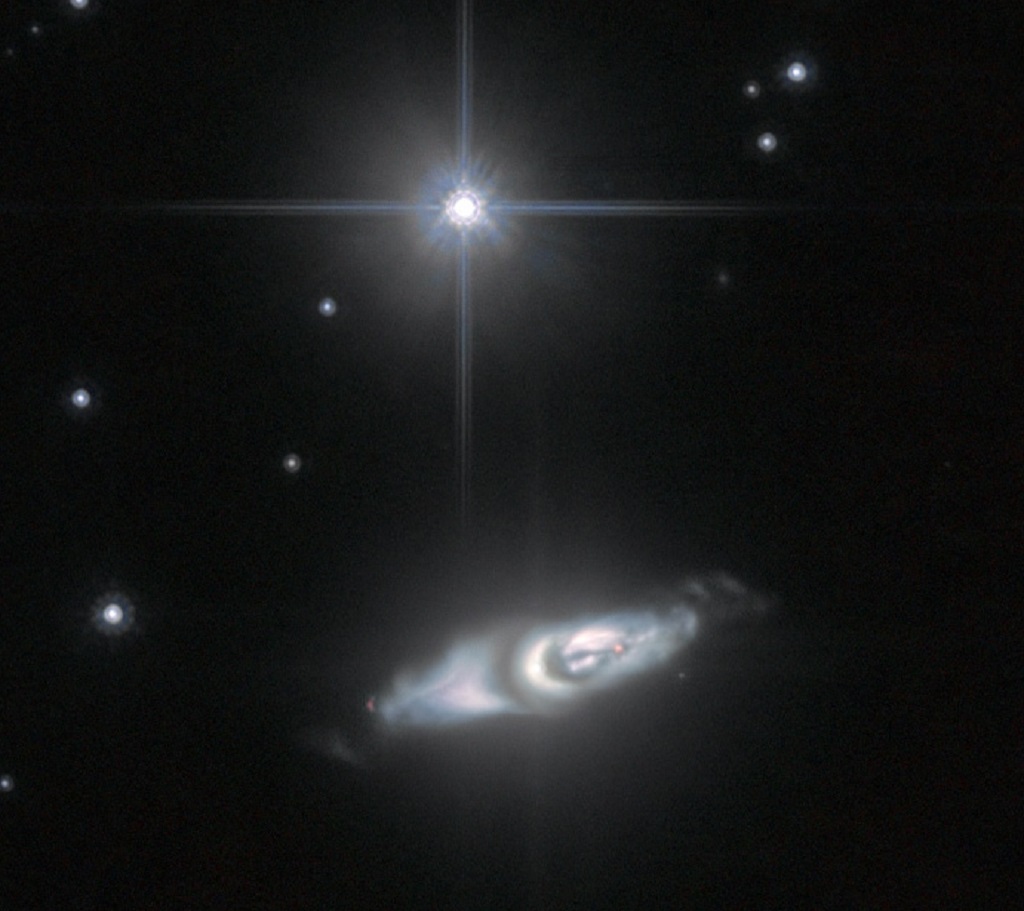 IRAS 22036+5306 is a dusty, bipolar protoplanetary (or preplanetary) nebula located about 6,500 light-years away from Earth in the northern constellation of Cepheus (named after the King of Aethiopia in Greek mythology).

Despite their name, protoplanetary nebulae have nothing to do with planets: they are clouds of dust and gas formed from material shed by an aging central star with a mass up to eight times that of the Sun. After billions of years, the hydrogen fuel that powers the star begins to run out. The star balloons to great size and becomes a red giant. Eventually, however, the star collapses back on itself. This increases the temperature at its core and most of the stars material is catapulted into space, enveloping itself in expanding clouds of gas and dust, but the core is not yet hot enough to make the gas itself glow on its own. Instead, the gas is merely reflecting the light from the star.

But as the star continues to evolve, it becomes hot enough to emit strong ultraviolet light. At that point it will have the power needed to make the gas glow, and will become a real full-fledged planetary nebula. But before the nebula begins to shine, fierce winds of material ejected from the star will continue to shape the surrounding gas into intricate patterns. Then the star cools down and all that is left after this process is the exposed, hot and dead core, known as a white dwarf.

A protoplanetary nebula is a relatively short-lived phenomenon, what means there are relatively few of them in existence at any one time. Moreover, they are very dim, requiring powerful telescopes to be seen. This combination of rarity and faintness means they only a few hundred such nebulae have been spotted in our Milky Way galaxy which were only discovered comparatively recently.

Close to a bright, nearby star in this image, IRAS 22036+5306 has been captured during this brief tumultuous period late in a star’s life. It is making the transition through the protoplanetary nebula phase. Inside the nebula lies the aged star – reckoned to have been at least four times the mass of the Sun – that has thrown off almost all of its outer material. Hidden under this veil, the dense, still-burning, exposed core of the star grows hotter and will become a hot white dwarf.

Encircling the star is a torus consisting partly of castoff material, as well as possibly the grainy remnants of comets and other small, rocky bodies. Twin jets spout from the star’s poles and pierce this dusty waist. The jets contain gobbets of material — typically about ten thousand times the mass of the Earth — hurling outwards at a speed of nearly 800,000 kilometers per hour.

For now, light from the central star is merely being reflected off its expelled gaseous shell. Soon, however, the star will become a very hot, white dwarf, and its intense ultraviolet radiation will ionize the blown-off gas, making it glow. IRAS 22036+5306 will have then become a fully-fledged planetary nebula, while the star starts its very slow final cool-down.

The image was obtained with the High Resolution Channel of Hubble’s Advanced Camera for Surveys. The picture has been made from images through a yellow/orange filter (coloured blue), a near-infrared filter (coloured orange) and a filter that lets through the red glow of hydrogen (coloured red).