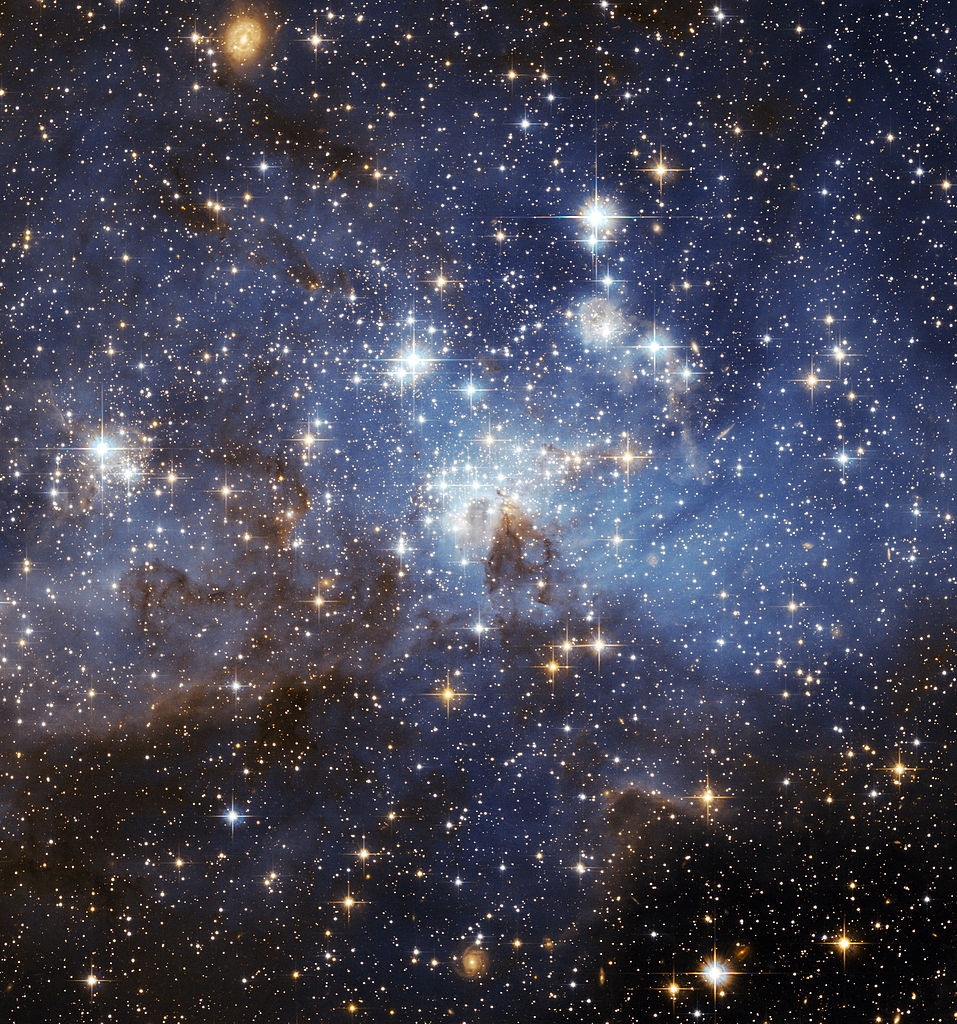 LH 95 is a stellar nursery of about 150 light-years across, located within the Large Magellanic Cloud, some 160,000 light-years away in the southern constellation of Dorado, the Swordfish.

LH 95 is just one of the hundreds of star-forming systems, called associations, located in the Large Magellanic Cloud. This small satellite galaxy of the Milky Way has relatively small amounts of elements heavier than hydrogen, what gives astronomers an insight into star formation in environments different than our Milky Way.

Once massive stars – those with at least 3 times the mass of the Sun – have formed, they generate strong stellar winds and high levels of ultraviolet radiation that ionize the surrounding interstellar gas. The result is a nebula of glowing hydrogen that will expand out into the molecular cloud that originally collapsed to form these stars. The blue haze seen throughout the image around LH 95 is actually part of this bright nebula, known as DEM L 252.

Some dense parts of this star-forming region have not been completely eroded by the stellar winds and can still be seen as dark dusty filaments in the picture. Such dust lanes absorb parts of the blue light from the stars behind them, making them appear redder.

Other parts of the molecular cloud have already contracted to turn into glowing groups of infant stars, the fainter of which have a high tendency to cluster. There are at least two small compact clusters associated with such groups, one to the right, above the centre of the picture and one to the far left. These stellar nurseries host hundreds of infant low-mass stars. Such stars have also been found in the main part of LH 95 amongst its massive bright stellar members.

Usually only the brightest, bluest, most massive stars in a star-forming region are visible, but this image was taken in such high resolution and in such specific colors that many recently formed stars that are more yellow, more dim, and less massive are also discernable. A total of more than 2,500 pre–main sequence stars with masses down to about 0.3 solar masses have been counted in LH 95, thereby giving a detailed picture of what a typical stellar association in the Large Magellanic Cloud looks like.

This image was taken with the Advanced Camera for Surveys onboard the Hubble Space Telescope. It is a composite of two filters that localize visible and infrared light. Because of the color assignments chosen, ionized hydrogen, which is visible within the visible light filter, appears bluish. The choice of color assignment helps to distinguish hot bright blue stars from cooler, less luminous red stars.