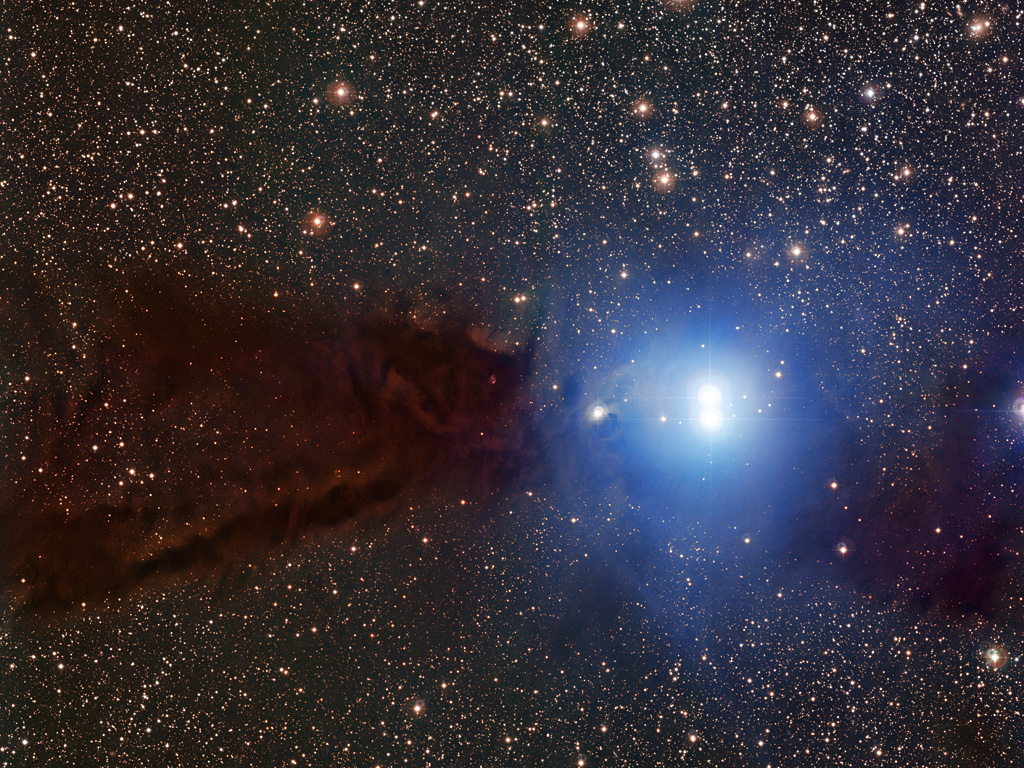 Lupus 3 is a dark, star-forming cloud with an associated cluster of brilliant stars, located about 600 light-years from Earth within our Milky Way Galaxy in the southern constellation of Scorpius (the Scorpion). The section shown here is about five light-years across.

On the left of this image there is a dark column resembling a cloud of smoke. To the right shines the small cluster of brilliant hot young stars. (We likely wouldn’t be able to see such a dark absorption nebula unless it was silhouetted against the much brighter region of space produced by the star cluster, since absorption nebulas do not create their own light.)

At first glance these two features could not be more different, but they are in fact closely linked. The dark cloud contains huge amounts of cool cosmic dust and gasses, and is in fact a nursery where new stars are being born. The cluster contains stars that have already emerged from their dusty stellar nursery.

As the denser regions of the cloud contract under their own gravity and heat up, they blaze up into newborn stars whose light is initially blocked by the surrounding gas. But as stars grow hotter over time, their stellar winds sweep away the obstructing gas so that they emerge as bright beacons similar to those in the star cluster near Lupus 3.

Two of the brightest stars in the cluster can be seen easily with a small telescope, and are likely less than 1 million years old. It is likely that the Sun formed in a similar star formation region more than four billion years ago.

This image was taken with the MPG/ESO 2.2-meter telescope at the La Silla Observatory in Chile and is the best image ever taken of this object.