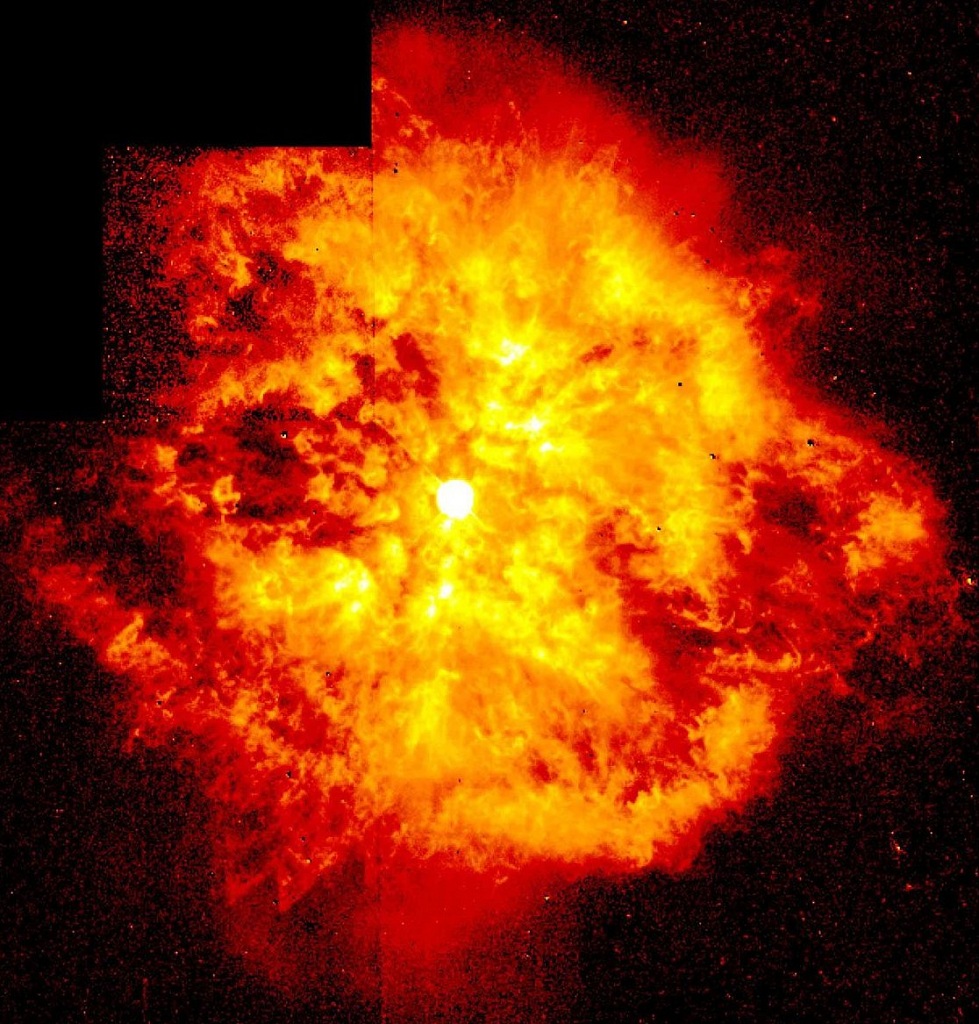 M1-67 is the youngest wind-nebula around a Wolf-Rayet star (WR 124) in our Galaxy, located some 10,000-15,000 light-years away in the constellation Sagittarius. The stellar wind is responsible for the formation of the intensely hot ring nebula (currently 2.98 light-years across). In fact, M1-67 originates from several outbursts that occurred inside the bow shock around WR 124. The nebula is expanding at a rate of over 150,000 kilometers per hour, and is currently 2.98 light-years across, not large enough to have come into contact with the interstellar medium. M1-67 is estimated to be no older than 10,000 years.

Wolf-Rayet (WR) stars are extremely rare and short-lived super-hot stars (in this case 50,000 degrees Kelvin) which start their lives with dozens of times the mass of our Sun, but rapidly loose most of it through a powerful stellar wind, with speeds up to 2000 km/s (1240 mi/s). They are also highly luminous, from tens of thousands to several million times the luminosity of the Sun, although not exceptionally bright visually since most of their output is in far ultraviolet and even soft X-rays. WR stars are candidates for being progenitors of long-duration Gamma Ray Bursts. Often occurring in binary systems, they are doomed, within a few million years, to explode as supernovae.

WR 124 has an estimated mass of 20 solar masses. In the past, the star could have been much larger, but a large portion of its mass has blown away through the intense stellar winds of the Wolf-Rayet phase. It may lose about three-quarters of its initial mass during its Wolf-Rayet phase. WR 124 is one of the hottest Wolf-Rayet stars known.

The fierce stellar wind coming from WR 124 does not flow smoothly into space but has instabilities which make it clumpy. Hot clumps of gas are being ejected into space at speeds of over 160,000 kilometers per hour (100,000 miles per hour).

Observations of M1-67 reveal a wealth of small knots and substructures inside the nebula. Astronomers study how these structures have evolved and what they can teach us about stellar winds, their chemistry, and how they mix with the surrounding interstellar medium, before the star will eventually blow everything away in a fiery supernova explosion.

Remarkable in M1-67 are vast arcs of glowing gas around the star, which are resolved into filamentary, chaotic substructures, yet with no overall global shell structure. The clumps in the stellar wind are 160 billion kilometers (100 billion miles) wide glowing gas blobs. Each blob is about 30 times the mass of the Earth. As the blobs cool they will eventually dissipate into space.