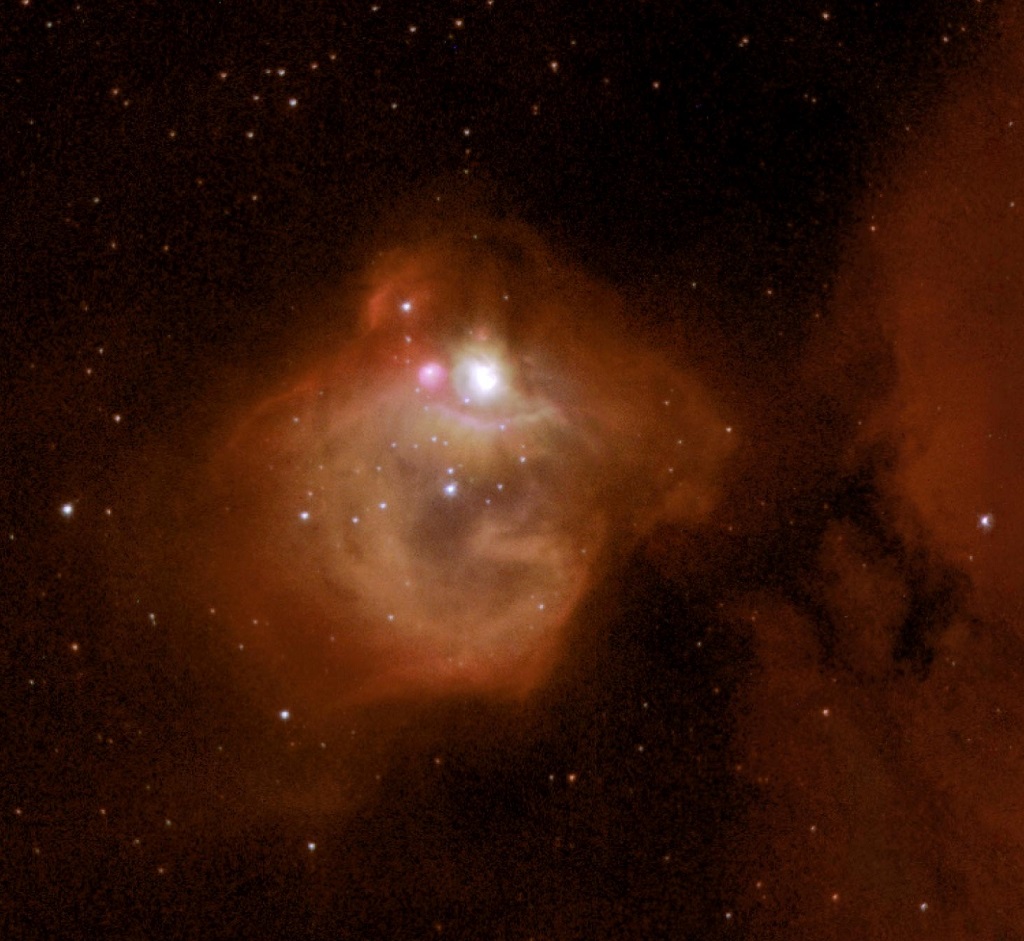 NGC 1748 (also known as IC 2114 and N83B) is an emission nebula of roughly 55 light-years across in the Large Magellanic Cloud (LMC), a satellite galaxy of our Milky Way galaxy, located some 163,000 light-years away from us in the southern constellation of Dorado (the Swordfish).

Astronomers from France, the U.S., and Germany have used the Hubble Space Telescope to study the interplay between gas, dust, and radiation from the newly born stars in this nebula. This study has also uncovered several individual stars that are responsible for lighting up this cloud of gas.

The star at the very center of the nebula, just below the brightest region, is actually about 30 times more massive and almost 200,000 times brighter than our Sun. The extremely intense radiation and powerful stellar “winds” from this ultra-bright star and from newly born, ultra-bright neighbour stars have cleared away the surrounding gas to form a large cavity. The bubble is approximately 25 light-years in diameter. It’s estimated that the spherical void in NGC 1748 must have been carved out of the nebula very recently – in astronomical terms – maybe as little as 30,000 years ago.

The hottest star in NGC 1748 is 45 times more massive than the Sun and is embedded in the brightest region in the nebula. This bright region, situated just above the center, is only about 2 light-years across. The region’s small size and its intense glow are tell-tale signs of a very young, massive star. This star is the youngest newcomer to this part of the LMC. The image shows a bright arc structure just below the luminous star. This impressive ridge may have been created in the glowing gas by the hot star’s powerful wind.

Measurements of the age of this star and neighboring stars in the nebula show that they are younger than the nebula’s central star. Their formation may have been “triggered” by the violent wind from the central star. This “chain-reaction” of stellar births seems to be common in the Universe. About 20 young and luminous stars have been identified in the region, but it may well be that many more massive stars remain undetected in other areas of the Large Magellanic Cloud, hidden by dust in small clusters.

The image also illustrates just how massive stars in NGC 1748 sculpt their environment by generating powerful winds that alter the shape of the parent gaseous nebula. Although most of the stars in the Universe were born several billions of years ago, when the Universe was young, star formation still continues today. This Hubble image shows a very compact star-forming region in a small part of the LMC.

Young, massive, ultra-bright stars are seen here just as they are born and emerge from the shelter of their pre-natal molecular cloud. Catching these hefty stars at their birthplace is not as easy as it may seem. Their high mass means that the young stars evolve very rapidly and are hard to find at this critical stage. Furthermore, they spend a good fraction of their youth hidden from view, shrouded by large quantities of dust in a molecular cloud. The only chance is to observe them just as they start to emerge from their cocoon – and then only with very high-resolution telescopes.

To the right of the glowing NGC 1748 is a much larger diffuse nebula, known as DEM22d, which is partly obscured by an extended lane of dust and gas.

This image is composed of three narrow-band-filter images obtained with the Wide Field Planetary Camera 2 aboard the Hubble Space Telescope in May 2000. The colors are red (ionized hydrogen, H-alpha), green (ionized oxygen), and blue (ionized hydrogen, H-beta). The blue corresponds to the warmest regions, the red to the coldest.