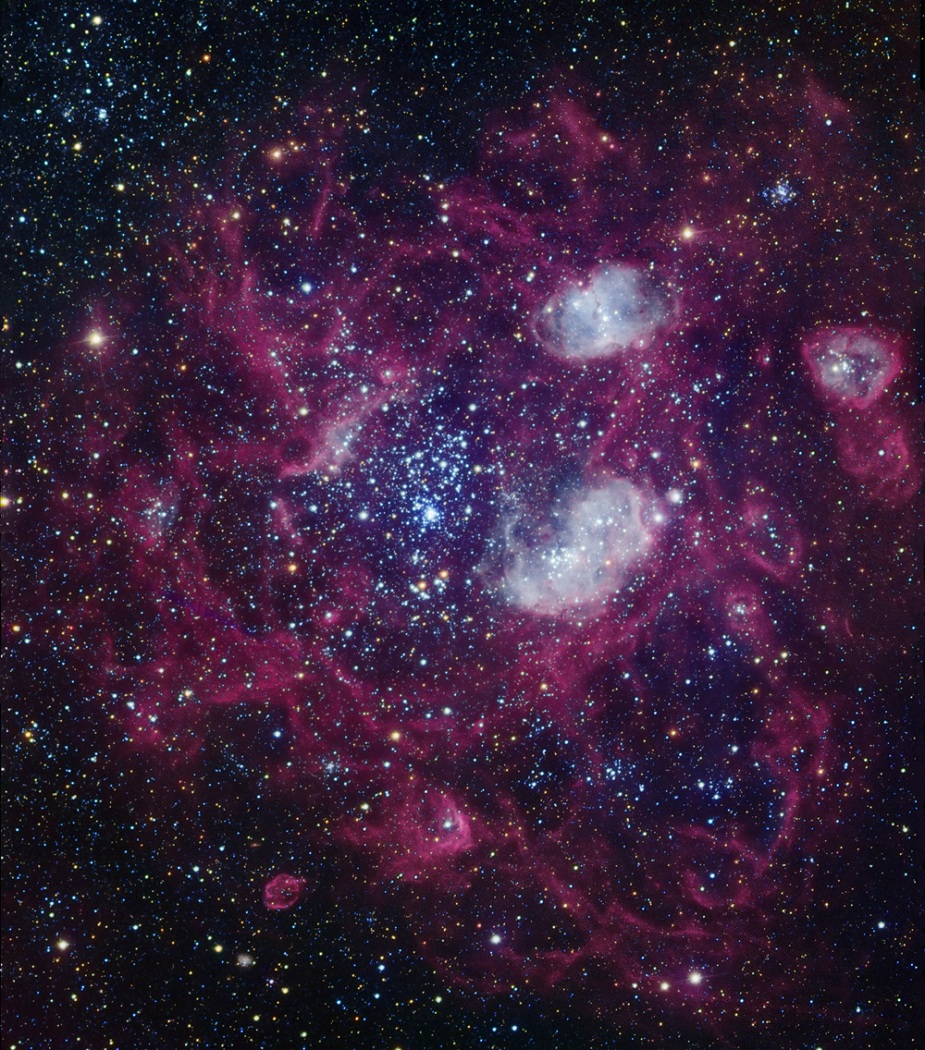 NGC 1760 (also designated LHA 120-N 11, informally N11) is an emission nebula, or actually a complex ring of emission nebulae connected by glowing filaments over 1000 light-years across and located about 160,000 light-years away within the Large Magellanic Cloud, in the constellation of Dorado. It is one of the most active star formation regions in the nearby Universe.

It is one of the largest and most spectacular star-forming regions within the Large Magellanic Cloud (LMC), the largest satellite galaxy of our Milky Way. In fact, it is the second largest, only surpassed in the size and activity by the Tarantula nebula (or 30 Doradus), located at the opposite side of the LMC. The dramatic and colorful features visible in the nebula are the telltale signs of star formation.

A leading hypothesis for the formation of NGC 1760 is that several successive generations of stars, each of which formed further away from the center of the nebula than the last, have created shells of gas and dust. These shells were blown away from the newborn stars in the turmoil of their energetic birth and early life, creating the ring- and bean-like shapes so prominent in this image.

In NGC 1760 altogether, three generations of stars can be found. ‘Grandmother’ stars that have carved a large superbubble, leading to the birth of the cluster of massive bright blue-white ‘mother’ stars (NGC 1761) in the center. These in turn gives birth to new star ‘babies’ inside the dark globules.

NGC 1761 (also designated LH9) is composed of about 50 massive hot young stars that emit intense ultraviolet radiation that has eroded a large hole in their surroundings. These stars are among the most massive stars known anywhere in the Universe. The bright region just above center is N11B, another explosive domain where stars are being formed even today.

Although the Large Magellanic Cloud is much smaller than our own Milky Way, it is an active star-forming galaxy. Studying these stellar nurseries helps astronomers understand a lot more about how stars are born and their ultimate development and lifespan.