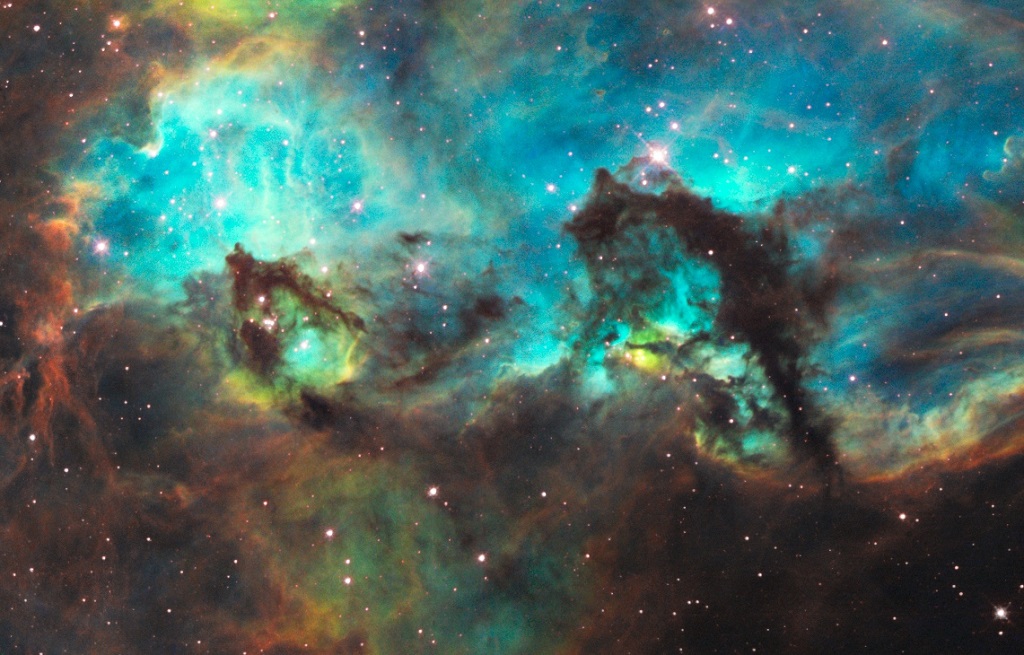 NGC 2074 is a large emission nebula with an embedded open star cluster (with the same designation, and which lies just off the top of the image) in the Large Magellanic Cloud – a small satellite of our Milky Way galaxy, located about 163,000 light-years away in the southern constellation of Dorado (the Swordfish).

The image shows only a small portion (of approximately 100 light-years wide) of this energetic emission nebula that lies very close to the Tarantula nebula (30 Doradus), one of the most active star-forming regions in our Local Group of galaxies.

In this fantasy-like landscape, dark towers of dust rise above a glowing wall of gases of the molecular cloud at the bottom, including “the Seahorse’. This seahorse-shaped dark dust structure toward the lower right of this image is a pillar of smoky dust of about 20 light-years long.

The three-dimensional-looking image reveals dramatic ridges, valleys and pillars of dust, as well as gaseous filaments, which are glowing fiercely under torrential ultraviolet radiation. The region is on the edge of a dark molecular cloud (at the bottom) that is an incubator for the birth of new stars. And indeed, the emission nebula is actively creating new stars – like those in NGC 2074 – perhaps triggered by a nearby supernova explosion.

The high-energy radiation blazing out from hot young stars in NGC 2074 is sculpting the wall of the nebula and will slowly erode the dust pillars away over the next million years. Another young cluster may be hidden beneath a circle of brilliant blue gas at center (near the Seahorse’s head).

The Large Magellanic Cloud is a fascinating laboratory for observing star-formation regions and their evolution. Dwarf galaxies like the Magellanic Clouds are considered to be the primitive building blocks of larger galaxies.

This color image was taken on August 10, 2008, with the Wide Field Planetary Camera 2 onboard the Hubble Space Telescope in honor of Hubble’s 100,000th trip around the Earth. Red shows emission from sulfur atoms, green from glowing hydrogen, and blue from glowing oxygen.