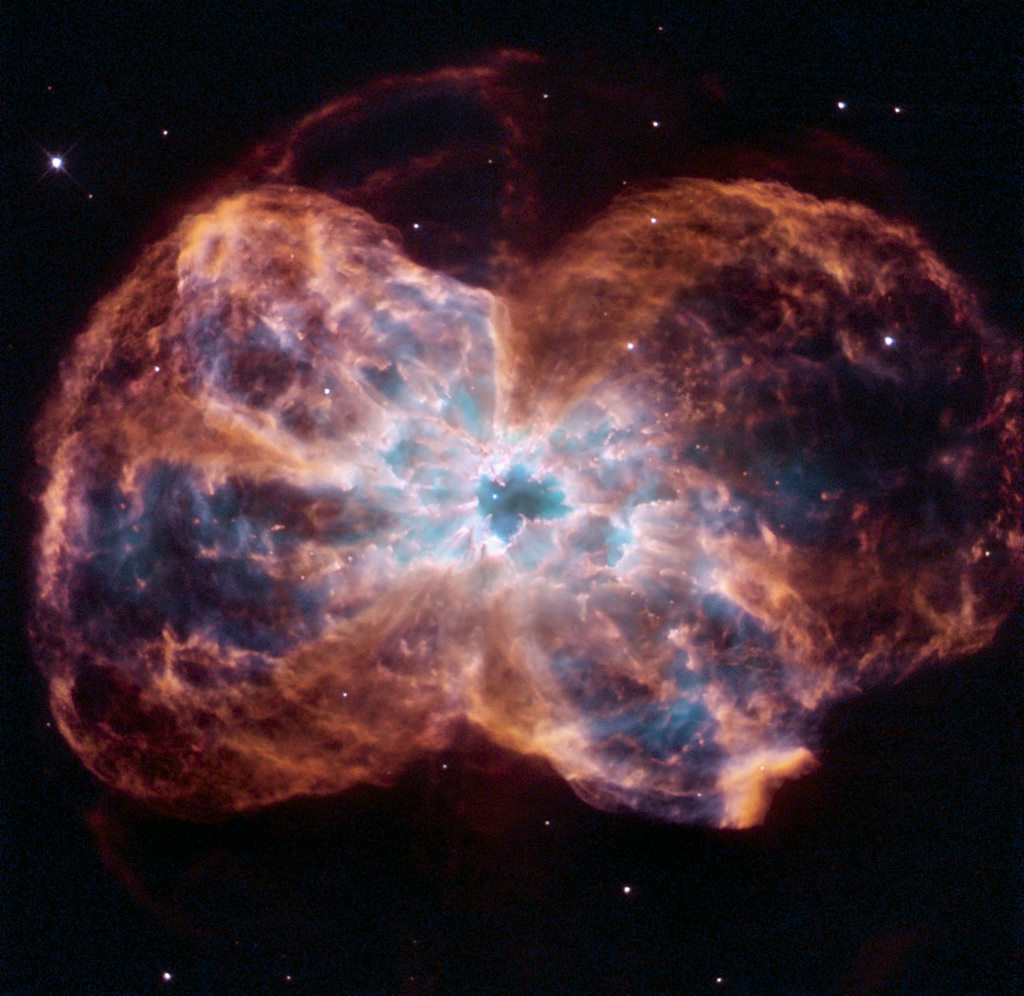 NGC 2440 is a planetary nebula of about 1½ light-years across, located some 4,000 light-years away in the constellation of Puppis. It is moving away from us at approximately 62.7 kilometers per second.

When a star with a mass up to eight times that of the Sun runs out of fuel at the end of its life, it blows off its outer shells and begins to lose mass. This allows the hot, inner core of the star (collapsing from a red giant to a white dwarf) to radiate strongly, causing this outward-moving cocoon of gas to glow brightly as a planetary nebula.

Over the next several thousand years, the nebula will gradually disperse into space, and then the star will cool and fade away for billions of years as a white dwarf. Our own Sun is expected to undergo a similar fate, but fortunately this will not occur until some 5 billion years from now.

NGC 2440’s complex structure, with a bright inner region and a much fainter outer region with a far greater extent, indicates that its central star shed its mass episodically. During each outburst, the star expelled material in a different direction. This can be seen in the two bow tie-shaped lobes. The nebula also is rich in clouds of dust, some of which form long, dark, dense ridges of material pointing away from the star.

The nebula is energized by ultraviolet light from its central star (the white dot in the center). This star, HD62166 is, with a temperature of about 219,000 kelvins and a luminosity 1,100 times that of the Sun, possibly the hottest known white dwarf. This dense star, with an estimated 0.6 solar mass and 0.028 solar radius, has an apparent magnitude of 17.5.

NGC 2440 is enriched in helium, nitrogen, and carbon, which it is donating back to interstellar space.

The image was taken Feb. 6, 2007 with Hubble’s Wide Field Planetary Camera 2. The colors correspond to material expelled by the star. Blue corresponds to helium; blue-green to oxygen; and red to nitrogen and hydrogen.