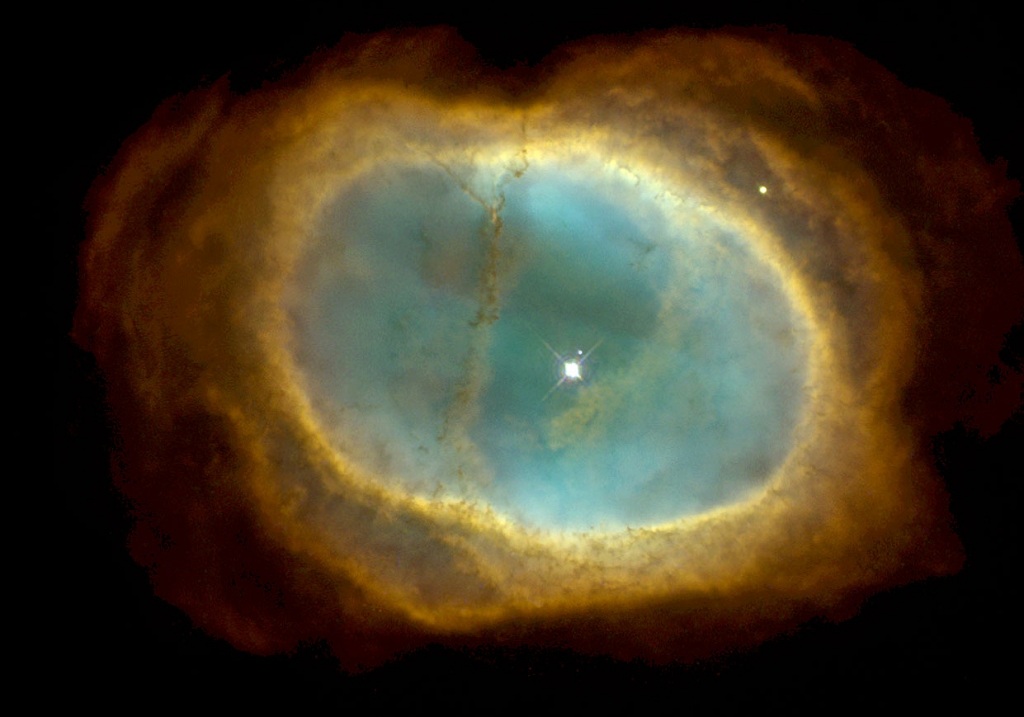 NGC 3132 (also known as the Eight-Burst Nebula because of its figure-8 appearance through small telescopes, or the Southern Ring Nebula) is a very bright, asymmetric planetary nebula of approximately 0.4 light-year across, located about 2,000 light-years away in the southern constellation Vela. It is moving away from us at 49 kilometers per second.

When a star with a mass up to eight times that of the Sun approaches the end of its life, it blows off its outer shells and begins to lose mass. This allows the hot, inner core of the star to radiate strongly, causing this outward-moving cocoon of gas to glow brightly as a planetary nebula.

Over the next several thousand years, the nebula will gradually disperse into space, and then the star will cool and fade away for billions of years as a white dwarf. Our own Sun is expected to undergo a similar fate, but fortunately this will not occur until some 5 billion years from now.

There are two stars close together — a binary system — in the center of NGC 3132, one of 10th magnitude, the other 16th. It’s the dim star, not the bright one, near the center that caused multiple outbursts and originated the intricate, somewhat concentric structure of the nebula. This hot central star is a white dwarf of about 100,000 K that has now blown off its layers and is making the nebula fluoresce brightly from the emission of its intense ultraviolet radiation.

This expanding cloud of gas is one of the nearest known planetary nebulae. The gases are expanding away from the central star at a speed of about 14.4 kilometers per second. Neither the unusual shape of the surrounding cooler shell nor the structure and placements of the cool filamentary dust lanes running across NGC 3132 are well understood.

This image is taken with the Wide Field Planetary Camera 2 onboard the Hubble Space Telescope using three different color filters. North is to the bottom left hand corner of this image.