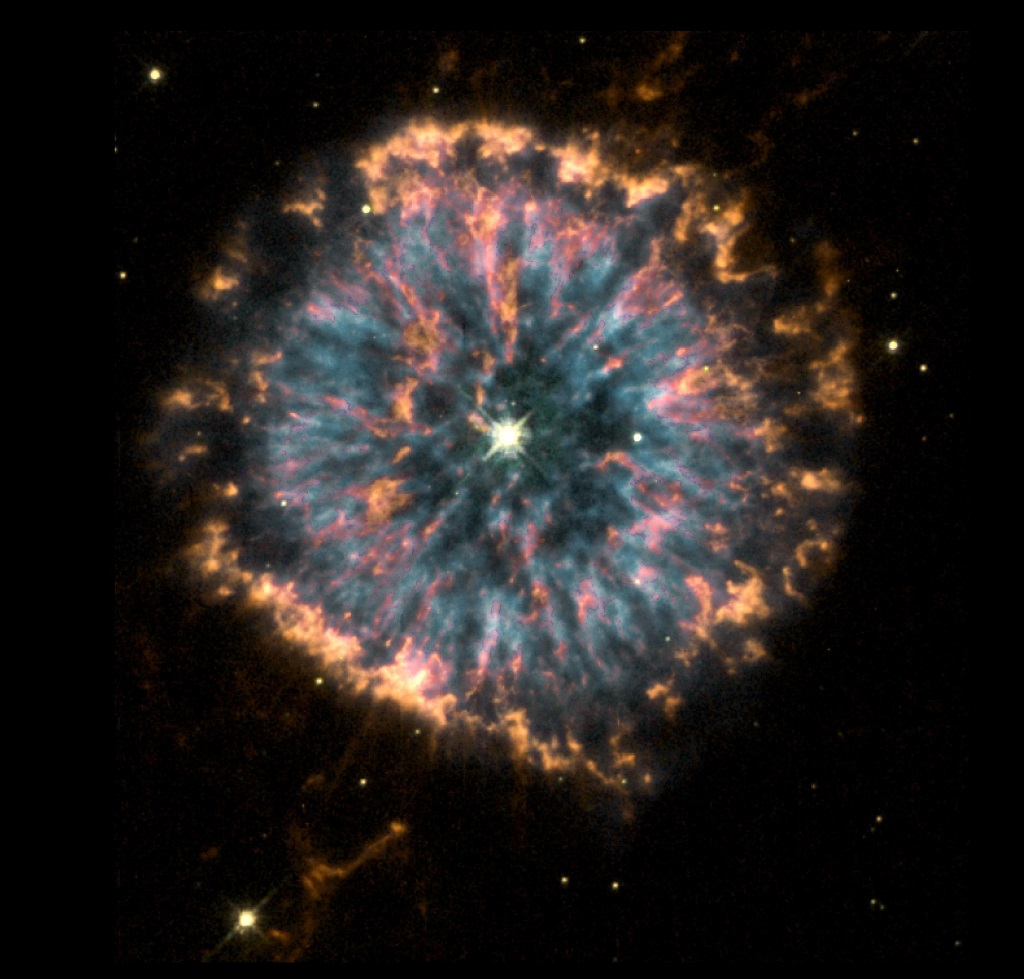 NGC 6751 (nicknamed the “Glowing Eye Nebula”) is a planetary nebula of some 0.8 light-year across (about 600 times the size of our Solar System), located roughly 6,500 light-years away from Earth in the northern constellation of Aquila (the Eagle). It was formed several thousand years ago, and is expanding at a speed of about 40 kilometers (25 miles) per second.

Planetary nebulae have nothing to do with planets. The name arose in the 18th century because of the visual similarity between some round planetary nebulae and the planets Uranus and Neptune when viewed through small optical telescopes. The name has stuck even though modern telescopes make it obvious that these objects are not planets at all.

NGC 6751 shows several remarkable and poorly understood features. Blue regions mark the hottest glowing gas, which forms a roughly circular ring around the central stellar remnant. Orange and red show the locations of cooler gas. The cool gas tends to lie in long streamers pointing away from the central star, and in a surrounding, tattered-looking ring at the outer edge of the nebula.

The origin of these cooler clouds within the nebula is still uncertain, but the streamers are clear evidence that their shapes are affected by radiation and stellar winds from the hot star at the center. The star’s surface temperature is estimated to be a scorching 140,000 degrees Celsius (250,000 degrees Fahrenheit).

Planetary nebulae last for only about 10,000 years, a very short period in the 10-billion-year lifespan of Sun-like stars. So, over the next several thousand years, the nebula will gradually disperse into space, and then the white dwarf will cool and fade away for billions of years. No longer emitting heat or light, the white dwarf will finally become a black dwarf. (However, at less than 14 billion years old, the Universe is still too young to have created any black dwarfs.) Our own Sun is expected to undergo a similar fate, but fortunately this will not occur until some 5 billion years from now.

The Hubble image is obtained in 1998 with the Wide Field Planetary Camera 2 by a team of astronomers led by Arsen Hajian of the U.S. Naval Observatory in Washington, DC. The Hubble Heritage team, working at the Space Telescope Science Institute in Baltimore, has prepared this color rendition by combining the Hajian team’s WFPC2 images taken through three different color filters that isolate nebular gases of different temperatures.