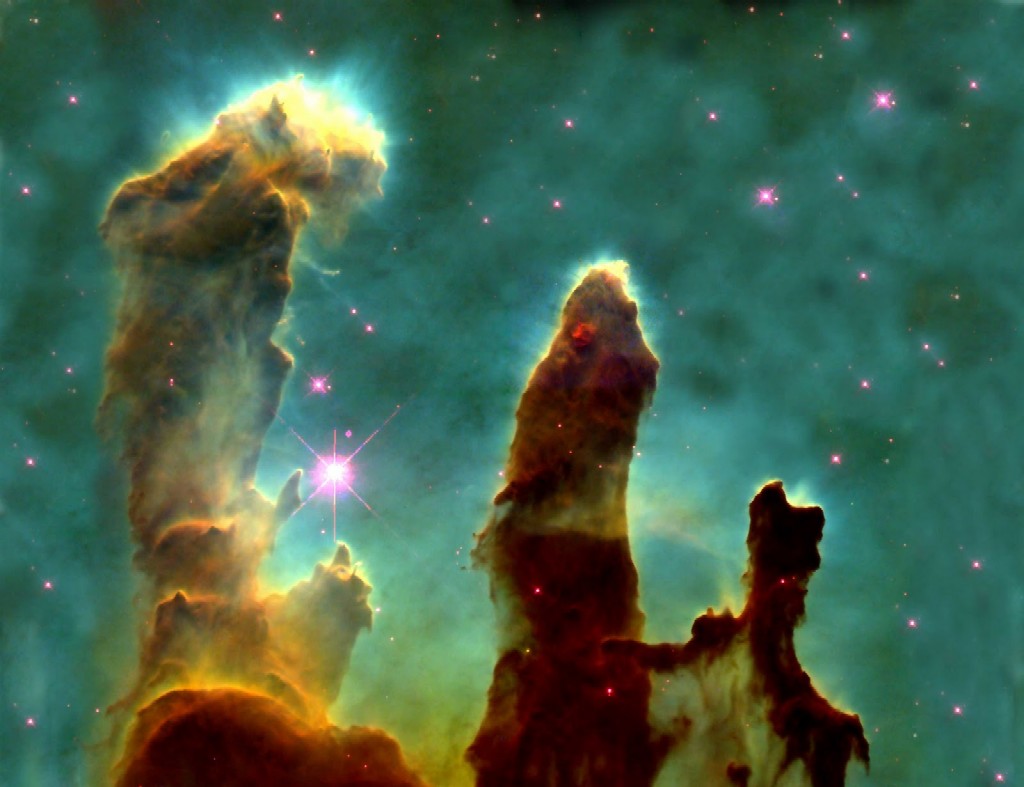 The famous “Pillars of Creation” are so called elephant trunks — massive pillars of dense gas and dust that are also incubators for new stars – located within the Eagle Nebula (Messier 16), about 7,000 light-years away in the constellation Serpens. They are so named because the gas and dust are in the process of forming, or creating, new stars.

The leftmost pillar is about four light-years in length from base to tip. The finger-like protrusions at the top of the clouds are larger than our Solar System.

These dense pillars protrude from the interior wall of a dark molecular cloud like stalagmites from the floor of a cavern. The pillars, which have survived longer than their surroundings, are composed of cool molecular hydrogen and dust that are being eroded by the ultraviolet light of hot, massive newborn stars. This process is called “photoevaporation.” The ultraviolet light is also responsible for illuminating the convoluted surfaces of the columns and the streamers of gas boiling away from their surfaces.

As the pillars are slowly eroded away, small globules of even denser gas buried within the pillars are uncovered. These globules have been dubbed “EGGs.” EGGs is an acronym for “Evaporating Gaseous Globules,” but it is also a word that describes what these objects are. Forming inside at least some of the EGGs are embryonic stars — stars that abruptly stop growing when the EGGs are uncovered and they are separated from the larger reservoir of gas from which they were drawing mass. Eventually, the stars themselves emerge from the EGGs as the EGGs themselves succumb to photoevaporation.

Spitzer Space Telescope took images of the pillars next to a giant cloud of glowing dust scorched by the heat of a supernova. One group of astronomers think the supernova’s shock wave destroyed the pillars about 6,000 years ago. But because the Eagle Nebula is located some 7,000 light years away, this destruction is not yet visible on Earth, but should be visible in the next 1000 years. So, what astronomers see now is evidence of the supernova just before its destructive shock wave reached the pillars.

However, this interpretation of the hot dust has been disputed by an astronomer uninvolved in the Spitzer observations, who argues that a supernova should have resulted in stronger radio and x-ray radiation than has been observed, and that winds from massive stars could instead have heated the dust. If this is the case, the Pillars of Creation will undergo a more gradual erosion.

This image was taken by the Hubble Telescope on April 1, 1995. It is composed of 32 different images from four separate cameras in the Wide Field and Planetary Camera 2 on board Hubble.
The photograph was made with light emitted by different elements in the cloud and appears as a different colour in the composite image: green for hydrogen, red for singly ionized sulfur and blue for double-ionized oxygen atoms.