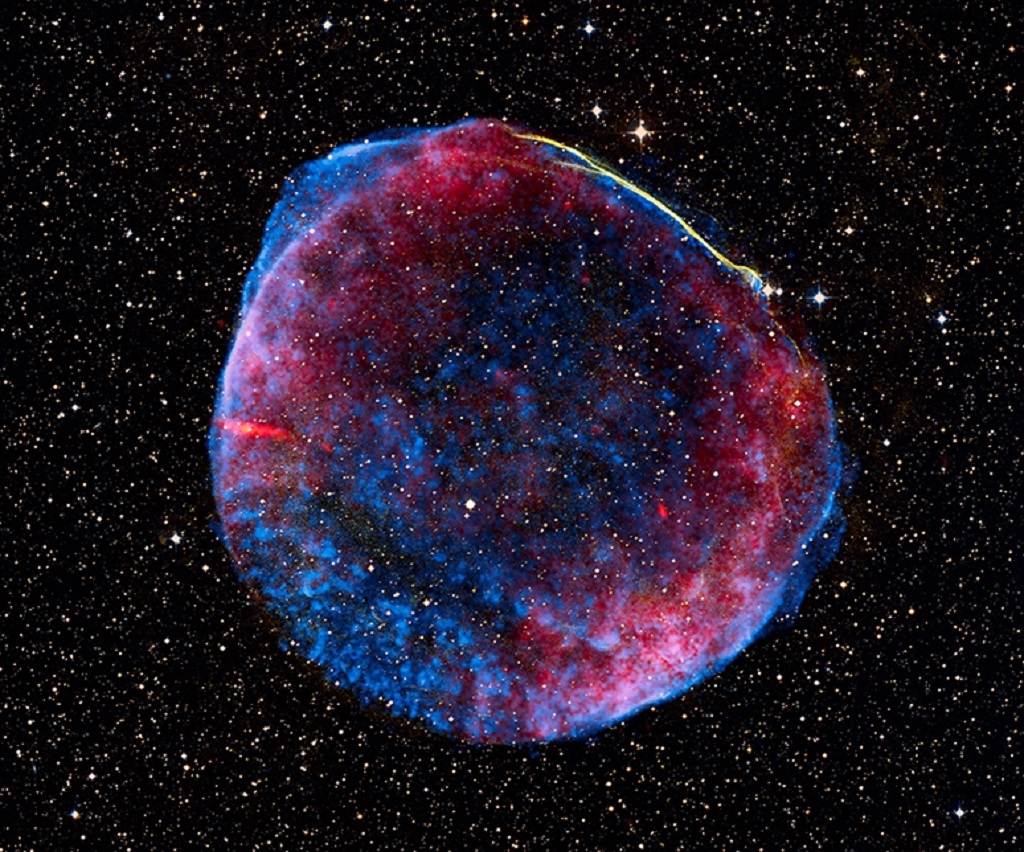 SN 1006 (also known as SNR G.327.6+14.6) is the remnant of a Type Ia supernova that occurred some 7,200 light-years away from Earth in the southern constellation of Lupus (the Wolf). The supernova was widely seen on Earth in the year 1006 A.D. and is currently about 70 light-years across.

A Type Ia supernova is a result from the violent explosion of a white dwarf star (a compact star that has ceased fusion in its core). The white dwarf increases its mass beyond a critical limit (the Chandrasekhar limit) by gobbling up matter from a companion star. A runaway nuclear explosion then makes the star sending its material hurtling into space and suddenly becomes as bright as a whole galaxy, before gradually fading from view, in which the white dwarf is completely destroyed.

SN 1006 was probably the result of the merging of two white dwarf stars, which led to an explosion that was so destructive that the stars disappeared from the Universe. When the stars exploded, they were sending their material hurtling into space, away from the original explosion. The fastest knots of material are moving outward at almost eleven million miles (17.7 million kilometers) per hour, while those in other areas are moving at a more leisurely seven million miles (11 million kilometers) per hour.

This supernova explosion was the brightest stellar event in the recorded history, and visible during daytime for weeks. Because the distance to the supernova remnant is about 7,200 light-years, the explosion actually happened 7,200 years before the light reached Earth between April 30 and May 1, 1006. It reached an estimated −7.5 visual magnitude (over ten times as bright as Venus). This “guest star” was described by observers in China, Japan, Iraq, Egypt, and Europe, and possibly recorded in North American petroglyphs.

There appear to have been two distinct phases in the early evolution of this supernova. There was first a three-month period at which it was at its brightest; after this period it diminished, then returned for a period of about eighteen months.

As bright as SN 1006 may have shone one thousand years ago, today its remnant is barely visible. In fact, it was not identified until 1965, when the previously known radio source PKS 1459-41, near the star Beta Lupi, had the appearance of a circular shell. Over the next few years, both X-ray and optical emission from this remnant were also detected, and in 2010 very-high-energy gamma-ray emission as well. As expected for such a supernova explosion, it leaves no trace, other than the glowing remnant we see today; no associated neutron star or black hole has been found.