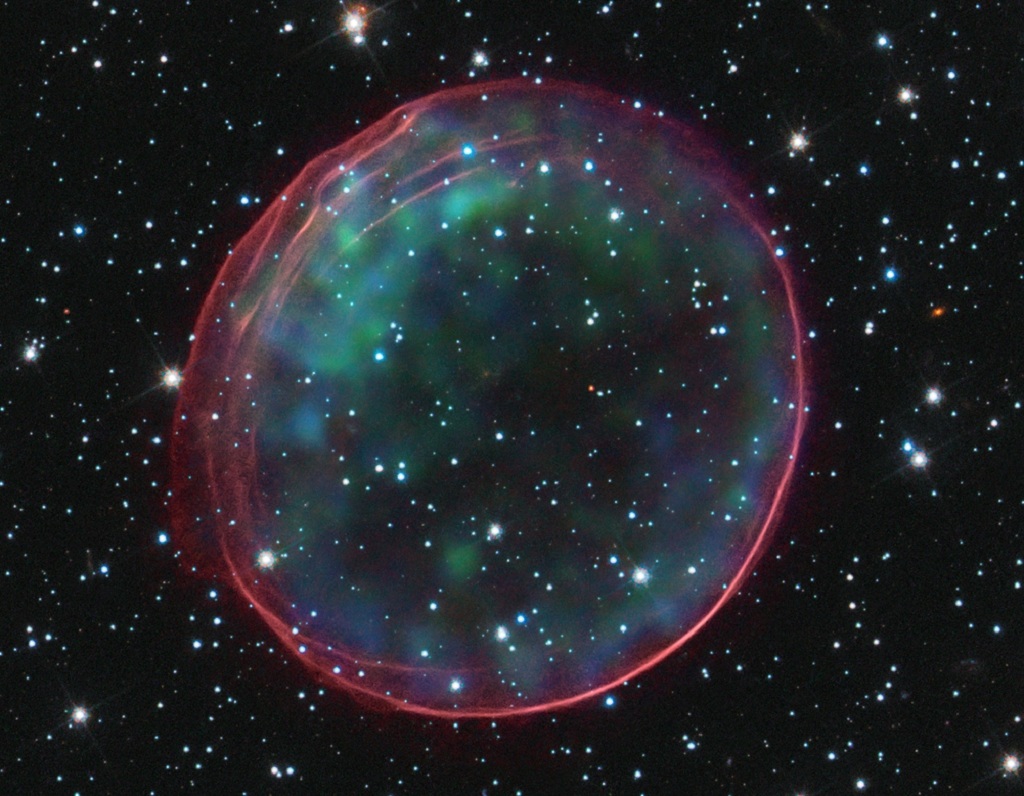 SNR 0509-67.5 (SNR 0509 for short) is the remnant of a supernova explosion in the Large Magellanic Cloud, located some 160,000 light-years away in the constellation of Dorado. It is about 23 light-years across and expanding at more than 5,000 kilometers a second, or more than 18 million kilometers an hour.

This bubble is the visible remnant of a Type 1a supernova that occurred about 400 years ago in Earth’s time frame (what means that the light from the explosion reached us about 400 years ago), which was unusually bright and energetic.

A Type Ia supernova is a result from the violent explosion of a white dwarf star (a compact star that has ceased fusion in its core). The white dwarf increases its mass beyond a critical limit by gobbling up matter from a companion star. A runaway nuclear explosion then makes the star suddenly as bright as a whole galaxy, before gradually fading from view.

Astronomers failed to find any remnant of the companion star, however, and concluded that the common scenario of Type Ia supernovae did not apply in this case. The cause of SNR 0509-67.5 can be explained best by two tightly orbiting white dwarf stars spiraling closer and closer until they collided and exploded.

The gaseous envelope formed as the expanding blast wave and ejected material from the supernova tore through the nearby interstellar medium. Ripples in the shell’s surface may be caused either by subtle variations in the density of the ambient interstellar gas, or possibly be driven from the interior by fragments from the initial explosion.

X-ray data show soft green and blue hues of material in the center of the remnant that has been heated to millions of degrees, surrounded by the glowing pink optical shell which shows the ambient gas being shocked by the expanding blast wave from the supernova. Ripples in the shell’s appearance coincide with brighter areas of the X-ray data.

There are no recorded observations of the star exploding. However, researchers have identified light from the supernova that was reflected off of interstellar dust. The light from these echoes travels a longer path than the light that travels straight toward us, and so can be seen hundreds of years after the supernova itself. This delay also allowed the astronomers to measure the spectral signature of the light from the explosion, and were able to deduce it was a Type Ia supernova.

Data from Hubble’s Advanced Camera for Surveys, taken in 2006 with a filter that isolates light from glowing hydrogen were combined with visible-light images of the surrounding star field that were imaged with Hubble’s Wide Field Camera 3 in 2010. These data were then merged with X-ray data from the Chandra X-ray Observatory taken with the Advanced CCD Imaging Spectrometer (ACIS) in 2000 and 2007.