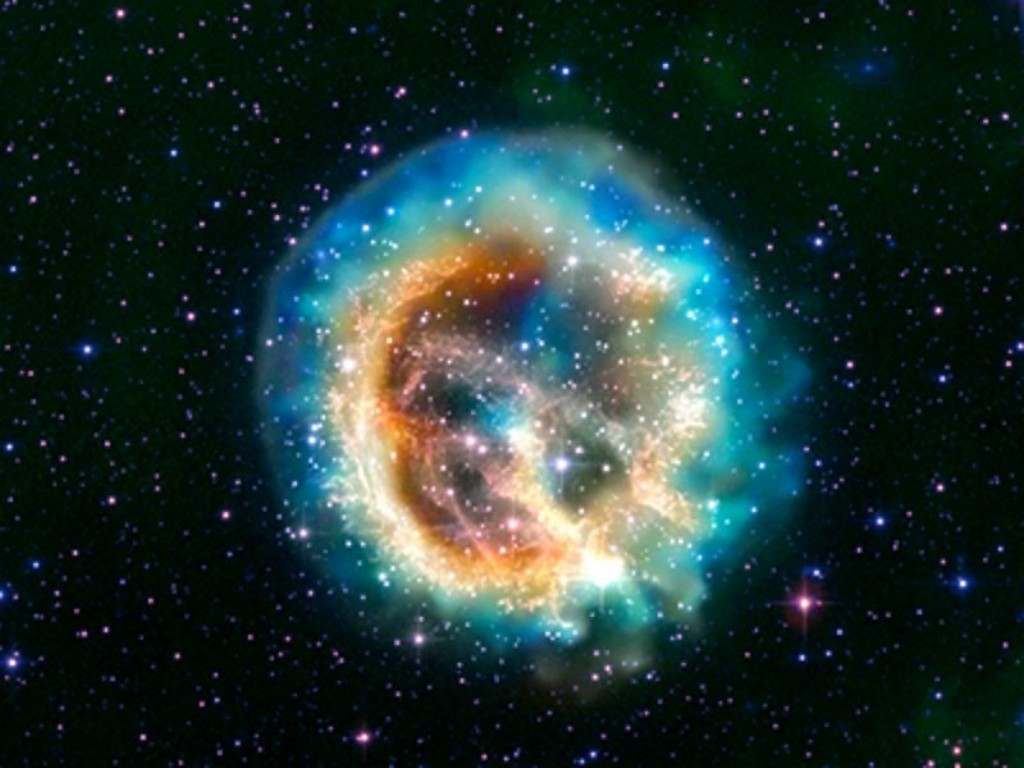 Supernova remnant 1E 0102.2-7219 (E0102 for short) is the spectacular remains of an exploded star, located about 190,000 light-years away within the Small Megallanic Cloud, in the constellation Tucana. The expanding multimillion degree remnant is about 30 light-years across and contains more than a billion times the oxygen contained in the Earth’s ocean and atmosphere.

This debris of an exploded star was created when a star that was much more massive than the Sun exploded, an event that would have been visible from the Southern Hemisphere of the Earth over 1000 years ago.

We see the remnant as it was about 190,000 years ago, around a thousand years after the explosion occurred. The star exploded outward at speeds in excess of 20 million kilometers per hour (12 million mph) and collided with surrounding gas. This collision produced two shock waves, one traveling outward, and the other rebounding back into the material ejected by the explosion.

The gas has been heated to millions of degrees Celsius by the rebounding, or reverse shock wave. The X-ray data from NASA’s Chandra X-ray Observatory show that this gas is rich in oxygen and neon. These elements were created by nuclear reactions inside the star and hurled into space by the supernova.

E0102 has a hotter oxygen-rich outer ring surrounding a cooler, denser inner ring. The two prominent filaments of oxygen gas and hot dust have “cooled” to about 30,000 degree Celsius. Most of this dust is located in the central region. Even if all of the hot dust was formed in the explosion, the estimated mass of dust is at least 100 times lower than what is predicted by theoretical models.

Images such as these, taken with different types of telescopes, give astronomers a much more complete picture of supernova explosions, like measuring the energy of the matter as it expands into the galaxy. These images also provide unprecedented details about the creation and dispersal of heavy elements necessary to form planets like Earth.

In this image of E0102, the lowest-energy X-rays are colored orange, the intermediate range of X-rays is cyan, and the highest-energy X-rays are blue. An optical image from the Hubble Space Telescope (in red, green and blue) shows additional structure in the remnant and also reveals foreground stars in the field.