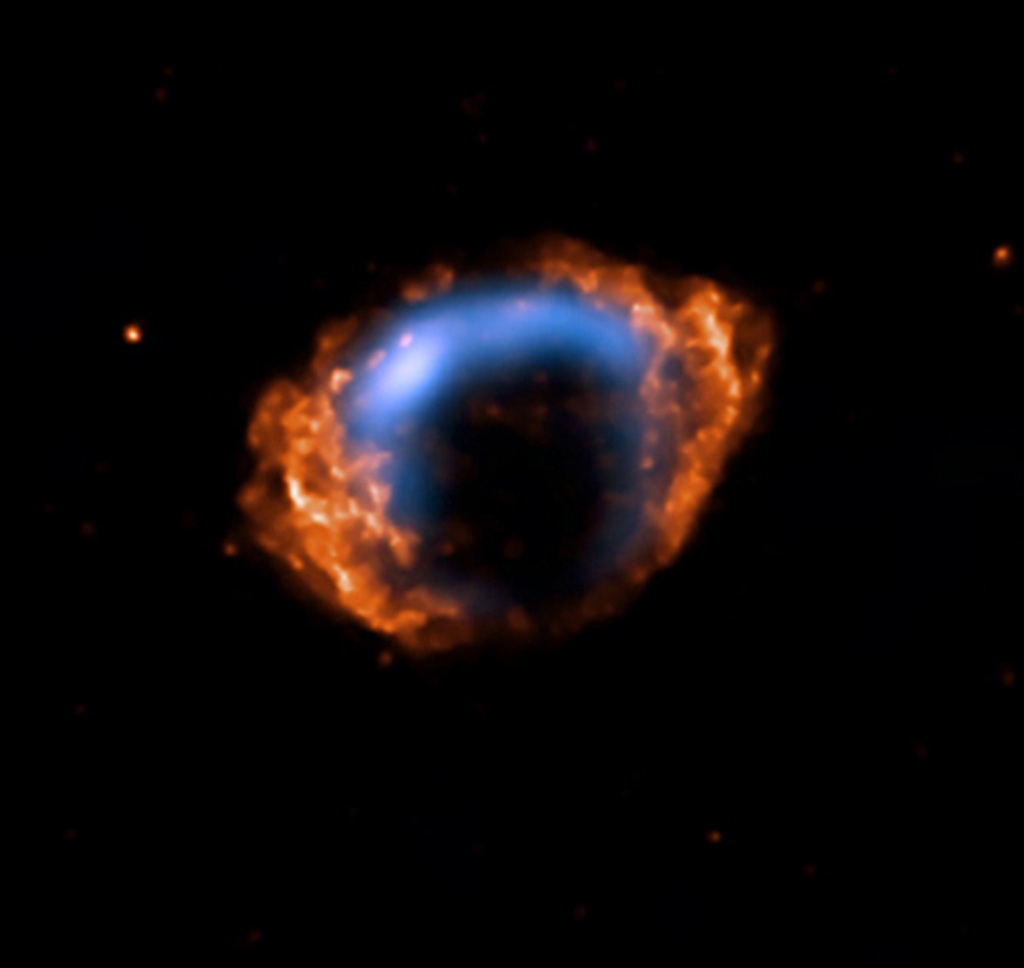 Supernova remnant G1.9+0.3 was created by the explosion of a star about 25,000 light-years away in the constellation Sagittarius, near its border with Ophiuchus. Although the explosion occurred about 25,000 years ago, its light reached Earth just about 110 years ago (around the year 1900), what makes it the youngest known supernova remnant in the Milky Way Galaxy. (Prior to this discovery in 1984, the youngest-known Milky Way supernova remnant was Cassiopeia A, at about 330 years.) The expanding remnant is now some 2.6 light-years across.

The radio image from NRAO’s Very Large Array (VLA) obtained in 1985 (shown in blue) is overlaid by NASA’s Chandra X-ray Observatory image from early 2007 (in orange). The remnant had expanded by a surprisingly large amount, about 16% since 1985. The difference in size between the two images gives clear evidence for expansion of the original supernova explosion. This rapid expansion and young age for G1.9+0.3 was confirmed by a new VLA image obtained in early 2008.

The original supernova explosion – most likely a Type Ia supernova – was not seen in optical light about 145 years ago because it occurred close to the center of the Galaxy, and is embedded in a dense field of gas and dust. This made the supernova about a trillion times fainter, in optical light, than if it had been unobscured. Fortunately, the expanding gas cloud from the explosion shines brightly in radio waves and X-rays for thousands of years. X-ray and radio telescopes can see through all that obscuration and show astronomers what they had been missing otherwise.

Supernova remnants are caused when the debris thrown outwards by the explosion crashes into surrounding material, generating a shell of hot gas and high-energy particles that glows brightly in X-rays, radio waves and other wavelengths for thousands of years. (A Type Ia supernova is a result from the violent explosion of a white dwarf star.)

In the case of G1.9+0.3 the material is expanding outwards at almost 35 million miles (56 million kilometers) per hour, or about 5% the speed of light, an unprecedented expansion speed for a supernova remnant. Another superlative for G1.9+0.3 is that it has generated the most energetic electrons ever seen in a supernova remnant.

Astronomers regularly observe supernovae in other galaxies like ours. Based on those observations, researchers estimate about three explode every century in the Milky Way. If the supernova rate estimates are correct, there should be the remnants of about 10 supernova explosions that are younger than Cassiopeia A.