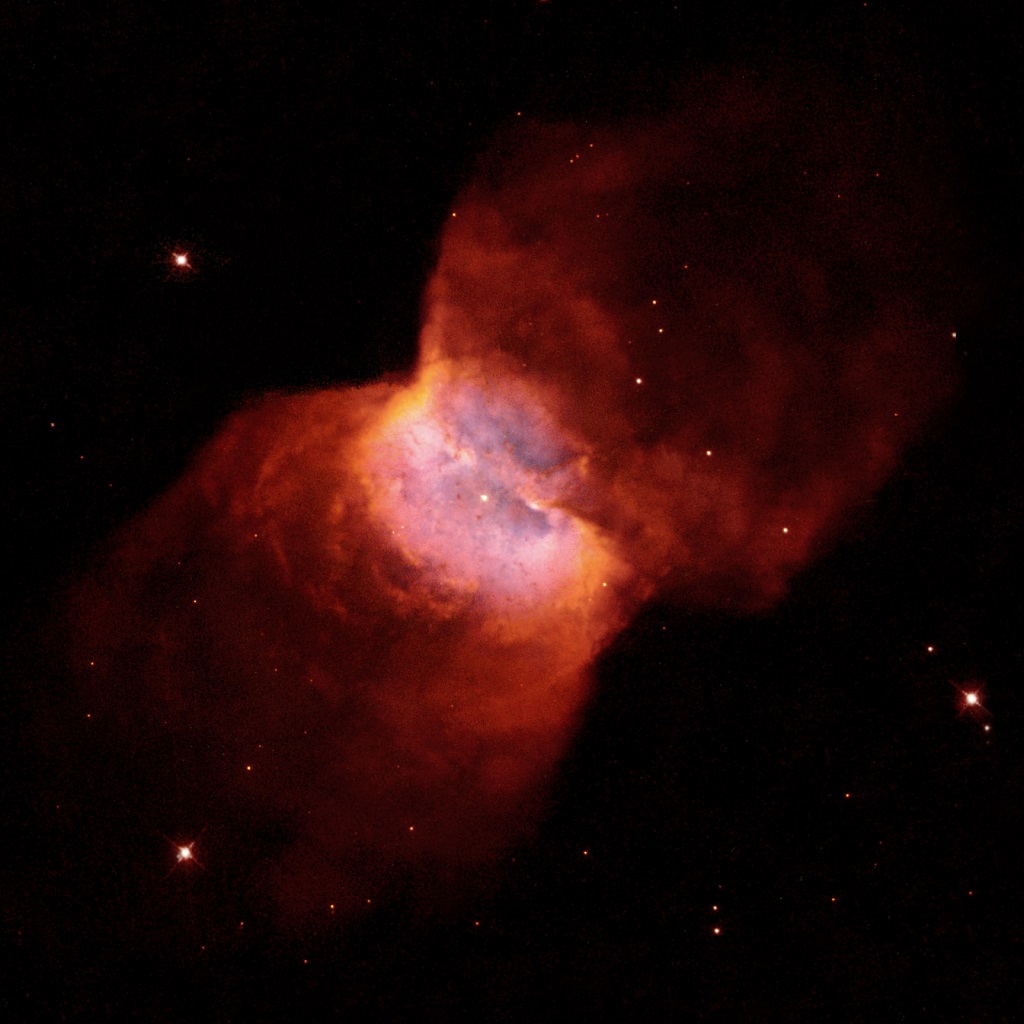 The Butterfly Nebula (NGC 2346) is a bright, unusual shaped bipolar planetary nebula with a diameter of about one-third of a light-year, located some 2,000 light-years away near the celestial equator in the constellation of Monoceros (the Unicorn).

Planetary nebulae represent the final brief stage in the life of a medium-sized star like our Sun. While consuming the last of the fuel in its core, the dying star expels a large portion of its outer envelope. This material then becomes heated by the radiation from the stellar remnant and radiates, producing glowing clouds of gas that can show complex structures. They are called “planetary” nebulae because early observers thought they looked like planets; but they don’t have anything to do with planets at all.

In this case, the nebula represents the spectacular “last gasp” of a binary star system at the nebula’s center. This is an unusual cool pair of close stars orbiting each other once every sixteen days. Millions of years ago the stars were farther apart. When one of the two stars evolved into a red giant, it literally swallowed its companion star. The companion star then spiralled downwards inside the red giant, and in the process spewed out gas into a ring around the binary system. When the red giant’s core was exposed, a fast stellar wind inflated two ‘bubbles’ of hot gas from either side of the ring.

The binary star is also variable, probably due to dust in orbit around it. The dust itself is heated by the central star, what makes the Butterfly Nebula unusually bright in the infrared part of the spectrum.

Planetary nebulae last for only about 10,000 years, a very short period in the 10-billion-year lifespan of Sun-like stars. So, over the next several thousand years, the nebula will gradually disperse into space. In about 5 billion years, our Sun will become a red giant and emit a planetary nebula – but probably not in the shape of a butterfly, because the Sun has no binary star companion.

This image is created with the Wide Field Planetary Camera 2 and the Advanced Camera for Surveys onboard the Hubble Space Telescope using three different color filters.