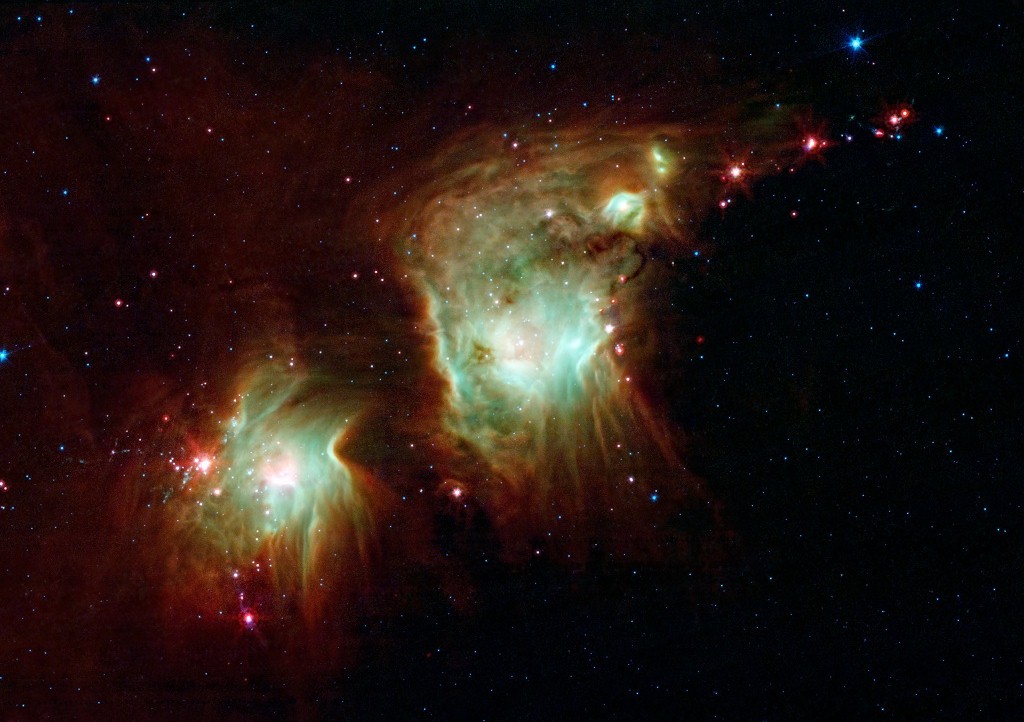 Messier 78 (also known as NGC 2068) is a reflection nebula and star-forming region of some 10 light-years across, located about 1,600 light-years away in the constellation of Orion, just to the north of Orion’s Belt.

Messier 78 is the brightest diffuse reflection nebula within the Orion B molecular cloud (LDN 1630) that also include NGC 2071, NGC 2067, NGC 2064 and NGC 2024 (the Flame Nebula). As a reflection nebula, M78 is a cloud of interstellar dust which shines in the reflected and scattered light of bright blue supergiant stars, among them the brightest, HD 38563A, and second-brightest HDE 38563B.

Spitzer Space Telescope exposes the depths of this dusty nebula with its infrared vision, showing stellar infants that are lost behind dark clouds when viewed in visible light.

Infrared investigations have given a clearer image of the open cluster of young stars which have formed in this nebula. From investigations astronomers concluded that much of the young, embedded star formation is occurring in clusters, including the formation of lower mass stars. They counted a number of 192 stars, spread over an area of 7′ angular diameter.

The two round greenish nebulae, looking like a pair of big eyeglasses, are actually cavities carved out of the surrounding dark dust clouds. The light from young, newborn stars are starting to carve out these cavities within the dust, and eventually, this will become one larger nebula. The extended dust is mostly dark but the edges show up in mid-wavelength infrared light as glowing red frames surrounding the bright interiors.

A string of baby stars that have yet to burn their way through their natal shells can be seen as red pinpoints on the outside of the nebula. Eventually these will blossom into their own glowing balls, turning this two-eyed eyeglass into a many-eyed monster of a nebula.

Messier 78 is easily seen in small telescopes to the naked eye, but looks strikingly different, with dominant, dark swaths of dust. Spitzer’s infrared eyes penetrate this dust, revealing the glowing interior of the nebulae.