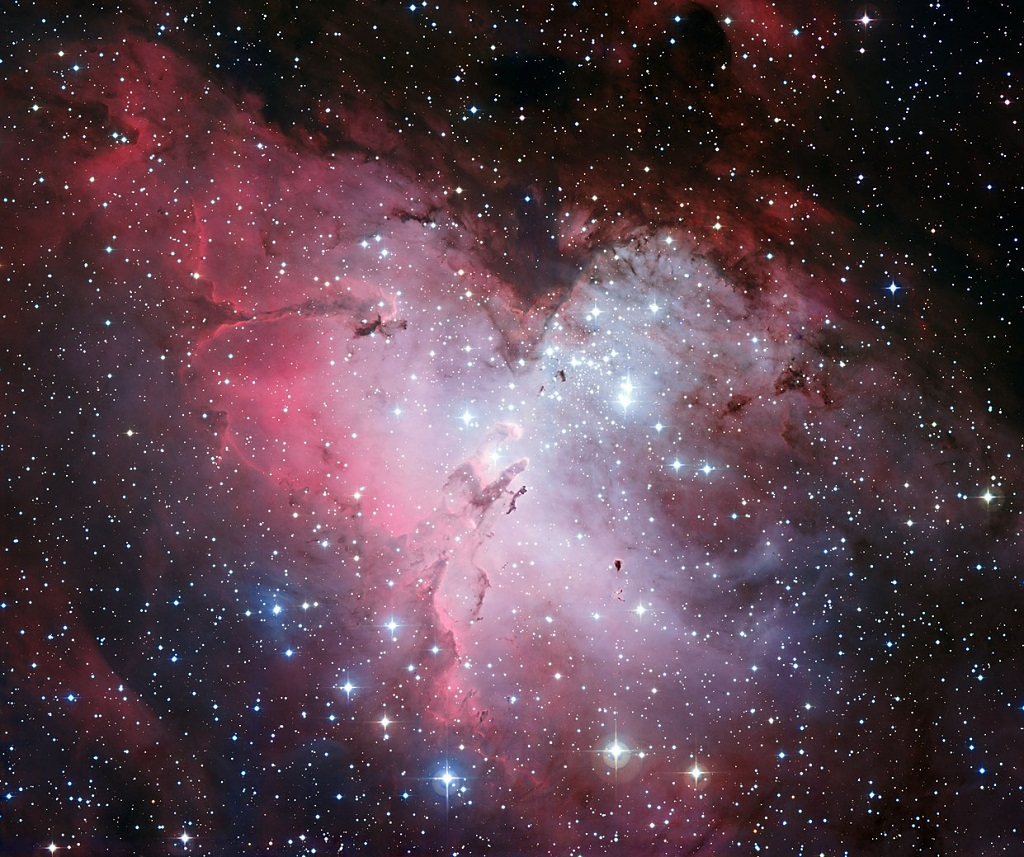 The Eagle Nebula consists of Messier 16 (also known as NGC 6611), an open star cluster, surrounded by IC 4703, an emission nebula or HII region of about 55 x 70 light-years across that lies in the Sagittarius Arm of the Milky Way, some 7,000 light-years away from Earth in the northern constellation of Serpens Cauda (the Serpent’s Tail). Its name derives from its shape that is thought to resemble an eagle.

The Eagle Nebula contains several active star-forming gas and dust regions, including the famous “Pillars of Creation” at the center and several others in the same star-forming region like the “Spire”, another large pillar in the middle left of the image. This image also shows a huge number of stars in front of, in, or behind the Eagle Nebula.

The open cluster, centered in the brightest part of the nebula to the upper right, is about 15 light-years across and has approximately 460 stars, a mass of roughly 80 solar masses, and a luminosity up to 1 million times that of the Sun. It is home to the massive and hot stars that illuminate the pillars. The cluster’s age has been estimated to be 1–2 million years, and the nebula would be about 5.5 million years old.

The pillars in the Eagle Nebula may already have been destroyed by a supernova explosion (we see the Eagle Nebula as it was 7,000 years ago). Hot gas observed by Spitzer in 2007 suggests that the area was disturbed by a supernova that exploded some 8000 to 9000 years ago. Due to the distance of the nebula, the light from the supernova would have reached Earth between 1000 and 2000 years ago. The more slowly moving shock wave from the supernova would have taken a few thousand years to move through the nebula, and would blow away the delicate pillars – but the light showing us the destruction will not reach the Earth for another millennium.

This wide-field image is a composite of 3 filters in the visible range: B (blue), V (green) and R (red), based on images obtained with the Wide-Field Imager camera on the MPG/ESO 2.2-metre telescope at the La Silla Observatory.