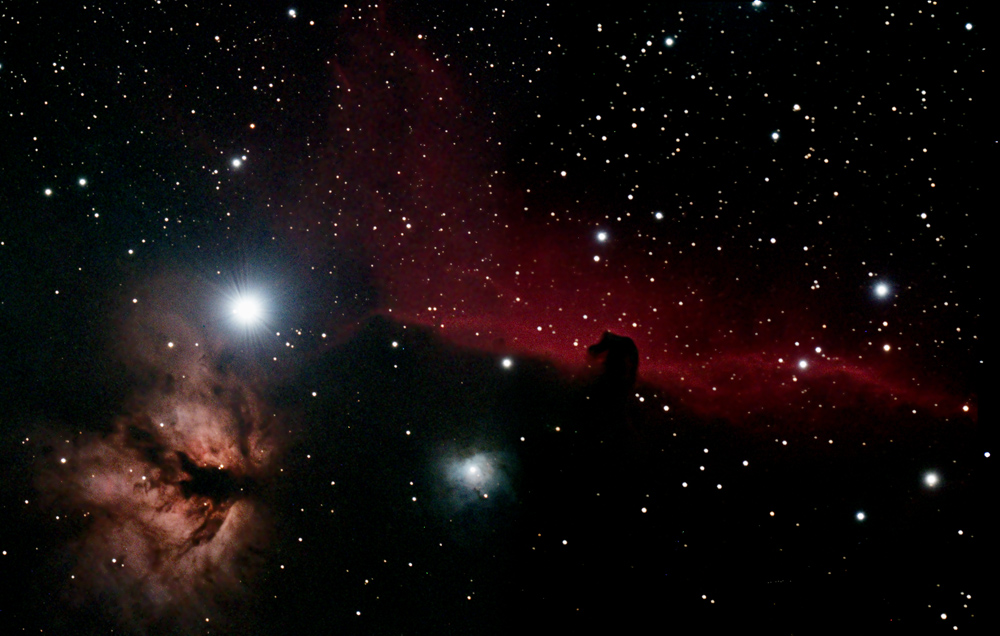 The Flame Nebula (on the left bottom) & The Horsehead Nebula (in the center) are both located about 1,500 light-years away from us in the Orion Molecular Cloud Complex, an active star-forming region in the constellation of Orion.

The Flame Nebula (also known as NGC 2024, Orion B and Sh2-277) is an emission nebula and a star-forming cloud of gas and dust that is in the process of forming a star cluster. This cluster is thought to be less than one million years old.

Intense ultraviolet light from a central massive star 20 times heavier than our Sun, and buried in the blanketing dust, is causing the cloud to glow. This star would be almost as bright to our eyes as the three stars in Orion’s belt, but the dust makes the star appear 4 billion times fainter than it really is.

The Horsehead Nebula (Barnard 33) is a diffuse dark nebula. This swirling dark cloud of dust and gas is one of the most identifiable nebulae because of its shape, which is similar to that of a horse’s head when viewed from Earth. The dark molecular cloud is visible only because its obscuring dust is silhouetted against the bright red emission nebula IC 434.

The red glow of this active site of low-mass star formation originates from hydrogen gas predominantly behind the nebula, ionized by the nearby bright, hot blue star Sigma Orionis. The darkness of the Horsehead is caused mostly by thick dust, that is blocking the light of many hot young stars just in the process of forming.