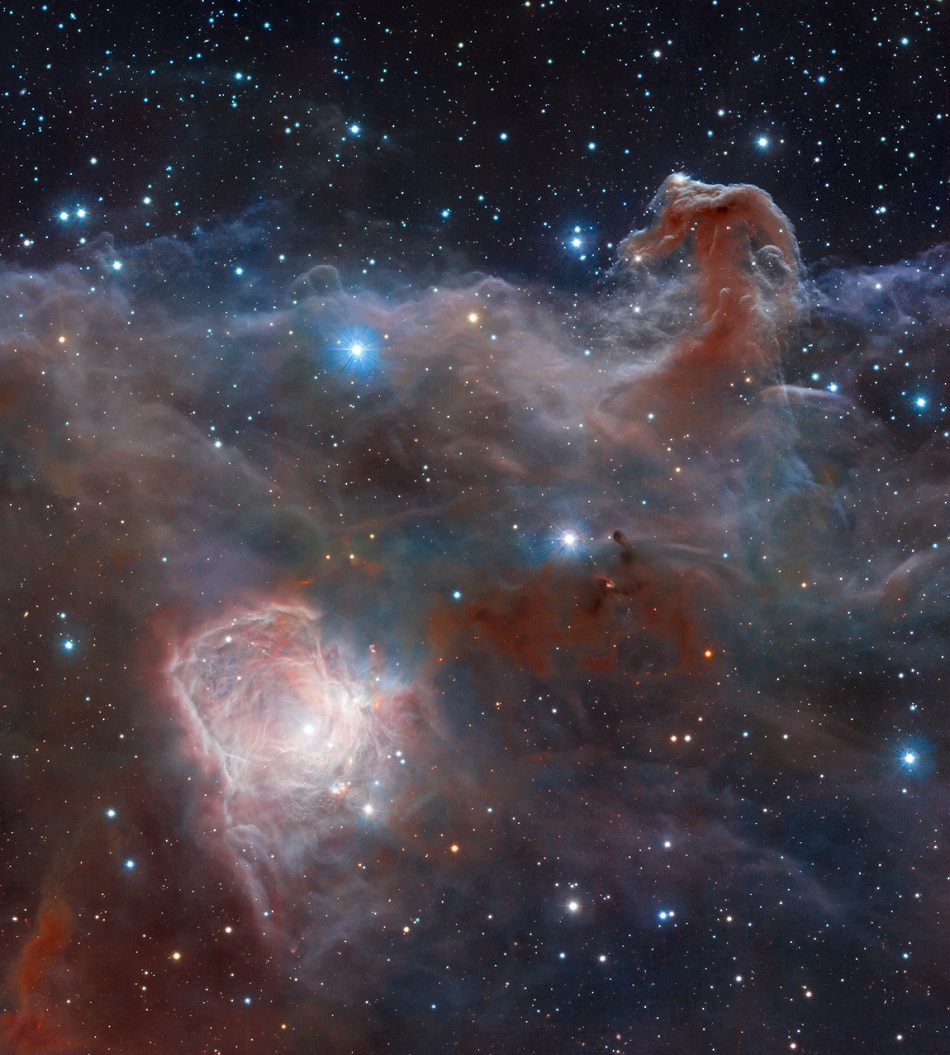 The Horsehead Nebula (Barnard 33), a diffuse dark nebula and, to its lower left, the 4 light-years wide bright blue reflection nebula NGC 2023 both lie about 1,500 light-years away from Earth. They are part of the Orion Molecular Cloud Complex, a star-forming region that covers large parts of the constellation Orion (the Hunter). Such stellar nurseries can contain over 100 known organic and inorganic gases as well of dust consisting of large and complex organic molecules.

The Horsehead Nebula is one of the most identifiable nebulae because of the shape of its swirling cloud of dark dust and gas, which is similar to that of a horse’s head when viewed from Earth. The dark molecular cloud is visible only because its obscuring dust is silhouetted against the bright emission nebula IC 434 which is illuminated by the nearby bright, hot blue star Sigma Orionis.

The darkness of the Horsehead is caused mostly by thick dust and gas, but also by the complex blocking the light of stars behind it. The heavy concentrations of dust in the nebula results in alternating sections of nearly complete opacity and transparency.

Bright spots in the Horsehead Nebula’s base are young stars just in the process of forming. One infant star is visible as a partly shrouded glow in horse’s brow. The visible heart of the nebula emerges from the gaseous complex to serve as an active site of the formation of low-mass stars.

The Horsehead Nebula is rotating. The radio waves are Doppler shifted as different parts of the nebula move toward or away from us, producing either a blueshift or a redshift. The horse’s nose is turning toward us and part of the mane is turning away–as if the horse were trying to look in our direction. Furthermore, most of the horse’s neck shares the same spin: the left side is approaching and the right side is receding.

Most of the neck will probably take about 4 million years to spin once–if the nebula survives that long. However, radiation from Sigma Orionis, hits and erodes the top of the nebula. As a result, astronomers think the Horsehead, which is about half a million years old, will endure for only another 5 million years. That’s enough time to let the nebula pirouette once before its demise.

The Horsehead’s rotation has sculpted the gas and dust into its unique shape. The rotation has caused a centrifugal force that’s flung what is now the horse’s nose, on the left, and the mane, on the right, away from the neck, thereby giving the nebula its beautiful appearance. Without this rotation, the Horsehead Nebula probably wouldn’t look like a horse.

NGC 2023 is one of the brightest reflection nebulae in the sky and is forming a thin blister at the edge of IC 434. The B type star HD37903, with a surface temperature of 22,000 degrees, is responsible for most of the excitation of gas and dust within NGC 2023 and lies in front of IC 434.

This picture was created with the world’s largest survey telescope VISTA (Visible and Infrared Survey Telescope for Astronomy) by images taken through J, H and Ks filters in the near-infrared part of the spectrum. The data are from VISTA and the Hubble Space Telescope. The image shows about half the area of the full VISTA field (of the of the Flame Nebula and its surroundings) and is about 40 x 50 arcminutes in extent. The total exposure time was 14 minutes.