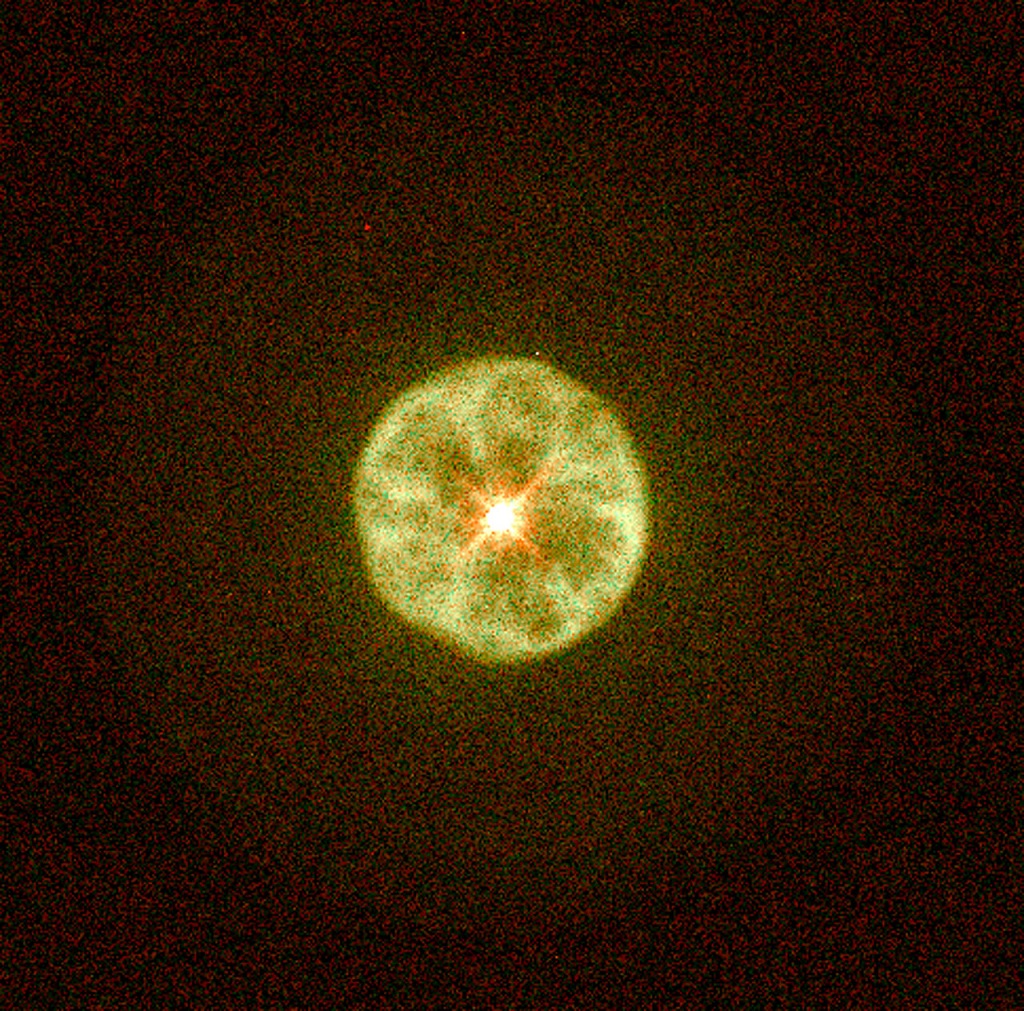 The Lemon Slice Nebula (IC 3568) is a relatively young planetary nebula with a diameter of only about 0.4 light-years, and growing at the rate of some dozen kilometers per second. It is located about 4,500 light-years away from Earth in the constellation of Camelopardalis, the Giraffe (just 7.5 degrees from Polaris).

Planetary nebula have nothing to do with planets except that to early astronomers these round objects looked like the planets Uranus and Neptune. Planetary nebula are the last stage of life for stars like our Sun. After billions of years, stars reach a point where there is little hydrogen gas to burn. To help convert their stellar furnaces to burn other elements such as helium, the star balloons in size to become a red giant. Eventually, however, the star collapses back on itself. This increases the temperature at its core and most of the stars material is catapulted into space, forming a bubble around the star. Then the star cools down to become a white dwarf. This doesn’t happen all at once but in stages.

The Lemon Slice Nebula is one of the most simple nebulae known, with an almost perfectly spherical shape. The central star is a very hot and bright Red Giant, and can be seen as a red-orange hue in a small telescope. The nucleus is surrounded by very bright matter, apparently perfectly round, and fading out a little at the edges. A smooth, faint halo of interstellar dust surrounds the bright region.

Many planetary nebulae show bi-polar, twin-lobed, structures, or are obvious double ring affairs. But IC 3568, however, reveals just a faint structure. The bright inner region resolves into a complex structure with linear features pointing away from the central star, making the nebula look like the inside of a lemon, which is reinforced through false color. Deep imagery reveals an inner shell about 0.2 light-years.

Brightening at the edges, the Lemon Slice looks more like a shell, the whole lemon as it were. The star, with a temperature estimated from two methods at 57,000 Kelvin and still heating (at a luminosity a couple thousand times that of the Sun), has recently made the transition to becoming hot enough to marginally doubly-ionize the nebula’s helium.