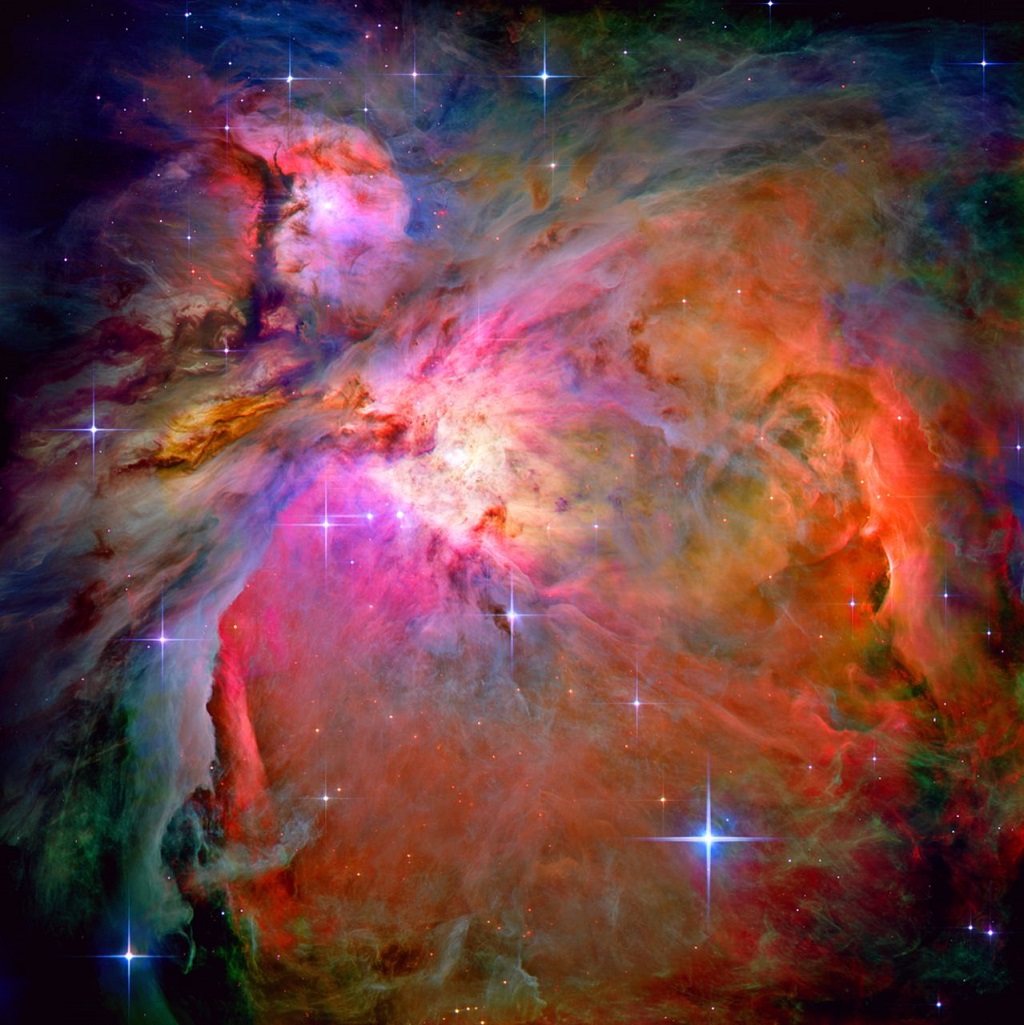 The Orion Nebula (also known as Messier 42 or NGC 1976) is a diffuse emission and reflection nebula of about 24 light-years across, located 1,344 ± 20 light-years away from Earth in the constellation of Orion (the Hunter), south of Orion’s Belt. It is receding from us at approximately 17.5 kilometes per second.

The nebula which is estimated to be some 300,000 years old, forms a roughly spherical cloud that peaks in density near the core. It has a mass of about 2,000 times the mass of the Sun, and it is one of the brightest nebulae in the night sky. The cloud has a temperature ranging up to 10,000 K, but this temperature falls dramatically near the edge of the nebula. Stars are forming throughout the Orion Nebula, and due to this heat-intensive process the region is particularly prominent in the infrared.

The detached northeastern portion is the designated Messier 43 (or De Mairan’s Nebula, after its discoverer Jean-Jacques Dortous de Mairan), a star-forming (H II) region of some 3 light-years across, separated from the main nebula by only a dark dust lane. Both nebulae are part of the massive stellar nursery called the Orion Molecular Cloud complex, which includes several other nebulae, such as the Horsehead Nebula (Barnard 33) and the Flame Nebula (NGC 2024). The Orion Molecular Cloud complex is one of the closest massive star-forming regions to Earth.

In the heart of the Orion Nebula lies a tight open star cluster, known as the Trapezium, or Orion Trapezium Cluster. It is among the very youngest open clusters known, where new stars are still being born. Observations have revealed approximately 700 stars in various stages of formation within the cluster. The Trapezium may be a component of the much larger Orion Nebula Cluster, an association of about 2,000 stars within a diameter of 20 light-years. Other protostars are being formed in molecular clouds associated with the nebula. These clouds contain enough gas to produce several thousands more new stars.

Detailed images from the Hubble Space Telescope have revealed at least 150 young stars surrounded by protoplanetary disks that are believed to be embryonic solar systems that will eventually form planets. The abundance of such objects in the Orion nebula strengthens the argument that planet formation is a common occurrence in the Universe. Additionally, astronomers have directly observed brown dwarfs, more than 50 variable stars, intense and turbulent motions of the gas, and the photo-ionizing effects of massive nearby stars in the nebula.

It is very easy to find the Orion Nebula, as it surrounds the Theta Orionis multiple star or cluster, seen to the naked eye in the middle of the sword of Orion. Under fairly good conditions, the nebula itself can also be glimpsed with the naked eye as a faint nebulosity around this star. It is one of the most photographed objects in the night sky.