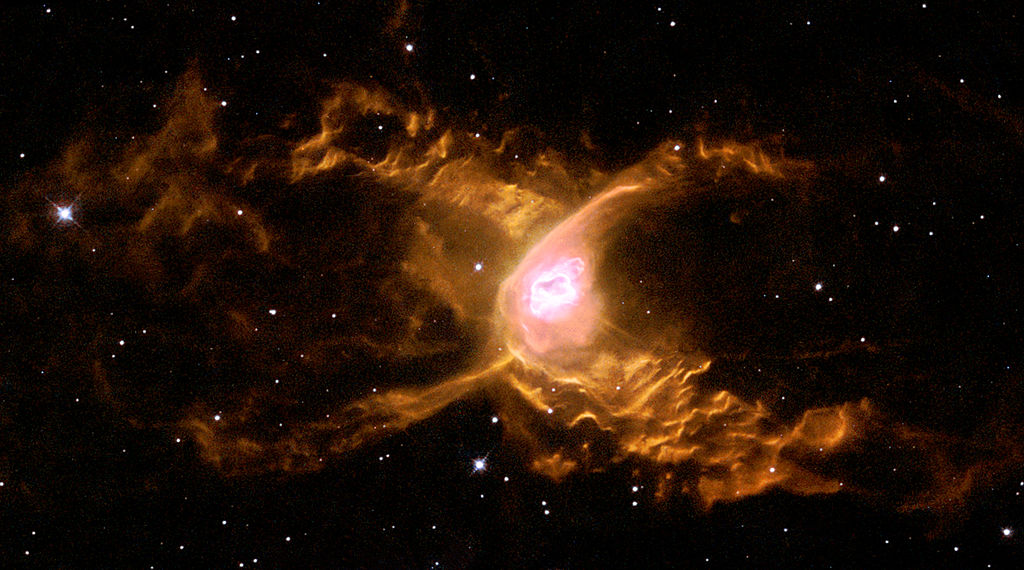 The Red Spider Nebula (NGC 6537) is a “butterfly” or bipolar (two-lobed) planetary nebula located near the heart of the Milky Way, in the northwest of the Sagittarius constellation. The exact distance from Earth is not known; estimations vary from 1900 up to 4000 light-years. Therefore it’s diameter is also unknown. The Red Spider is moving toward us at 17.3 kilometers per second.

Planetary nebula have nothing to do with planets except that to early astronomers these round objects looked like the planets Uranus and Neptune. Planetary nebula are the last stage of life for stars like our Sun. After billions of years, stars reach a point where there is little hydrogen gas to burn. To help convert their stellar furnaces to burn other elements such as helium, the star balloons in size to become a red giant. Eventually, however, the star collapses back on itself. This increases the temperature at its core and most of the stars material is catapulted into space, forming a bubble around the star, often in the form of a “butterfly” or two-lobed structure as in the case of the Red Spider. Then the star cools down to become a white dwarf.

The surface temperature of the central white dwarf in the Red Spider is an incredible 540,000 degrees F, more than 50 times hotter than the Sun, what makes it one of the hottest stars known.
It produces a powerful and hot (≈10,000 K) wind blowing with a speed of 2000-4500 kilometers per second, which has generated waves 100 billion kilometres high. The waves themselves move outwards at a slower rate of 300 km/s. These winds are what give this nebula its unique ‘spider’ shape and also contribute to the expansion of the nebula.

The gas walls of the two lobed structures are not at all smooth, but rather are rippled in a complex way. These waves are driven by stellar winds radiating from the hot central white dwarf, much as a wind passing over a lake can generate waves on the water. Supersonic shocks formed when the local gas is compressed and heated in front of the rapidly expanding lobes.

The Red Spider has an ‘S’-shaped symmetry of the lobes – the lobes opposite each other appear similar. This is believed to be due to the presence of a companion to the central white dwarf (none of which are visible in the image).

This Hubble Space Telescope image was obtained on 12 September 1997 with the Wide Field and Planetary Camera 2 in five different filters. Here, light from sulphur ions is displayed in red, nitrogen ions in orange, and ionised hydrogen (H-alpha) in green, while atomic oxygen is in light blue and ionised oxygen in dark blue.