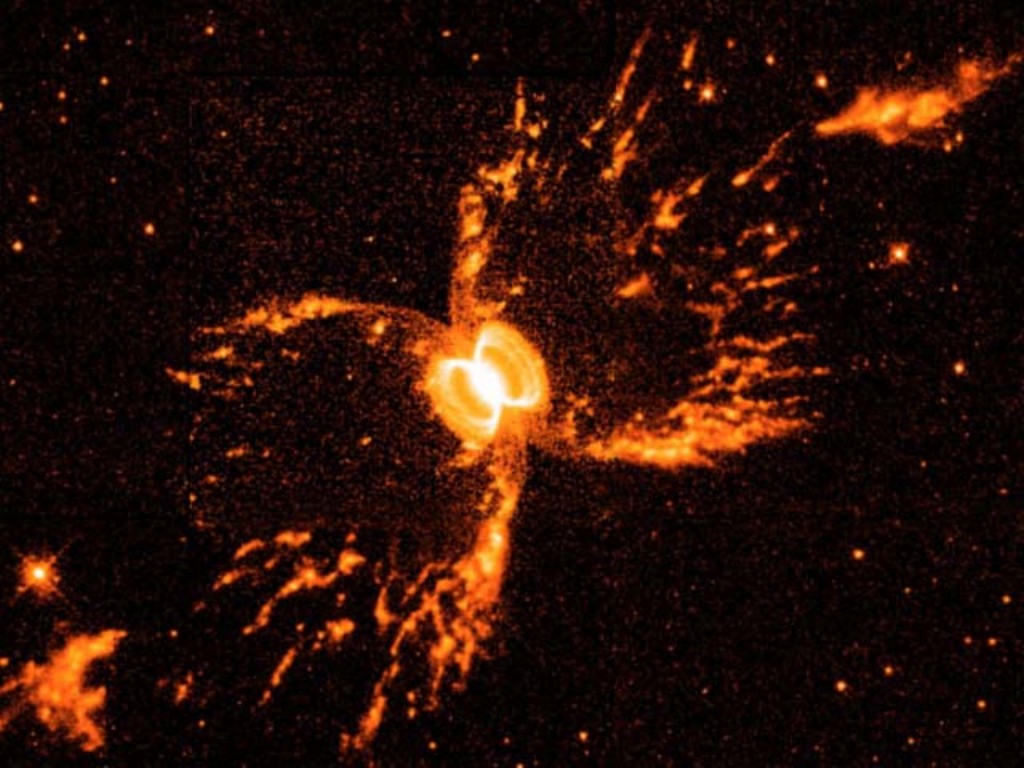 The Southern Crab Nebula (He2-104) is a bipolar planetary nebula of several light-years long, located about 7000 light-years away in the southern constellation of Centaurus. It is dubbed the “Southern Crab Nebula” because, from Earth, it looks like the body and legs of a crab. The adjective “southern” distinguishes it from the Crab Nebula, which is in the northern sky. The nebula is approaching us at 143.6 kilometers per second.

Images taken with Earth-based telescopes show only the larger, hourglass-shaped nebula, while this Hubble image also reveals a small, bright nebula embedded in the center of the larger one.

When a star with a mass up to eight times that of the Sun approaches the end of its life, it blows off its outer shells and begins to lose mass. This allows the hot, inner core of the star to radiate strongly, causing this outward-moving cocoon of gas to glow brightly as a planetary nebula. Over the next several thousand years, this nebula will gradually disperse into space.

At the center of the Southern Crab lies a pair of aging stars, each with a mass roughly equal to that of the Sun. They cannot be seen in this image because they are buried in the glow of the tiny, central nebula). One of them is a red giant, a bloated star that is exhausting its nuclear fuel and is shedding its outer layers in a powerful stellar wind. Its companion is a hot, white dwarf, a stellar zombie of a burned-out star. Because it is far away from its partner, it could take as much as 100 years for the two to orbit around each other.

This odd duo is called a symbiotic system. The red giant star turns out to be a Mira variable, a pulsating star that is dumping material into an accretion disk surrounding the white dwarf and then spirals onto its hot surface. Gas continues to build up on the surface until it sparks an eruption, blowing material into space.

This explosive event may have happened twice in the Southern Crab. Astronomers speculate that the hourglass-shaped nebulae represent two separate outbursts that occurred several thousand years apart. The jets of material in the lower left and upper right corners may have been accelerated by the white dwarf’s accretion disk and probably are part of the older eruption.

It is thought that when enough mass keeps falling onto the white dwarf, this might happen again, and will create another expanding hourglass-shaped nebula.