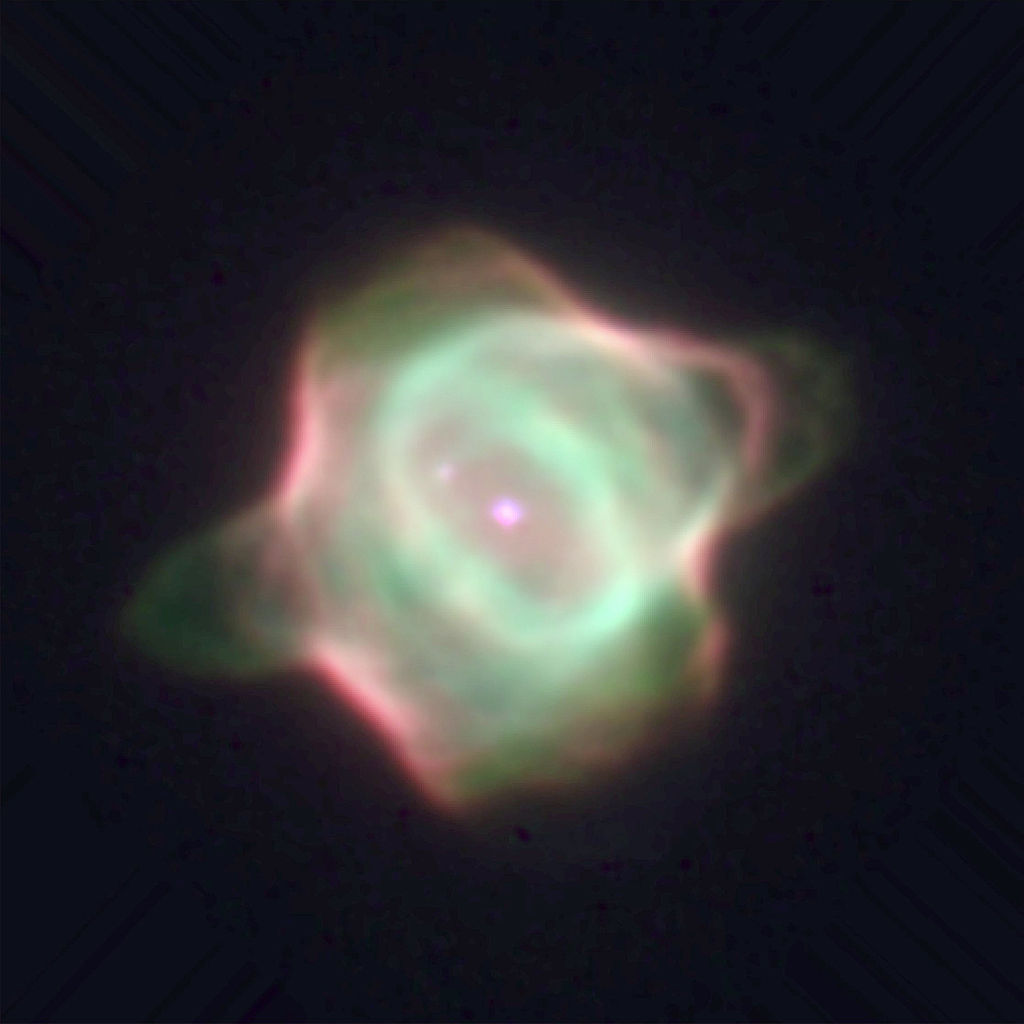 The Stingray Nebula (designated Henize 1357, Hen 3-1357) is the youngest known planetary nebula, located about 18,000 light-years away in the southern constellation Ara. It has a relatively small size (some 0.16 light-year across, one-tenth the size of most other known planetary nebula). However, it is about 130 times larger than our Solar System and is continuously expanding. It is named the Stingray because its shape is similar to the catfish.

This nebula was created when a dying star (a supergiant) exhausted its shell of gases, and now shines like a neon light. This shell of gas is illuminated by the star remaining in the center of the nebula. As the nebula continues to move away from the star, the core of the star – which has become a white dwarf — is heated and illuminates the gas.

Forty years ago the Stingray nebula was still a protoplanetary nebula in which the gas had not yet become hot and ionized. It is now considered to be a planetary nebula, as its central star has warmed up long enough in the last 40 years to light the gases. Such young nebulae are found very rarely, because it takes 100 years for a dying star to turn into a visible planetary nebula, which means very little considering the life of a star. Typically, stars live for millions of years. This nebula will help astronomers to understand this short and still poorly known transition phase which leads to the formation of a new planetary nebula.

This image shows how the outer shells of gas are collimating the continuing outflow of gas from the central star — an important observation, as the process of how these outflows become collimated has not been well understood.

Stingray’s central white dwarf star faded by a factor of three between 1987 and 1995. Observations also revealed a companion to the white dwarf, seen diagonally above it at 10 o’clock in this image. Astronomers suspect that the companion account for the complex shapes and rings of this planetary nebula.

A spur of gas (green) is forming a faint bridge to the companion star due to gravitational attraction. The image also shows a ring of gas (green) surrounding the bright central white dwarf, with bubbles of gas to the lower left and upper right of the ring.

The wind of material propelled by radiation from the hot central star has created enough pressure to blow open holes in the ends of the bubbles, allowing gas to escape. The red curved lines represent bright gas that is heated by a “shock” caused when the central star’s wind hits the walls of the bubbles. The colors shown are actual colors emitted by nitrogen (red), oxygen (green), and hydrogen (blue).