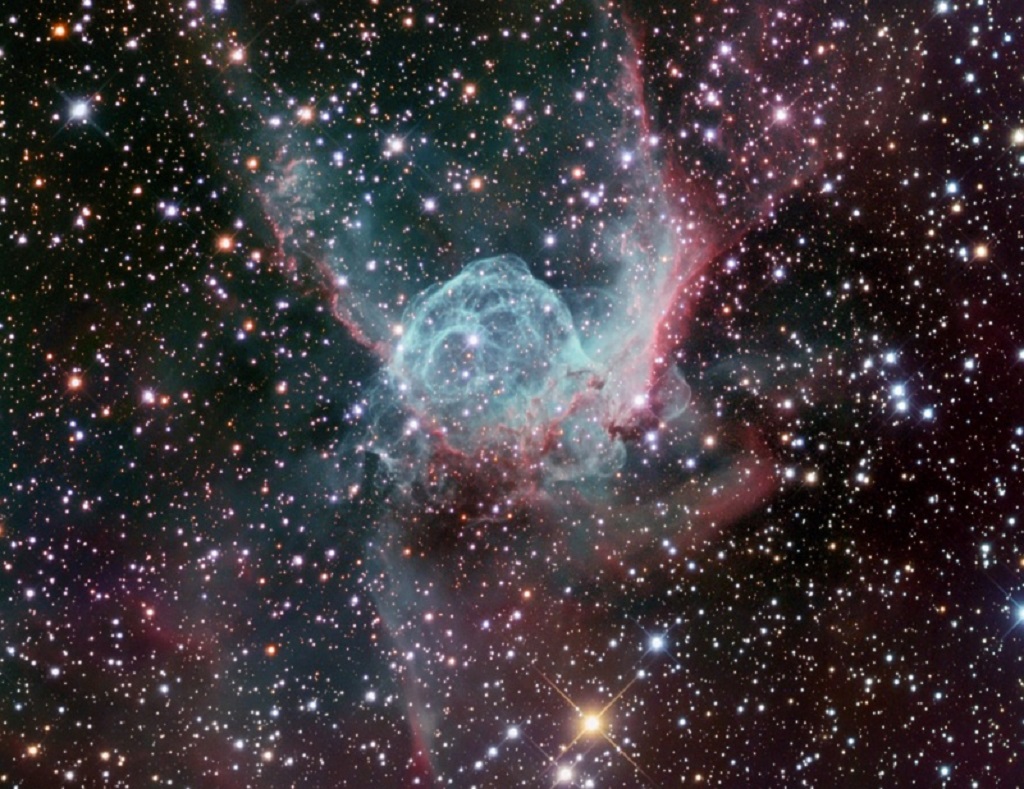 Thor’s Helmet (designated NGC 2359 and Sh2-298) is an emission nebula of about 30 light-years across, located approximately 15,000 light-years away from Earth in the constellation of Canis Major (the Great Dog), about 8o northeast of Sirius. Its nickname is due to the remarkable resemblance to depictions of the headwear donned by the famed Norse god of thunder.

The helmet-shaped nebula with “wings” consists of two distinct components. The inner component is an expanding cosmic bubble, blown fairly recently by the energetic winds of the extremely hot Wolf-Rayet star* HD 56925 (seen near the center of the nebula), which is thought to be in a brief, pre-supernova stage of evolution. As the bubble ploughs through the interstellar medium, it enriches itself with more gas and dust. The bubble’s mass is estimated to be about twenty times the mass of the Sun.

The bubble appears to be made up of “shells” of material ejected from the star. These shells are made of nearly pure “star stuff” and glow blue due to oxygen atoms in the glowing gas. The powerful winds of HD 56925 that smash into the surrounding molecular cloud are thought to have contributed to the more complex shape and bow-shaped structure of shocked gases (bow shocks) curved bow-shock structure of Thor’s Helmet.

The outer component (the “wings”) is a U-shaped diffuse star-forming (HII) region of illuminated gases ejected at an earlier time by the massive progenitor of the Wolf-Rayet star. This region, dominated by hydrogen gas, glows red.

This image was acquired from Fair Dinkum Skies, Western Australia (an affiliation of New Mexico Skies and Pingelly Heights Observatory).

* Wolf-Rayet stars are extremely rare (only about 300 are known presently) and short-lived super-hot blue giant stars which start their lives with dozens of times the mass of our Sun, but rapidly loose most of it through a powerful stellar wind, with speeds of millions of kilometers per hour. They are also highly luminous, from tens of thousands to several million times the luminosity of the Sun, although not exceptionally bright visually since most of their output is in far ultraviolet and even soft X-rays. They are doomed, within a few million years, to explode as supernovae.