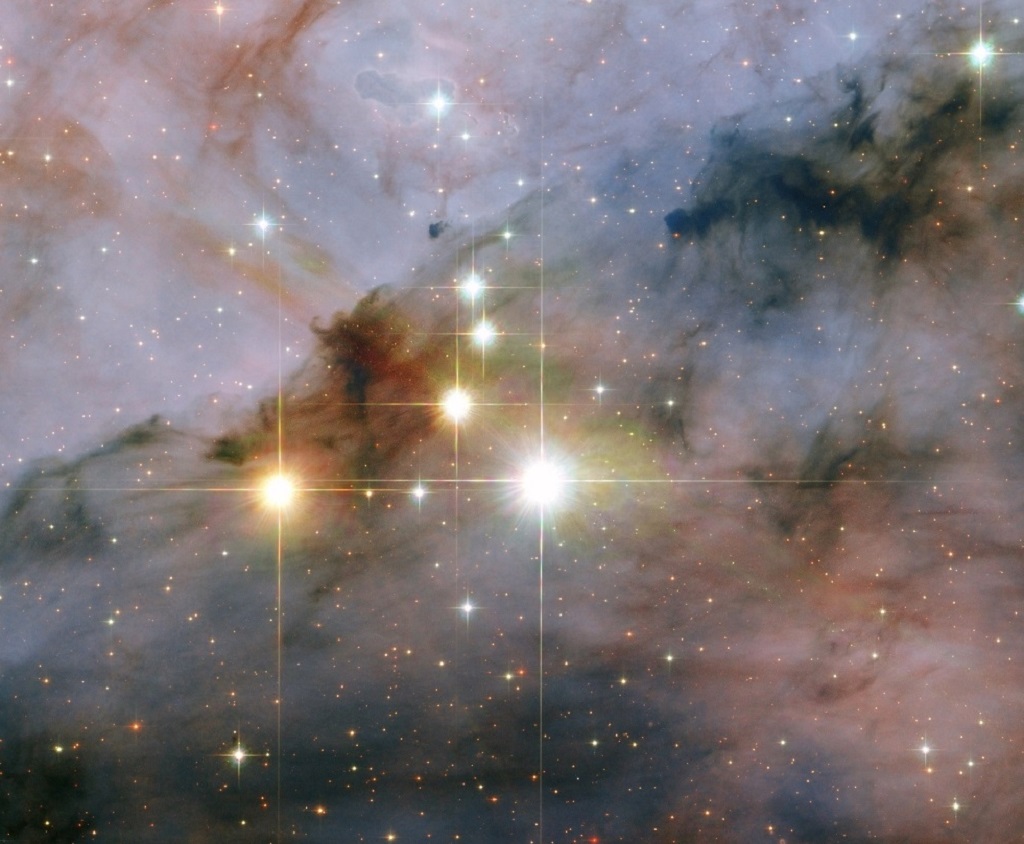 Trumpler 16 is an open star cluster within the Carina Nebula (NGC 3372 or the Eta Carinae Nebula), located about 7,500 light-years away from Earth in the southern constellation of Carina (the Keel). It is slowly moving toward us at roughly 25 kilometers per hour.

This young cluster contains over 560 stars, including a significant population of very young stars, and three of the biggest and most impressive stars from our galaxy: Eta Carinae (not visible in this image), WR 25 and Tr16-244. Although intermediate-mass stars have been forming continuously over the last 10 million years, the high-mass stars formed within the last 3 million years.

What seems to be a single bright star might actually turn out to be several stars close together. Eta Carinae, with a mass of 100 to 150 times the mass of our Sun, probably coexists in a binary state with another massive supergiant; WR 25, the brightest object in the above image, consists of at least two separate stars of which the brightest star appears to be about 50 times the mass of our Sun. Additionally, Tr16 -244 (the third brightest, just to the upper left of WR 25) consists of at least three individual stars. The second brightest in this image, to the left of WR 25, is a low-mass star located much closer to Earth than the Carina Nebula.

These stars are very bright and they produce incredible amounts of heat, emitting most of their radiation in the ultraviolet and appearing blue in colour. They are so powerful that they burn through their hydrogen fuel source faster than other types of stars, leading to a ‘live fast, die young’ stellar lifestyle. Winds from these stars are likely significant contributors to the large bubble that the star cluster sits in.

Stars like Eta Carinae, WR 25 and Tr16-244 are relatively rare compared to other, cooler types. They interest astronomers because they are associated with star-forming nebulae, and influence the structure and evolution of galaxies.