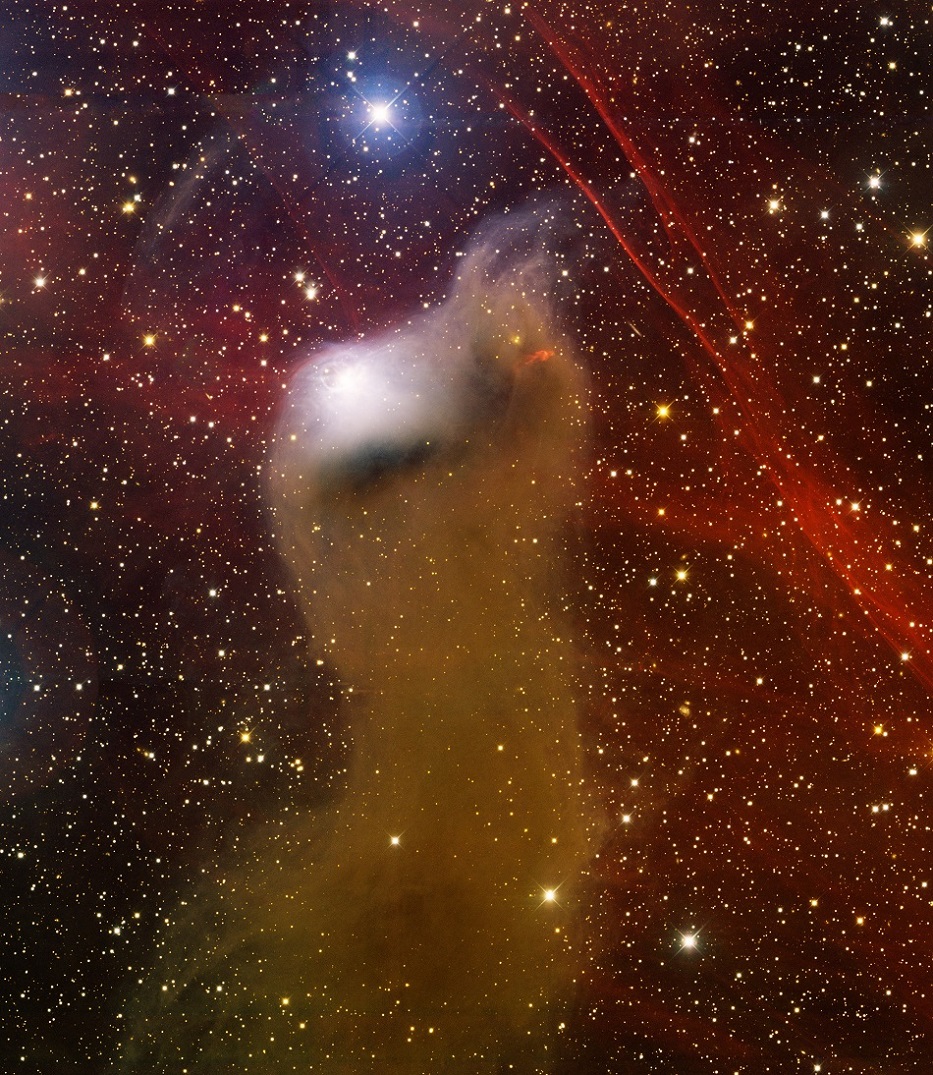 VdB 152 (also known as Cederblad 201) is a blue reflection nebula that glows atop of a dark Bok globule (1) called Barnard 175. This complex, also called Wolf’s Cave, spans about 7 light-years and is located about 1,400 light years-away from Earth in the northern constellation of Cepheus.

The “vdB” stands for “van den Bergh”; vdB 152 is reflection nebula number 152 in Sidney van den Bergh’s Catalog of Reflection Nebulae, created in 1966 and that contains 158 reflection nebulae. Barnard 175 was cataloged by E. E. Barnard in “A Photographic Atlas of Selected Areas of the Milky Way” from photographs made at Lick Observatory from 1889-1895, but not printed until 1913.

Described as a “dusty curtain” or “ghostly apparition”, vdB 152 is very faint. Near the edge of a large molecular cloud, interstellar dust in the region blocks most of the starlight behind it or scatter light from the embedded bright star (the 9.3 magnitude star B.D. +69° 1231) giving parts of the nebula a characteristic blue color. Ultraviolet light from the star is also thought to cause a dim reddish luminescence in the nebular dust.

Though stars do form in molecular clouds, this star seems to have only accidentally wandered into the area, as its measured velocity through space is very different from the cloud’s velocity.

Embedded in the top right side of the nebula is the Herbig Haro object (2) HH 450, a jet emitted from a newly forming star. The thin, red filaments of a huge supernova remnant, SNR 110.3+11.3, in the upper-right corner of the image, appear to be approaching vdB 152 and may or may not collide with it in the future.

This image was obtained with the wide-field view of the Mosaic camera on the Mayall 4-meter telescope at Kitt Peak National Observatory, generated with observations in the B (blue), V (green), I (yellow) and Hydrogen-Alpha (red) filters. In this image, North is down and East is to the right.

Notes:
1. Bok globules are dark clouds of dense cosmic dust and gas within star-forming regions in which usually star formation takes place. They most commonly result in the formation of double or multiple star systems.

2. Herbig-Haro objects – named after astronomers George Herbig and Guillermo Haro who studied the outflows in the 1950s – are small nebulae produced by outflows ejected by newly born stars, and are formed when narrow jets of gas ejected by young stars collide with clouds of gas and dust nearby, at speeds of several hundred kilometers per second. They are usually highly obscured by the clouds of gas and dust from which they formed.