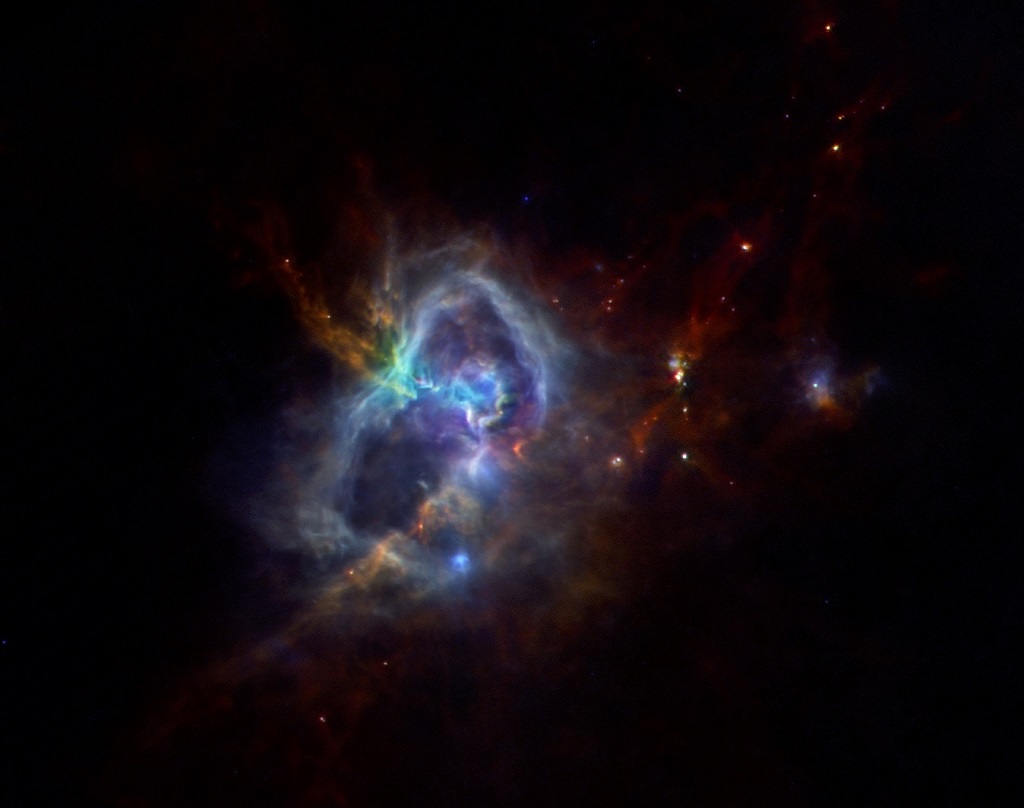 W40 (also known as Sh2-64 and RCW 174) is a stellar nursery of some 25 light-years across, located between 1,000 and 2,000 light years-away from Earth in the northern constellation of Aquila (the Eagle) close to the border with Serpens Cauda (Serpent’s Tail).

This dark cloud is one of the nearest massive star-forming (HII) regions known, and is part of Gould’s Belt, a giant ring of stars – tilted to the Milky Way by 20 degrees – that circles the night sky because the Solar System just happens to lie near the center of the belt.

The stellar nursery is so shrouded in dust that no infrared satellite before Herschel has been able to see into it. Thanks to Herschel’s superior sensitivity at the longest wavelengths of infrared, I’m showing you the first picture of the interior of W40.

Altogether, about 600 newly forming stars are crowded into these colorful filaments of dust. It is estimated that about 150 of these are protostars, celestial objects in the final stages of formation. Each one just needs to ignite nuclear fusion in its core to become a true star. The other 450 objects are insufficiently developed to be considered protostars, but these too will eventually become stars.

The blue area is home to a young OB association with at least three young massive OB stars that are illuminating the ionized hydrogen gas, causing it to shine. (OB associations usually contain 10–100 massive stars of spectral class O and B and, in addition, hundreds or thousands of low- and intermediate-mass stars).

The bright nebula is expanding into the surrounding medium, compressing the ambient gas on its way. This has created a second generation of very young protostars which are only seen at the far-infrared wavelengths accessible to Herschel.

At least 50 percent of the stars in our Milky Way galaxy formed in massive clusters of thousands of stars similar to W40. Evidence suggests that the Solar System developed in such a cluster almost 5 billion years ago.

W40 is difficult to view with optical telescopes because it lies less than 3 degrees from the central plane of the Milky Way, behind obscuring clouds of interstellar dust and gas.

This image was taken on October 24, 2009 using two of Herschel’s instruments: the Photodetector Array Camera and Spectrometer (PACS) and the Spectral and Photometric Imaging Receiver (SPIRE).