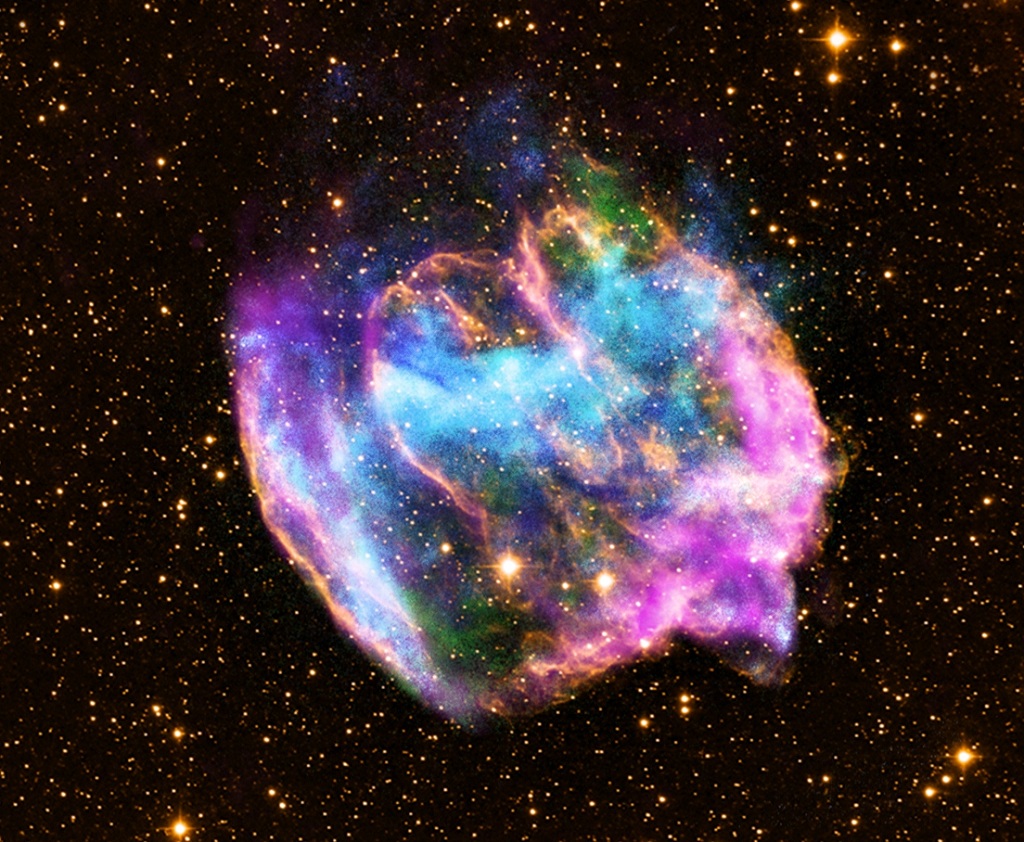 This barrel-shaped remnant has four infrared “rings” of about 25 light-years in diameter around the “barrel”, and is probably the result from a type Ib or Ic supernova explosion, making it the first of its kind to be discovered in our Milky Way.

A supernova is a phenomenon in which a star explodes in the final phase of its life. There are two types: Type I and Type II. The Type I does not show hydrogen in the spectra. The Type I category is sub-divided into Type Ia, Type Ib and Type Ic supernovae. Among these, Type Ia are explosions of white dwarf stars. The other group, Type II, are explosions of massive stars (initially more than 8 times the mass of the Sun). The Type II supernovae do show hydrogen in their spectra.

Types Ib and Ic supernovae are caused by the core collapse of massive stars and are usually referred to as stripped core-collapse supernovae. These stars have shed (or been stripped of) their outer envelope of hydrogen, and, when compared to the spectrum of Type Ia supernovae, they lack the absorption line of silicon. Compared to Type Ib, Type Ic supernovae are hypothesized to have lost more of their initial envelope, including most of their helium.

Recent findings indicate that the infrared “rings” around the W49B, as well as intense X-ray radiation, are coming from nickel and iron along its axis. These findings provide evidence that an extremely massive star exploded in two powerful, oppositely directed jets that were rich in iron. This makes W49B a prime candidate for being the remnant of a gamma ray burst that may have produced our Milky Way’s youngest black hole.

Gamma-ray bursts are produced when a massive star runs out of nuclear fuel and the star’s core collapses to form a black hole surrounded by a disk of extremely hot, rapidly rotating, magnetized gas. Much of this gas is pulled into the black hole, but some is flung away in oppositely directed jets of gas traveling at near the speed of light.

An observer aligned with one these jets would see a gamma-ray burst, a blinding flash in which the concentrated power equals that of ten quadrillion Suns for a minute or so. The view perpendicular to the jets is a less astonishing, although nonetheless spectacular supernova explosion. For W49B, the jet is tilted out of the plane of the sky by about 20 degrees.

This image is created from observations made in 61 hours and 7 minutes on August 18 until 22, 2011, and combines X-rays from Chandra X-ray Observatory (green and blue), radio data from the NSF’s Very Large Array (magenta), and infrared data from Caltech’s Palomar Observatory (yellow).