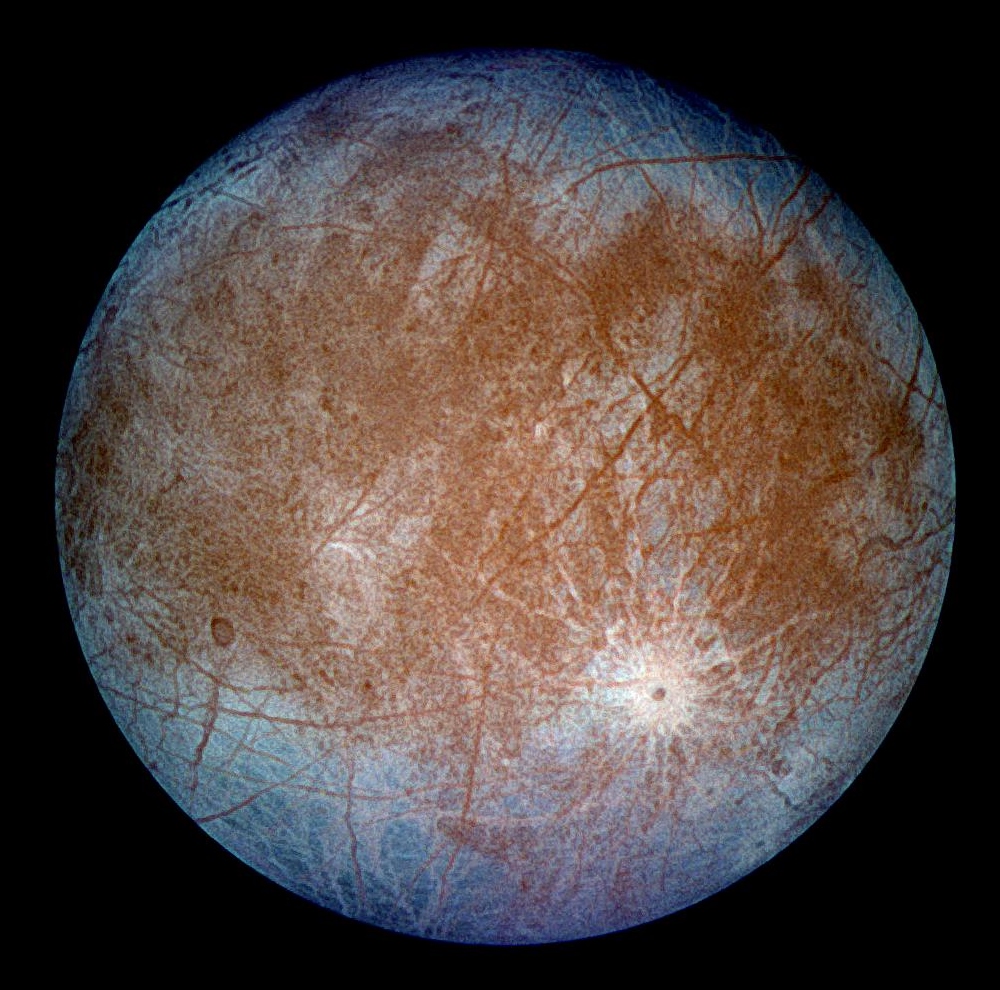 Jupiter’s moon Europa is, with just over 3,100 kilometers (1,900 mi) in diameter, slightly smaller than Earth’s Moon. It is the sixth-largest moon of Jupiter, and the smallest of its four Galilean satellites but nonetheless more massive than all known moons in the Solar System smaller than itself combined. Its density suggests that it is similar in composition to the terrestrial planets, being primarily composed of silicate rock.

This moon orbits Jupiter in just over three and a half days, with an orbital radius of about 670,900 km. The moon is tidally locked to Jupiter, with one hemisphere of the satellite constantly facing the planet. However, research suggests the tidal locking may not be full: Europa spins faster than it orbits, or at least did so in the past.

Europa probably contains a metallic iron core surrounded by a rocky mantle. Its very bright and smooth surface is striated by cracks and streaks, while craters are relatively infrequent. Dark crisscrossing bands on Europa represent widespread disruption from fracturing and the possible eruption of gases and rocky material from the moon’s interior. Symmetric ridges in these dark bands suggest that the surface crust was separated and filled with darker material.

Europa’s crust is composed of an outer layer of frozen water of around 100 kilometers (62 mi) thick, while its induced magnetic field suggests the presence of a subsurface layer, likely a salty liquid water ocean. The apparent youth and smoothness of the surface also suggests the presence of a subsurface ocean, which could serve as an abode for extraterrestrial life. Unlike on Earth, this ocean is deep enough to cover the whole surface of Europa, and being far from the Sun, the ocean surface is globally frozen over.

However, because Europa’s orbit is eccentric, the tide is much higher when it is close to Jupiter than when it is far from Jupiter. Thus tidal forces raise and lower the sea beneath the ice, causing constant motion and likely causing the cracks.

The heat energy from the tidal locking causes the ocean to remain liquid and drives geological activity similar to plate tectonics. This tidal heating also causes Europa to be warmer than it would otherwise be at its average distance of about 780,000,000 km (485,000,000 miles) from the Sun. The warmth of Europa’s liquid ocean could prove critical to the survival of simple organisms within the ocean, if they exist.

Europa has a tenuous atmosphere composed primarily of oxygen. Research suggests that there is also plenty of oxygen available in its subsurface ocean to support oxygen-based metabolic processes for life similar to that on Earth. In fact, there may be enough oxygen to support complex, animal-like organisms with greater oxygen demands than micro-organisms.

The primary ingredients for life are water, heat, and organic compounds obtained from comets and meteorites. Europa has all three. Could life have formed and even exist today?

This false-color composite image was taken on September 7, 1996, at a range of 677,000 kilometers (417,900 miles) by the solid state imaging television camera onboard the Galileo spacecraft during its second orbit around Jupiter. The image was processed by Deutsche Forschungsanstalt fuer Luft- und Raumfahrt e.V., Berlin, Germany.

Dark brown areas in this image represent rocky material. Bright plains in the polar areas (top and bottom) are shown in tones of blue to distinguish possibly coarse-grained ice (dark blue) from fine-grained ice (light blue). Long, dark lines are fractures in the crust, some of which are more than 3,000 kilometers (1,850 miles) long. The bright feature containing a central dark spot in the lower third of the image is a young impact crater some 50 kilometers (31 miles) in diameter.