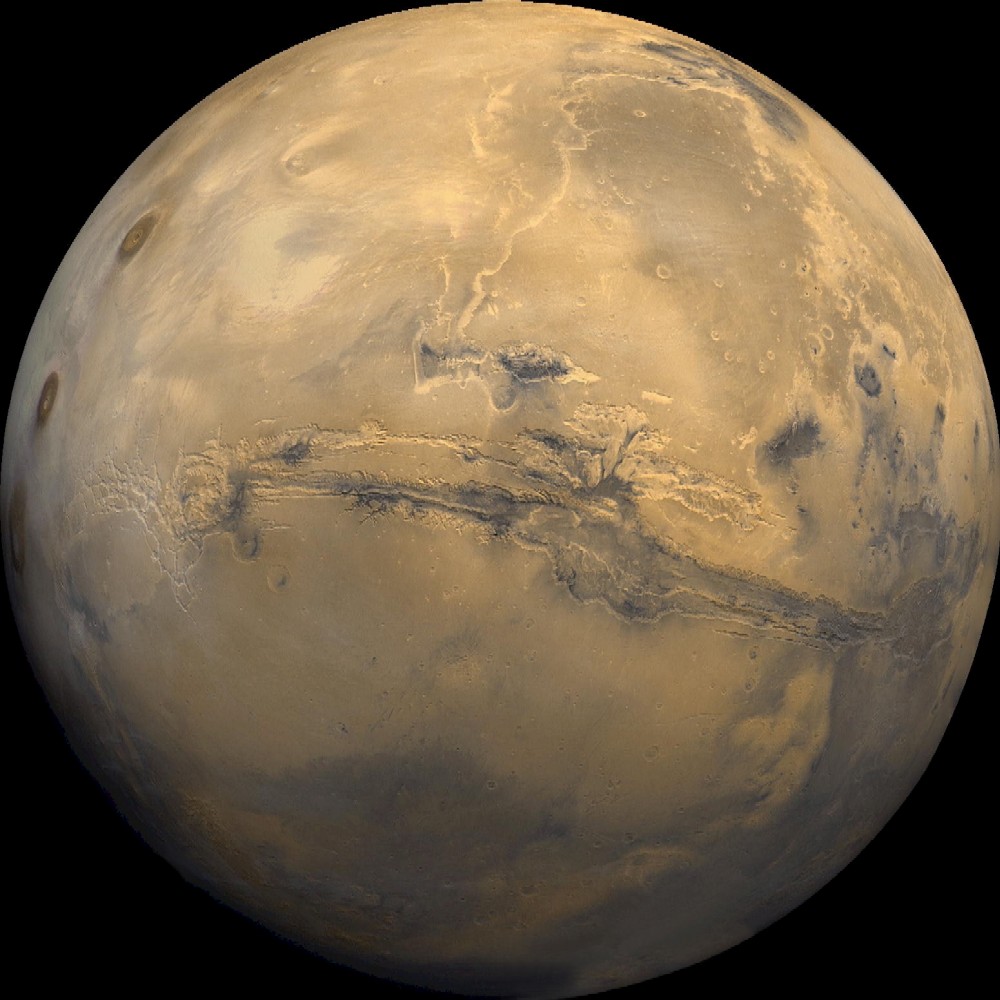 Mars is the fourth planet from the Sun in the Solar System. It has approximately half the diameter of Earth.. Mars is often described as the “Red Planet” as the iron oxide (rust) prevalent on its surface gives it a reddish appearance.

Mars is a terrestrial planet with a thin carbon-dioxide-rich atmosphere, roughly 100 times less dense than Earth’s on average, but it is nevertheless thick enough to support weather, clouds and winds. It has surface features reminiscent both of the impact craters of the Moon and the volcanoes, valleys, deserts, and polar ice caps of Earth. The rotational period and seasonal cycles of Mars are likewise similar to those of Earth, as is the tilt that produces the seasons.

Mars is known of Olympus Mons, the highest known mountain within the Solar System, and of Valles Marineris, the largest canyon. The smooth Borealis basin in the northern hemisphere covers 40% of the planet and may be a giant impact feature. Channels, valleys, and gullies are found all over Mars, and suggest that liquid water might have flowed across the planet’s surface in recent times. Water may even still lie in cracks and pores in underground rock,

Geological evidence suggest that Mars once had large-scale water coverage on its surface. Radar data revealed the presence of large quantities of water ice at the poles, and at mid-latitudes. Observations also show evidence that parts of the southern polar ice cap have been receding and have revealed possible flowing water during the warmest months on Mars.

The habitability of a world, favors planets that have liquid water on their surface and lie within the habitable zone. During perihelion Mars dips inside this region, but the planet’s thin atmosphere prevents liquid water from existing over large regions for extended periods. The past flow of liquid water demonstrates the planet’s potential for habitability. Some recent evidence has suggested that any water on the Martian surface may have been too salty and acidic to support regular terrestrial life.

Evidence suggests that the planet was once significantly more habitable than it is today, but whether living organisms ever existed there remains unknown. Tests have shown that the soil has a very alkaline pH and it contains magnesium, sodium, potassium and chloride. The soil nutrients may be able to support life but life would still have to be shielded from the intense ultraviolet light.

Small quantities of methane and formaldehyde recently detected by Mars orbiters are both claimed to be hints for life, as these chemical compounds would quickly break down in the Martian atmosphere. It is remotely possible that these compounds may instead be replenished by volcanic or geological means.

Streaks are common across Mars and new ones appear frequently on steep slopes of craters, troughs, and valleys. The streaks are dark at first and get lighter with age. The commonly accepted theories include that they are dark underlying layers of soil revealed after avalanches of bright dust or dust devils. Several explanations have been put forward, some of which involve water or even the growth of organisms. Mars also has the largest dust storms in our Solar System. These can vary from a storm over a small area, to gigantic storms that cover the entire planet.

Mars has a dense, metallic core region about 1794 km in radius, consisting primarily of iron and nickel with about 16–17% sulfur. The core is surrounded by a silicate mantle that formed many of the tectonic and volcanic features on the planet, but now appears to be dormant. Besides silicon and oxygen, the most abundant elements in the martian crust are iron, magnesium, aluminum, calcium, and potassium. The average thickness of the planet’s crust is about 50 km, with a maximum thickness of 125 km.

Although Mars has no evidence of a current structured global magnetic field, observations show that parts of the planet’s crust have been magnetized, and that alternating polarity reversals of its dipole field have occurred in the past. Also, Mars is nearly, or perhaps totally, geologically dead; the end of volcanic activity has apparently stopped the recycling of chemicals and minerals between the surface and interior of the planet.

A Martian year is about two Earth years long. Martian surface temperatures vary from lows of about −87 °C (−125 °F) during the polar winters to highs of up to −5 °C (23 °F) in summers. The wide range in temperatures is due to the thin atmosphere which cannot store much solar heat, the low atmospheric pressure, and the low thermal inertia of Martian soil.

Mars has two moons, Phobos and Deimos, which are small and irregularly shaped, and may be captured asteroids.