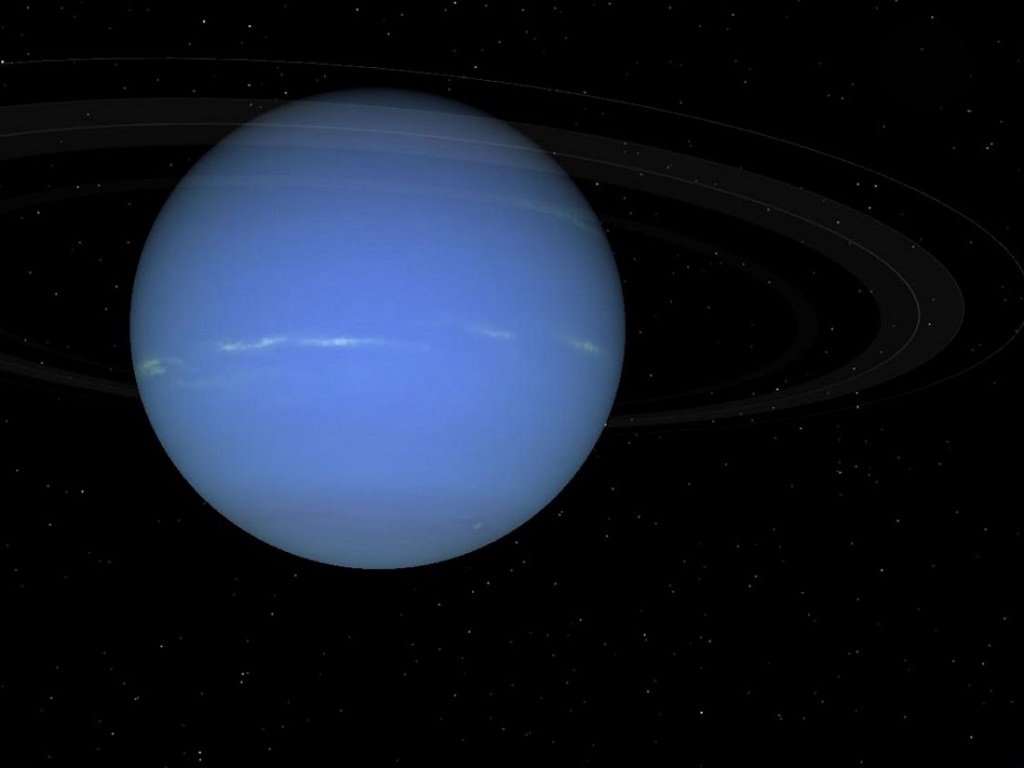 Image Credit: I just don’t know; can somebody help me with this?

Neptune, named for the Roman god of the sea, is the eighth and farthest planet from the Sun in our Solar System. The average distance between Neptune and the Sun is 4.50 billion km (about 30.1 times the Earth–Sun distance), and it completes an orbit on average every 164.79 years. From the Earth, Neptune goes through apparent retrograde motion every 367 days. Neptune is the fourth-largest planet by diameter and the third largest by mass. Neptune radiates about 2.61 times as much energy as it receives from the Sun (Uranus only radiates 1.1 times as much).

Neptune is an intermediate body between Earth and the larger gas giants: it is 17 times the mass of Earth but just 1/19th that of Jupiter. The planet’s surface gravity is only surpassed by Jupiter. Neptune’s equatorial radius of 24764 km is nearly four times that of the Earth. Neptune and Uranus are often considered a sub-class of gas giant termed “ice giants”, due to their higher concentrations of “ices” such as water, ammonia and methane relative to Jupiter and Saturn.

The interior of Neptune is primarily composed of ices and rock. The core of Neptune is composed of iron, nickel and silicates, with a mass about 1.2 times that of the Earth. The pressure at the centre is 7 Mbar, millions of times more than that on the surface of the Earth, and the temperature may be 5,400 K.

The mantle reaches temperatures of 2,000 K to 5,000 K and is rich in water, ammonia and methane. As is customary in planetary science, this mixture is referred to as icy even though it is a hot, highly dense fluid. This fluid is sometimes called a water-ammonia ocean.

Its atmosphere is composed primarily of hydrogen and helium, along with “ices” and traces of hydrocarbons and possibly nitrogen. It forms about 5% to 10% of its mass and extends perhaps 10% to 20% of the way towards the core. Increasing concentrations of methane, ammonia and water are found in the lower regions of the atmosphere.

At high altitudes, Neptune’s atmosphere is 80% hydrogen and 19% helium. A trace amount of methane is also present. Absorption of red light by the atmospheric methane is part of what gives Neptune its blue hue.

For reasons that remain obscure, the planet’s thermosphere is at an anomalously high temperature of about 750 K. The planet is too far from the Sun for this heat to be generated by ultraviolet radiation. The thermosphere contains traces of carbon dioxide and water, which may have been deposited from external sources such as meteorites and dust.

Neptune’s magnetic field is strongly tilted relative to its rotational axis at about 13,500 km from the planet’s physical centre. Neptune’s bow shock, where the magnetosphere begins to slow the solar wind, occurs at a distance of 34.9 times the radius of the planet. The tail of the magnetosphere extends out to at least 72 times the radius of Neptune, and very likely much farther.

Neptune’s atmosphere is notable for its active and visible weather patterns. These weather patterns are driven by the strongest sustained winds of any planet in the Solar System, with recorded wind speeds as high as 2,100 kilometres per hour (1,300 mph). For example, in 1989, the planet’s southern hemisphere possessed a Great Dark Spot, an anti-cyclonic storm system spanning 13000×6600 km, was discovered, comparable to the Great Red Spot on Jupiter. Some five years later Great Dark Spot was gone. Instead, a new storm similar to the Great Dark Spot was found in the planet’s northern hemisphere.

Because of its great distance from the Sun, Neptune’s outer atmosphere is one of the coldest places in the Solar System, with temperatures at its cloud tops approaching −218 °C (55 K). Temperatures at the planet’s centre are approximately 5,400 K (5,000 °C).

In 2007 it was discovered that the upper troposphere of Neptune’s south pole was about 10 °C warmer than the rest of Neptune. The relative “hot spot” is due to Neptune’s axial tilt, which has exposed the south pole to the Sun for the last quarter of Neptune’s year, or roughly 40 Earth years.

Neptune has 14 known moons. The largest by far, comprising more than 99.5% of the mass in orbit around Neptune and the only one massive enough to be spheroidal, is Triton. It has a planetary ring system as well, though one much less substantial than that of Saturn. The rings may consist of ice particles coated with silicates or carbon-based material, which most likely gives them a reddish hue. The rings have a clumpy structure, which may be due to the gravitational interaction with small moons in orbit near them. Neptune’s rings are much more unstable than previously thought. Images show considerable decay in the rings.

Neptune has been visited by only one spacecraft, Voyager 2, which flew by the planet on August 25, 1989.