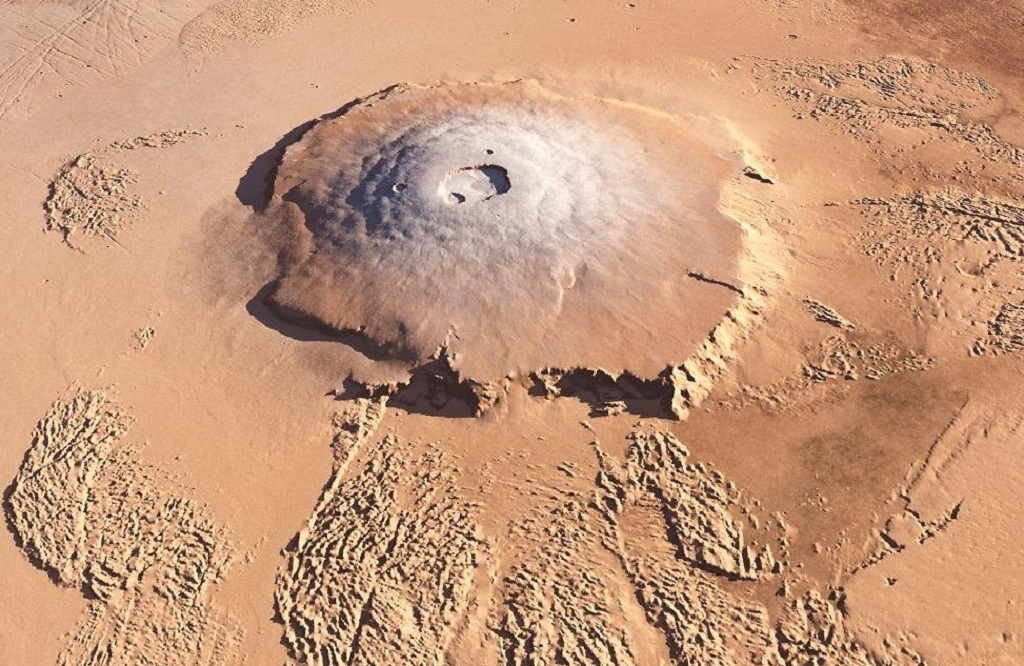 Olympus Mons is a large volcanic mountain on the planet Mars. It is about 600 km (370 mi) wide and has a height of nearly 22 km (14 mi), what makes it the tallest mountain on any planet in the Solar System, higher than three Mount Everests and spanning the width of the entire Hawaiian island chain. It is also the youngest of the large volcanoes on Mars.

Olympus Mons is located at the northwestern edge of the Tharsis region, about 1200 km from the other three large Martian shield volcanoes, collectively called the Tharsis Montes (Arsia Mons, Pavonis Mons, and Ascraeus Mons).

The extraordinary size of Olympus Mons is likely because Mars lacks mobile tectonic plates. Unlike on Earth, the crust of Mars remains fixed over a stationary hotspot, and a volcano can continue to discharge lava until it reaches an enormous height.

The shape of Olympus Mons is distinctly asymmetrical. Its flanks, with shallow slopes, are made up of innumerable lava flows and lava channels. They are shallower and extend out further from the summit in the northwestern direction than they do to the southeast.

Crater counts indicate that lava flows on the northwestern flank of Olympus Mons range in age from 115 million years to only 2 million years old, suggesting that the mountain may still be volcanically active, though in a very quiescent and episodic fashion.

Olympus Mons is a shield volcano, similar to the large volcanoes making up the Hawaiian Islands. The summit caldera (central depression) is 60 × 80 km (37 × 50 mi) across and up to 3.2 km (2.0 mi) deep, probably formed from recurrent collapse following drainage of magma resulting from flank eruptions. It is a composite of as many as seven roughly circular collapse depressions, which are the reflections of the size of the underlying magma chambers.

The volcano is surrounded by a well-defined scarp, up to 8 km (5.0 mi) tall, a feature unique among the shield volcanoes of Mars. Lava flows drape over the scarp in places. Also, there are two distinct impact craters on Olympus Mons that have been named; the 15.6 km (10 mi)-diameter Karzok crater and the 10.4 km (6 mi)-diameter Pangboche crater.

A wide, annular depression or moat about 2 km (1 mi) deep surrounds the base of Olympus Mons and is thought to be due to the volcano’s immense weight pressing down on the Martian crust. The depth of this depression is greater on the northwest side of the mountain than on the southeast side.

Much of the plains surrounding the volcano are covered by the ridged and grooved ‘aureole’ of Olympus Mons. The origin of the aureole is controversial, but they are likely formed by huge landslides or gravity-driven thrust sheets that sloughed off the edges of the Olympus Mons shield.