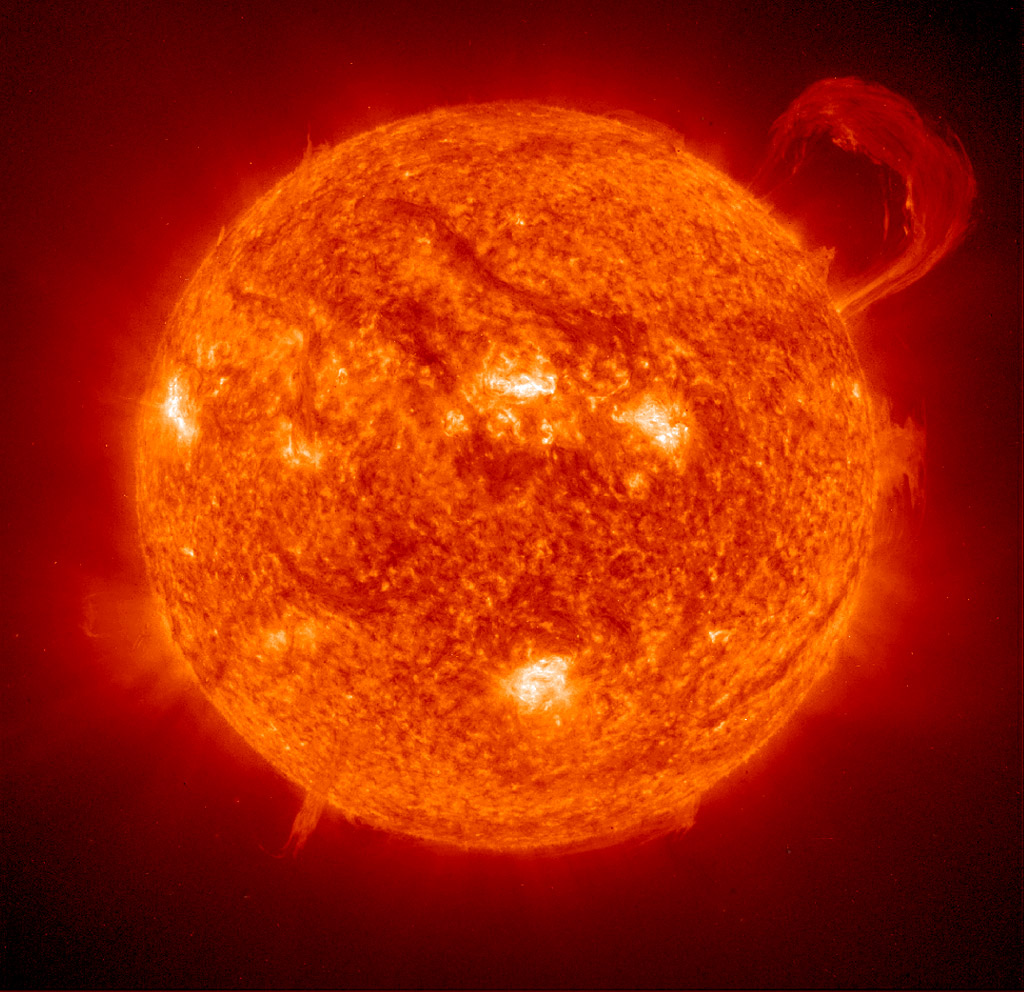 The Sun, located in the Orion Arm of the Milky Way galaxy, is the star at the center of the Solar System. It is almost perfectly spherical and has a diameter of about 1,392,684 km, about 109 times that of Earth. Its mass (about 330,000 times that of Earth) accounts for about 99.86% of the total mass of the Solar System. About three quarters of the Sun’s mass consists of hydrogen, while the rest is mostly helium. The remainder (1.69%, which nonetheless equals 5,628 times the mass of Earth) consists of heavier elements, including oxygen, carbon, neon and iron, among others.

The Sun orbits the center of the Milky Way at a distance of approximately 24,000–26,000 light-years from the galactic center, completing one clockwise orbit, in about 225–250 million years. The mean distance of the Sun from the Earth is approximately 149.6 million kilometers (1 AU), though the distance varies as the Earth moves from perihelion in January to aphelion in July. At this average distance, light travels from the Sun to Earth in about 8 minutes and 19 seconds. The energy of this sunlight supports almost all life on Earth by photosynthesis, and drives Earth’s climate and weather.

The Sun is a so called Population I, or heavy element-rich, star. The Sun was formed about 4.57 billion years ago from the collapse of part of a giant molecular cloud which probably also gave birth to many other stars. One or more supernovae must have occurred near the location where the Sun formed. The formation of the Sun may have been triggered by shockwaves from one or more nearby supernovae. This is suggested by a high abundance of heavy elements in the Solar System, such as gold and uranium. These elements have most likely been produced by the nuclear reactions during a supernova.

The Sun is also a yellow dwarf, because its visible radiation is most intense in the yellow-green portion of the spectrum and although its color is white, from the surface of the Earth it may appear yellow because of atmospheric scattering of blue light. Its surface temperature is approximately 5778 K (5505 °C), by contrast, the temperature of its core is 15.7 million K.

The Sun, like most stars, is a main-sequence star, during which nuclear fusion reactions in its core fuse hydrogen into helium. The Sun is about halfway through this stage. Each second, more than four million tonnes of matter are converted into energy within the Sun’s core, producing neutrinos and solar radiation. At this rate, the Sun has so far converted around 100 Earth-masses of matter into energy. The Sun will spend a total of approximately 10 billion years as a main-sequence star.

The Sun does not have enough mass to explode as a supernova. Instead, in about 5 billion years, it will enter a red giant phase. Its outer layers will expand as the hydrogen fuel at the core is consumed and the core will contract and heat up. Following the red giant phase, intense thermal pulsations will cause the Sun to throw off its outer layers, forming a planetary nebula. The only object that will remain after the outer layers are ejected is the extremely hot stellar core, which will slowly cool and fade as a white dwarf over many billions of years. This stellar evolution scenario is typical of low- to medium-mass stars.

The Sun does not have a definite boundary as rocky planets do, and in its outer parts the density of its gases drops exponentially with increasing distance from its center. All matter in the Sun is in the form of gas and plasma because of its high temperatures. This makes it possible for the Sun to rotate faster at its equator (about 25 days) than it does near its poles (about 35 days). Nevertheless, it has a well-defined interior structure. The core of the Sun has a density up to about 150 times the density of water and is considered to extend from the center to about 20–25% of the solar radius.

Once regarded by astronomers as a small and relatively insignificant star, the Sun is now thought to be brighter than about 85% of the stars in the Milky Way galaxy, most of which are red dwarfs. The Sun’s hot corona continuously expands in space creating the solar wind, a stream of charged particles that extends to the heliopause at roughly 100 astronomical units. The bubble in the interstellar medium formed by the solar wind, the heliosphere, is the largest continuous structure in the Solar System.

The heliosphere, which may be considered the tenuous outer atmosphere of the Sun, extends outward past the orbit of Pluto to the heliopause, where it forms a sharp shock front boundary with the interstellar medium. The layers between the photosphere and the heliospere (chromosphere, transition region, and corona) are much hotter than the surface of the Sun. The reason has not been conclusively proven. The corona is the extended outer atmosphere of the Sun, which is much larger in volume than the Sun itself. The corona continuously expands into space forming the solar wind, which fills all the Solar System. The coolest layer of the Sun is a temperature minimum region about 500 km above the surface of the Sun, called the photospere, with a temperature of about 4,100 K.

The Sun is a magnetically active star. It supports a strong, changing magnetic field that varies year-to-year and reverses direction about every eleven years around solar maximum. The Sun’s magnetic field, that extends well beyond the Sun itself, leads to many effects that are collectively called solar activity, including sunspots on the surface of the Sun, solar flares, prominences, and variations in solar wind that carry material through the Solar System. Effects of solar activity on Earth include auroras, and the disruption of radio communications and electric power. Solar activity is thought to have played a large role in the formation and evolution of the Solar System. Solar activity changes the structure of Earth’s outer atmosphere.

The most immediately visible features of the Sun are usually its sunspots, which are well-defined surface areas that appear darker than their surroundings because of lower temperatures. Sunspots are regions of intense magnetic activity where convection is inhibited by strong magnetic fields, reducing energy transport from the hot interior to the surface. The magnetic field causes strong heating in the corona, forming active regions that are the source of intense solar flares and coronal mass ejections. The largest sunspots can be tens of thousands of kilometers across.

The number of sunspots is not constant, but varies over an 11-year cycle known as the solar cycle. At a typical solar minimum, few sunspots are visible, and occasionally none at all can be seen. Those that do appear are at high solar latitudes. As the sunspot cycle progresses, the number of sunspots increases and they move closer to the equator of the Sun. The solar cycle has a great influence on space weather, and a significant influence on the Earth’s climate since the Sun’s luminosity has a direct relationship with magnetic activity. Solar activity minima tend to be correlated with colder temperatures, and longer than average solar cycles tend to be correlated with hotter temperatures. A recent theory claims that there are magnetic instabilities in the core of the Sun that cause fluctuations with periods of either 41,000 or 100,000 years. These could provide an explanation of the ice ages.